There's no shortage of great mirrorless cameras these days, so why are Canon and Nikon so afraid to jump in?

Share All sharing options for: How mirrorless camera upstarts are beating the giants at their own game

Mirrorless cameras are a great solution to the biggest problem facing the camera industry — with smartphones obviating the need for dedicated compact cameras, the promise of a huge leap in image quality without the bulk of a DSLR is a compelling one. The numbers back it up, too, with research firm IDC reporting rapid growth for the category; in Japan mirrorless cameras make up around half of all interchangeable-lens camera sales, an undoubtedly worrying figure for traditional DSLR leaders Canon and Nikon. However, the camera makers themselves have often seemed unwilling participants in the revolution, hamstrung by history and an inability to let go of the past.

Camera manufacturers are hamstrung by a proud history

Companies like Nikon, Canon, and Pentax have spent the better half of the past century producing excellent single-lens reflex cameras with a dedicated fanbase and a wide-ranging selection of quality lenses. Mirrorless cameras, however, require the SLR mechanism to be jettisoned, ideally along with the lenses; cameras like Olympus' PENs and Sony's NEX series achieve their small size by reducing the distance from sensor to lens, which necessitates new native optics. This poses a tough question for traditional SLR makers. How can they leverage their history while producing a solid product for the present?

Answers until now have been underwhelming at best. Nikon's 1 series cameras, for example, offer sub-par sensors and lenses inside a sleek shell almost devoid of physical controls. They can't hope to compete with DSLRs, and you have to think that's exactly what Nikon was afraid of doing. While sales have been strong, the company's new breed of cameras don't have much to offer the DSLR-savvy enthusiast. It's not like Nikon is a completely innovation-free zone — we just saw the Android-powered Coolpix S800c, for example, but even that seems to have been blindsided by Samsung with its sleeker, faster, more up-to-date Galaxy Camera. 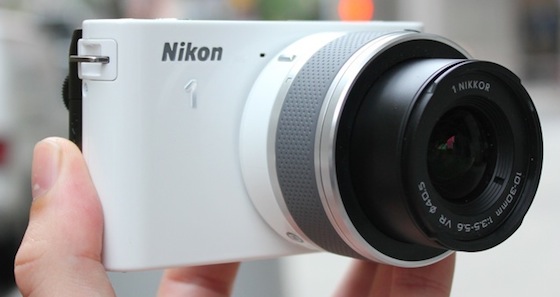 Other manufacturers have faced similar struggles. Pentax's K-01 maintains compatibility with the company's SLR lenses and takes great pictures, but has a huge body that barely qualifies as a downsize. The Q, meanwhile, is a tiny, beautifully constructed $800 camera with an equally tiny sensor that gives results on par with an average point-and-shoot. The wildcard is Canon, the world's biggest DSLR maker, whose upcoming EOS M looks like a technically strong product based on the excellent T4i. Its touchscreen-heavy interface probably won't endear it to enthusiast photographers, however, and Canon's refusing to even call it a mirrorless camera; in the US, it's being positioned as a video-focused device. The company's reticence to enter the new market early has also left its lens division in the unenviable position of having to play catch-up to the likes of Sony. Had Canon released a small mirrorless camera with a large sensor and photographer-friendly physical controls around two years ago, we wouldn't be having this conversation.

The Nikon 1 series has a skin-deep beauty

It's hard to see how these products could have been designed the way they were if not for a deep-seated conservatism at the heart of the companies. The Nikon 1 series, especially, has a skin-deep beauty that may look good on store shelves but does little for user experience or picture quality. The simple fact is that the best products in this segment are being produced by companies with two important things in common: a lack of marketshare to lose and a history of engineering chops. Olympus, Sony, and Panasonic have all made clean breaks with their past to create new, truly digital systems from the ground up that don't rely on outdated lens designs. Sony and Panasonic in particular are well-suited to the design of mirrorless cameras, which in some ways have more in common with gadgets than traditional SLRs. The ability to create vertically integrated products drawing upon all aspects of a company's expertise shouldn't be underestimated, and it's the reason Nikon is left to go shopping at Sony for most of its sensors these days.

Olympus, Sony, and Panasonic have proved that the best way to take on the mirrorless market is to start from scratch. Olympus joined forces with Panasonic to create Micro Four Thirds, which carries some DNA from the old Four Thirds system but is basically an entirely new standard with newer, smaller lenses to match. The result has been innovative and diminutive cameras like the OM-D E-M5 and Lumix GH2. Sony went a similar route by creating a new system with the same sensor size as its Alpha SLRs, and while its NEX series doesn't quite have the lens support yet, the cameras have an unbeatable combination of image quality and design. In fact, Sony's camera division is arguably the only part of the company that's operating at anywhere near the level of its former glories, which certainly isn't a prediction anyone would have made five years ago.

Nikon, Canon, and Pentax are still producing excellent cameras today in the DSLR segment, of course — we saw the likes of the D600 and 6D at Photokina this week, and the audience for such products is unlikely to go away any time soon. Though such cameras are far from consumer-focused, the introduction of relatively inexpensive full-frame DSLRs could well make enthusiasts think twice before ditching the mirror. For the more casual photographer, however, it can't be too long before smartphones catch up to the likes of the Nikon J1, nor can it be much longer before electronic viewfinders match the clarity of optical. With mirrorless offerings turning the heads of more and more consumers, we have to wonder how much longer the incumbent camera leaders can trade on past achievements. Indeed, how long before the most trusted brand in digital photography is NEX or PEN, not EOS?