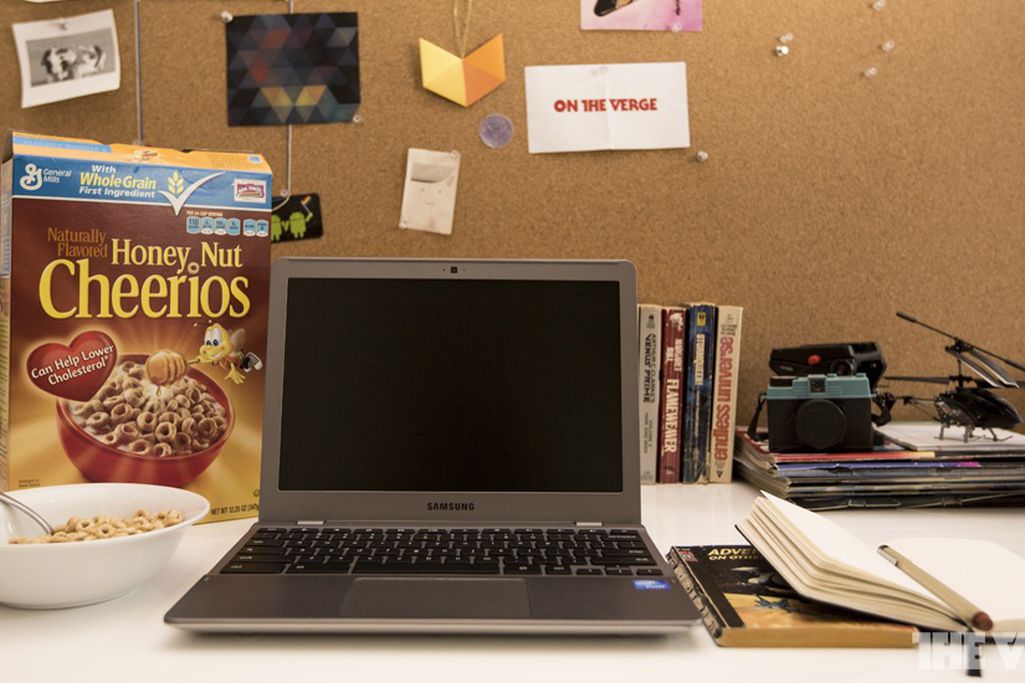 Just over three months ago, I woke up to find that the display on my trusty HP EliteBook 6930p was broken. I’d left the machine — a faithful companion since my second year at university — on the floor of my apartment during a party, and, from the profile of the crack, it looked like it had come into contact with somebody’s foot. With replacement LCDs for the bulky model costing upwards of $80 on eBay, I decided to consign it to a corner of my room and look for something new.

The problem was money. Less than a year out of college, I’d spent months paying extortionate London rent on minimum wage — with virtually no disposable income, I ended up taking my generic, work-issue laptop home with me for almost a month to avoid eating into my meagre savings. Still, I wanted something new and shiny, and the accident just happened to coincide with the launch of the Samsung Series 5 550 Chromebook, the latest in Google’s line of cheap, cloud-centric laptops.

I’m probably something of an atypical computer user — when I acquired the uber-corporate, brushed-metal EliteBook second-hand, I immediately wiped Windows 7 and installed Ubuntu, aping the setup that I’d favored on an even older HP machine since about 2008. While some find it unpolished, Ubuntu is a glorious mix of beautiful simplicity and fist-shaking complexity. On top of the fiddly Linux kernel, much of which I’d managed to master as an obsessive teenager, the Unity UI — standard since April 2011 — offers an interface comparable with the best bits of Mac OS X or Windows. And as both Mac OS X and Windows begin to migrate towards the brave new App Store model for software discovery and installation, people seem to forget that Linux distributions have been using package managers for decades.

Spending my days writing for a site covering web development and design, I liked to think of myself as an all-browser guy. Between Gmail, Google Docs, Google Calendar, and our CMS, I had virtually no reason to leave Chrome — for Twitter, I’d use TweetDeck’s Chrome app; for testing out code, I’d use the web-based IDE Cloud9; for transcribing interviews, I’d use Wreally Studios’ lightweight Transcribe app. I was a card-carrying member of the HTML5 club, and native apps were beginning to seem more and more anachronistic with each passing day.

Of course, spending a lot of time in Chrome isn’t enough to justify buying a Chromebook — I could easily have continued running the browser in Windows or Ubuntu. But as the idea of switching to Chrome OS matured in my mind, I became increasingly impatient with the extraneous features and restrictions full-blown operating systems forced on me. Even Windows 8 Consumer Preview, which I ran on my work laptop, took a good 20 seconds to boot, then required four or five clicks to get to the browser. 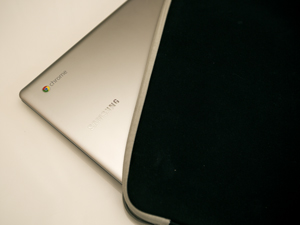 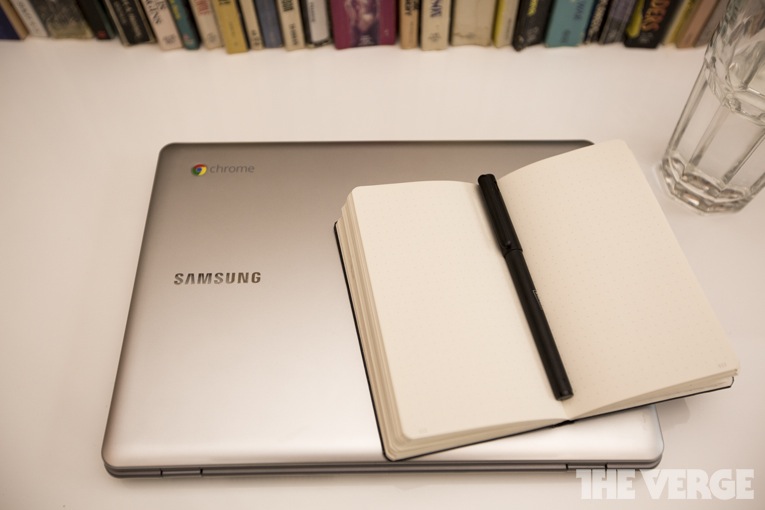 When I headed to the “Chrome Zone” (seriously) at my local PC World retailer for a recon mission, the assistant on duty was realistic in his assessment of the products — he made an effort to wow me with the Series 5 550’s startup speed, but he also made clear some of the device’s limitations (a demo of Photoshop Express didn’t go quite to plan). Still, live demos are one of the biggest things that the latest generation of Chromebooks has going for it. At PC World, the 550’s hardware helped it stand out against everything else in the store.

To its right, the previous generation of Chromebooks offered the same operating system for $120 less, a major issue when Google’s marketing is so relentlessly OS-centric (“the computer that gets better over time”). Still, they were unavoidably plasticy, and offered much less impressive specs. Arrayed in their own special section to the rear of the Chrome Zone, the ultrabooks were also tempting, but, again, I was struck by the lack of build quality — the display on the Acer Aspire S3 wobbled with every single tap on its distinctly mediocre chiclet keyboard, while higher-end and better-built models such as the Asus Zenbook were out of my price range.

Finally, the corner of the store reserved for the MacBooks began to make its siren’s call. Here, as with the high-end ultrabooks, the determining factor was price. 30 seconds with the 11-inch MacBook Air is enough to realize that it’s a much higher-quality device than any Chromebook, with the chassis, display, keyboard, and trackpad all comfortably top-class. But it costs at least $999, and the step up in build quality was not quite remarkable enough to justify the expenditure.

Having already convinced myself of the benefits of the software, a hands-on session with the Series 5 550’s hardware finally pushed me to pull the trigger. I left the store, waited a few days, then dropped $600 on the Wi-Fi version.

The limitations of Chrome OS first started to show when I attempted to use IRC. A system more associated with 1337 hackers than media work, IRC is nevertheless reliable, simple, and secure, making it a solid choice for The Verge’s day-to-day internal communications. But when I tried to access the Verge server using Mibbit on the evening before my first day, I wasn't able to connect — disappointingly, this seemed to be a common theme among lightweight, web-based IRC clients.

After hours of fretting — at my darkest point, I considered booting the Chromebook into developer mode, opening up a Linux shell and somehow installing the text-mode client Irssi — I discovered IRCCloud, a good-looking client written in JavaScript and Erlang which worked with our server. While the app is currently in beta, backend developer Richard Jones was kind enough to offer me an invite on request — but to access our password-protected server, I had to buy a $5 / month subscription. It’s not much, but it’s $5 more than I’d have to pay if I was back on Ubuntu, or if I’d spent my money on a mid-range Windows machine.

My second major workflow issue was less surprising. If there’s one piece of missing functionality that gets brought up more than anything else in Chrome OS, it’s image editing. While the system’s inbuilt preview tool is intuitive, it’s also extremely limited, offering simple cropping, brightness adjustment, rotation, and an “auto-fix” button. Cropping is done by hand, without the ability to enter pixel values, and things like layers and effects are out of the question.

When I first needed to watermark a photo for the site, I headed straight for Aviary, which was, until its shutdown on September 15th, one of the more more established web-based photo editors. Once I got past the considerable hassle of uploading and downloading every image that needed editing, it was actually a very functional web app, offering far more than I expected: layers, transparency, filters, and the famous magic wand tool. Batch processing, though, could only be described as painful. It took me nearly an hour of upload, drag, drop, export, download, rinse, repeat just to ready 20 pictures for my ZTE Grand X review in July. 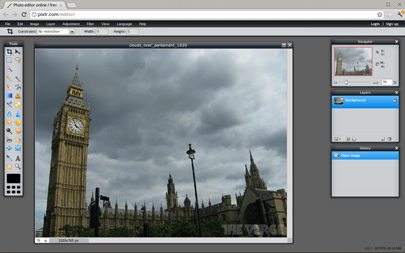 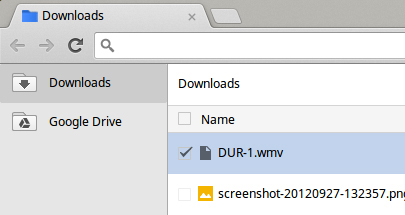 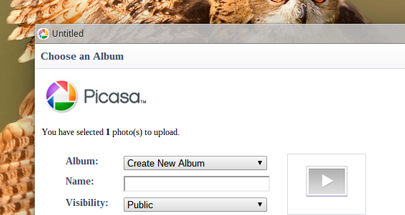 If image editing is a major and predictable pain point, there are 101 less obvious problems that emerge in the course of everyday use. One of these, for me, was web conferencing. Clicking on a GoToMeeting invitation link, I was disappointed — though, on balance, not exactly surprised — to be confronted with the news that my operating system wasn’t supported. The same occurred when I first tried to jump into an ad-hoc conference call on Teamspeak. In both cases, I resorted to downloading the relevant Android app and participating through my phone — hardly an ideal solution.

A few weeks ago, I was given a link to a WMV video — Chrome OS wouldn’t play it. While it’s technically possible to upload videos to a private Picasa folder and stream them back, my connection was poor and I didn’t have time. The result? Again, I used my phone. When your Android smartphone is, nine times out of ten, more functional than your laptop, it’s difficult not to start thinking there’s something wrong. 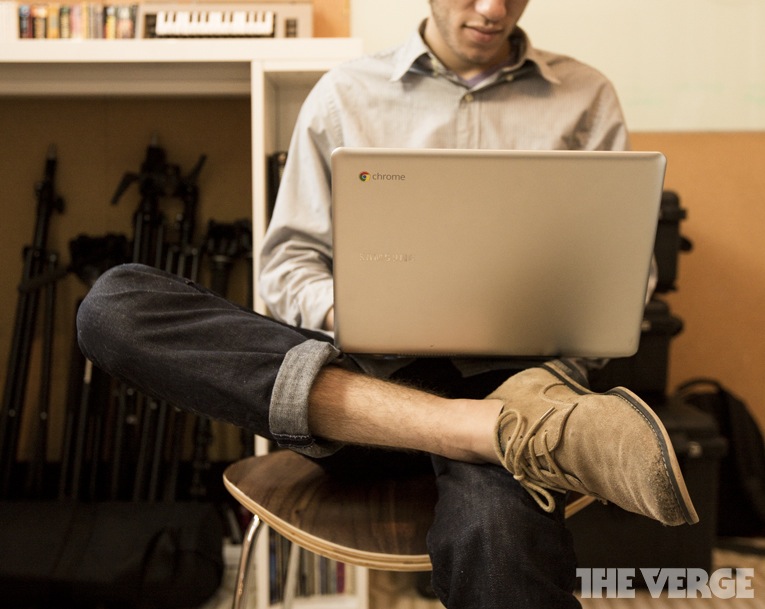 Despite these major issues, I haven’t yet been fired. I still use the Chromebook for work six days a week, and have managed to sort out a workflow that just about keeps my head above the water. IRCCloud is constantly open in a full-screen background window, popping up notifications when necessary — for short news posts, I write directly into our CMS. Having switched to Pixlr for image editing, I’ve already developed a sort of muscle memory for its loading times and delays, and have even taught myself a few shortcuts which make it perfectly functional for minor photo work.

As with any device, there are good days — sometimes I feel like I live in a Google ad. Writing a long article, like this one, in a full-screen Google Doc is a dream. Close the lid and it’s gone; open it again and it’s right there in less than two seconds. If I’m cooking, reading, or watching TV and I want to make a quick change, I open up Google Drive on my phone. When I want to get feedback from editors, I just share the document and view comments as they come in. Best of all, I can carry my Chromebook around the house with one hand, or slip it into my bag without having to worry about dedicating serious space. 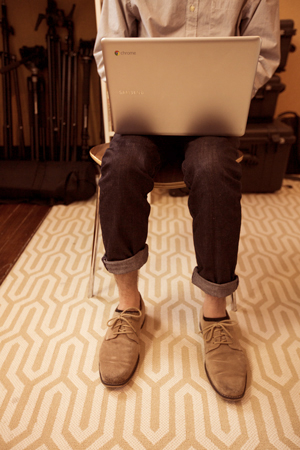 Ultimately, the Series 5 550 offers a rare pleasure in the crowded laptop market: the ability to feel smug about owning a small, thin, good-looking device — with an unambiguously great keyboard and trackpad — for a fraction of the cost of a mid-range MacBook or Windows ultrabook. Watching me use the Chromebook at a barbecue recently, a friend unexpectedly commented, “That’s a very slim laptop,” and I’m not ashamed to admit that I felt a twinge of pride at the remark.

But while this is arguably the Chromebook’s biggest advantage, it’s also what makes it a dangerous trap for the vast majority of users. With Chrome OS, Google has presented its own vision of the future of computing — utopian or dystopian, depending on your perspective — but it’s just that: a vision. For all but the lightest, web-focused users, the OS will present major problems, many of which are hard to notice until they emerge in regular use. While Google has had more than three years now to fix the more obvious issues, the amped-up Chrome OS release cycle ensures that new ones emerge just as soon as the old ones disappear.

If there’s a tendency that’s common both to current Chromebook users, including myself, and to many of those considering purchasing a device, it’s self-deception: a willingness to mask obvious defects and gaps in functionality with irrelevant and often spurious advantages. When somebody sees my 550 and asks me whether I’d recommend it, they’ve quite often already made up their mind to buy one, and are simply looking to assuage the gnawing doubts. Will I be able to survive without Photoshop? What if I get the urge to play Counter-Strike?

Next month, I’ll be stepping back from my weekday activities at The Verge to study for a master’s degree, and I’m hopeful that academic work will be an area where the Chromebook’s combination of simplicity, portability, and ease of use will finally allow it to shine. For reading PDF copies of journal articles, taking notes in libraries, and writing the occasional paper, this device should be perfect. For serious media work, it’s just not right.