Disruption can only be a good thing for the perennial underdog

Share All sharing options for: AMD sees opportunity in 'chaos' of Windows 8

The release of a new version of Windows always brings about a major upgrade cycle for the PC industry, transforming it in its wake. But Windows 8 looks set to bring about even more dramatic change than usual: a new touch-centric user interface, a deluge of new device sizes and shapes, and, for the first time ever, support for ARM processors make the newest Windows the most revolutionary update that Microsoft has ever attempted. This, says AMD's Leslie Sobon, can only be a good thing for underdogs like her company.

Describing the recent history of the PC processor market as "a juggernaut situation" — where Intel's sheer size and scale allow it to maintain an unassailable lead every year — AMD's Corporate VP for the Desktop Product Line welcomes the "chaos" and unpredictability that Windows 8 brings. Come October 26th, we still won't know the best form factor for using the new operating system and there will still be questions about the advantage of using an ARM processor over the legacy-friendly x86 options from Intel and AMD. Contrast that with prior Windows launches, where a "Compatible With" sticker and the latest benchmarks were usually enough for Intel to comfortably keep its market lead.

AMD thinks it now has the ammunition to overcome its nemesis, though its strategy is subtle and, as Leslie puts it, part of a "marathon not a sprint." With Windows 8, the company promises better gesture recognition than its competitors — pointing to its success with powering Microsoft's Kinect gestures on the Xbox — more efficient video performance, and a universally better price-performance ratio. The emphasis, reiterated multiple times by Leslie, is on having the best user experience at the best price. AMD's focus is firmly set on the high-volume market and she sees the $500 price point as the key battleground.

"We don't really have a tablet phenomenon, we have an iPad phenomenon."

Users, says Leslie as she gently taps the lid of my MacBook Air, don't care about who makes the components inside their machines. They care about the experience they get from those machines — how long they last on a charge, how swift and responsive their interface is, and how much that costs them. To illustrate her point, she notes that "we don't really have a tablet phenomenon, we have an iPad phenomenon." On the desktop, Apple's GPU-accelerated OS X and Microsoft's similar move toward more hardware-accelerated graphics are both welcomed by AMD, whose strength remains deeply rooted in graphics performance. In Leslie's words, "we'll win when things are GPU-accelerated."

Windows 8, however, is only part of the disruption anticipated by AMD, who is fully aware of the "paradigm shift in how we define a PC." Beyond the transition away from desktops to more mobile computers, we're also seeing the redefinition of what we mean by PC performance. The tasks we now use our computers for are growing more and more computationally intensive, which plays into AMD's strategy of offloading tasks to the graphics card — or in the case of the company's Accelerated Processor Units, to the graphics portion of the chip. GPUs are far more efficient than CPUs, so the more you can do with them, the less power and complexity your chip will require. That's the marathon part of AMD's vision, and it relies on finding more support for its APUs among developers. AMD feels good about its chances, having seen tens of APU-friendly apps in 2011 turn into hundreds in 2012 and forecasting thousands for next year. In short, the more sophisticated and GPU-friendly software becomes, the bigger AMD's opportunity to distinguish itself from both Intel and the oncoming horde of ARM processor makers. 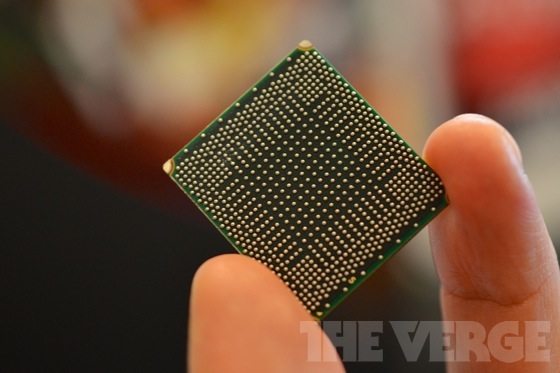 Though it's keen to get back on the right track, AMD's ultimate goal seems weirdly muted compared to its direct competitors. Intel, Nvidia, and Qualcomm are all working hard to brand the devices using their hardware, insisting on seeing their names on product packaging and, quite often, during bootup sequences. AMD is going the other way, with Leslie saying it's more important to the company to help its hardware partners brand and distinguish their products with a quality user experience. Somewhat akin to Texas Instruments' withdrawal from the consumer chip market, AMD is more concerned with keeping the direct buyers of its processors happy rather than informing the end user. In the end, if the AMD user experience is indeed noticeably superior to the competition, that will pay off no matter what label is placed where.

"The playing field is getting ironically more level than people think."

In echoing the words of her colleague John Taylor, Leslie Sobon is undoubtedly sticking to the company line of presenting confidence in the face of obvious adversity and uncertainty, however it's difficult not to agree with her premise. A structured and orderly progression from year to year is exactly what's kept Intel so steadily ahead, and the disruption brought about by ARM's entry into the PC space and Microsoft's reimagining of Windows should indeed create opportunity. "The playing field is getting ironically more level than people think," says Leslie, all bright-eyed and full of optimism. You don't need to share her hopefulness to be excited by what's to come over the next few months, whether it's AMD or someone else who seizes the opportunity opened up by Windows 8.