If a device has a screen, sooner or later someone will try to put a game on it. So even though the iPhone may not have been designed with gaming in mind, its sheer ubiquity has turned it into a disruptive force in mobile gaming and a legitimate contender to more traditional game companies like Nintendo. But before Angry Birds and Temple Run became household names, developers attempted to exploit the gaming potential of another ubiquitous Apple device — the iPod. You know, the one with the click wheel and no touchscreen.

Classic iPods had games prior to 2006, but they were the kind that came built into the device — a Breakout clone imaginatively called Brick, for instance — and of course there was solitaire. They were games you might play because they were there but not the kind you'd actively seek out. But in September of that year the iTunes store was updated with a new feature, letting you actually purchase new games specifically designed with an iPod in mind.

The first batch of releases wasn't exactly exciting. Classics like Pac-Man and Tetris managed to spread to yet another platform, but it was immediately clear that the iPod's interface wasn't suited to many (if not most) traditional games. If you thought a touchscreen offered poor controls, just try using a click wheel. Getting Pac-Man to turn corners was a pain, as was getting your Tetris blocks to fall exactly where you wanted them. In spite of the obvious difficulties in developing for the platform, though, some notable creators saw the iPod as a great new opportunity. "Of course the iPod will be successful game hardware," Masaya Matsuura, creator of influential music games like PaRappa the Rapper and UmJammer Lammy, told Wired in 2007. 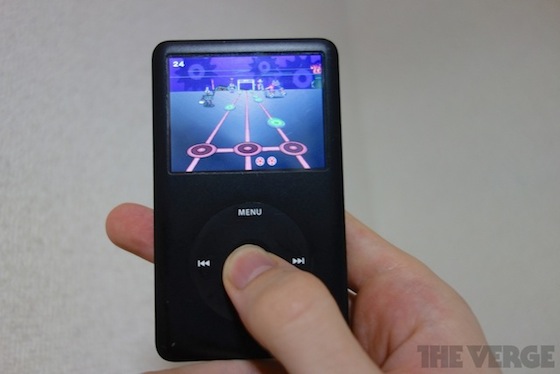 Unsurprisingly, it was a music game that proved to be the first great release on the platform. In late 2007 Harmonix, best known for music-focused series like Rock Band and Dance Central, launched a game that played precisely to the iPod's strengths with Phase. It was essentially a simplified version of Guitar Hero without the need for an extra peripheral, letting you use the click wheel to hit notes in time to the music. Not only did the controls work well, but the game also used your own collection of songs to create new stages. Not a bad idea for a device designed to hold your entire music library.

According to Harmonix's Kasson Crooker, Phase actually started as somewhat of an experiment. "We were in the midst of working on Guitar Hero, and one of the things we were really interested in doing was seeing if there was an opportunity for some gameplay where you could play the game with any song that you owned," he says, referring to a technology known as music information retrieval, or MIR. "There was a lot of interest here in trying to solve that problem."

A small team created a prototype for the PSP, before the game eventually made its way to the iPod. However, while the game itself was a relatively simple experience, the process of creating it was anything but. The limitations of the hardware meant that many features, such as 3D visuals or any sort of real audio feedback during gameplay, had to be cut. To make matters worse, the small team only had one developer unit for most of the process, making playtesting very difficult. "We actually ended up cobbling together our own input simulator," says Chris Foster, who was also part of the development team. Creating the improvised Phase controller involved taking a bandsaw to a keyboard with a built-in trackpad, while using precisely cut Post-it Notes to represent the click wheel. "We're really high-tech here," adds Crooker. 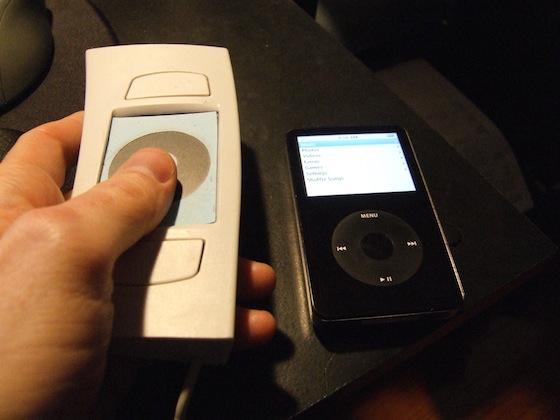 The sheer difficulty in developing for the platform was likely at least one of the reasons that the iPod never saw very many truly great games. "I think a lot of it is the technical difficulties," says Foster, adding that "I don't think it was an open platform so you had fewer people trying to make games."

No matter the reasons, the majority of the titles that were ultimately released for the iPod weren't very good. They ranged from uninspired (and hard to control) takes on sudoku and mahjong to terrible licensed games based on Lost and CSI. Even many promising titles proved to be a bad fit for the platform. A port of Sonic the Hedgehog looked the part, but controlled as badly as you'd expect, while Matsuura's own Musika proved to be little more than a glorified music visualizer with some mild interactivity.

Aside from Phase, possibly the most fondly remembered game on the platform was a port of an already popular title. "Peggle was amazing," says Foster, referring to the Popcap-developed puzzler. What made the iPod version so great was just how well the controls matched the gameplay, which involves clearing away pegs on screen by firing a cannon. In fact, the controls might just make the iPod version the definitive one.

"Spin the wheel and the wheel in the game spins."

"Peggle click wheel was the best version of Peggle because there was no abstraction in the controls at all, unlike almost every game controlled traditionally with a joypad or mouse," says Simon Flesser, one half of indie studio Simogo, the team behind iOS hits like Bumpy Road and Beat Sneak Bandit. "It literally felt like the wheel and the cannon were connected physically, like there was some contraption inside your iPod that connected them... spin the wheel and the wheel in the game spins."

Perhaps the biggest surprise was a game from Final Fantasy creator Square Enix called Song Summoner: The Unsung Heroes. While the likes of Phase and Peggle weren't particularly complex, Song Summoner was the opposite: a full-blown strategy role-playing game featuring turn-based battles, unit creation, and an actual story. It wasn't as good or as deep as, say, Final Fantasy Tactics, but it was surprisingly playable. And in a nod to the platform it was released on, the units you brought into battle were actually created from songs in your library, adding a fun new wrinkle to the creation process.

Song Summoner was able to find somewhat of a second life with a subsequent re-release for the iPhone, but other iPod games weren't so lucky. As quickly as the platform arrived it faded away. A few forgettable games from usual suspects like EA and Gameloft were released in late 2008, but as the iPhone ramped up iPod games were unceremoniously abandoned. Today you can't even purchase or re-download them as that section of the iTunes store has been completely removed.

"It's kind of heartbreaking."

It's a sad state of affairs for those of us who may want to play another round of Phase for nostalgia's sake, but iPod gaming has continued to live on, only without the wheel. Millions of us play games on our iPhones and iPads, but it's the iPod touch that Apple now touts as the "hands-down, thumbs-up, most popular portable gaming device in the world." In fact, for some, developing for the iPod helped prepare them for the impending rise of mobile — not just in terms of hardware, but also with regards to demographics. "The audience isn't necessarily going to be gamers, so a level of complexity isn't fundamentally welcome," Foster said of Phase's target audience. "They're listeners first and players second."

That may have had a small influence on some of the amazing mobile games that are available today, but that's likely a small consolation to those looking to experience Peggle the way it was meant to be played, but have no way to get their hands on the game. "It's kind of heartbreaking," says Foster.