In China, the hardships faced by factory workers tasked with the production of high-demand electronics like the iPhone have long been a reference point for popular Western perceptions of third world labor. But even Apple's mass-produced objet d'art, commonly regarded as the foremost symbol of outsourced manufacturing, sits small against the large and complex backdrop of China's dramatically evolving labor landscape.

The riots which roiled Foxconn's Taiyuan factory earlier this week are undoubtedly part of that evolution. The turmoil was originally reported as having escalated from "a personal dispute between several employees." But despite Foxconn's claims that the 2,000 person revolt was "not work-related," a Wall Street Journal report found many workers citing general dissatisfaction and high tensions between workers and the factory's brutal security guards as cause for the violence.

"Worker resistance has gone from defensive to offensive."

"In just a few years, worker resistance has gone from defensive to offensive," writes Eli Friedman, a scholar of China at Cornell University's Department of International and Comparative Labor. "Seemingly small incidents have set off mass uprisings, indicative of generalized anger. And ongoing labor shortages in coastal areas point to deeper structural shifts that have also changed the dynamics of labor politics."

Li Qiang, founder of New York-based NGO China Labor Watch, says "a growing sense of protecting their own rights" is what distinguishes today's laborers, whose anger and dissatisfaction have become far more apparent as demand for high-ticket electronics in the West continues to increase exponentially.

"They might not [have] realized what kind of rights they could enjoy in the past, but are now gradually [becoming] aware of such issues," wrote Qiang in an email. That's due in part to the fact that China's current workforce is generally younger, brasher, and more optimistic than their stoic and resigned forebears.

Over the past decade, labor strikes in China's electronics manufacturing sector have become commonplace, and workers have begun actively demanding higher wages, better working conditions, and even representation within China's state-run labor unions. Qiang says that strikes are “unorganized and temporary,” and typically don’t have any immediately discernable effects. But in more extreme cases, when the purposely ineffective legal system has failed them, workers have taken to streets, blocked off major highways, and even attacked police stations to protest unfair treatment.

In some ways, they've been successful: in companies like Foxconn, the country has seen annual double-digit wage increases hovering at around 14 percent in recent years, and the work week in at least one major factory has been reduced to only five days. Workers are now seizing the opportunity to level the playing field even further, voicing demands that earlier generations would not have dared to make.

But despite all this, day-to-day factory life remains cruel and oppressive, and many workers, despite being subject to thuggish factory security guards and long, grueling hours of (often unpaid) compulsory overtime, still make just barely enough to cover living costs within the factories' massive, city-like dormitories. A recent report from labor watchdogs Students Against Corporate Misbehavior (SACOM) found many of these old abuses to be the norm at Foxconn after interviewing employees outside factory grounds. 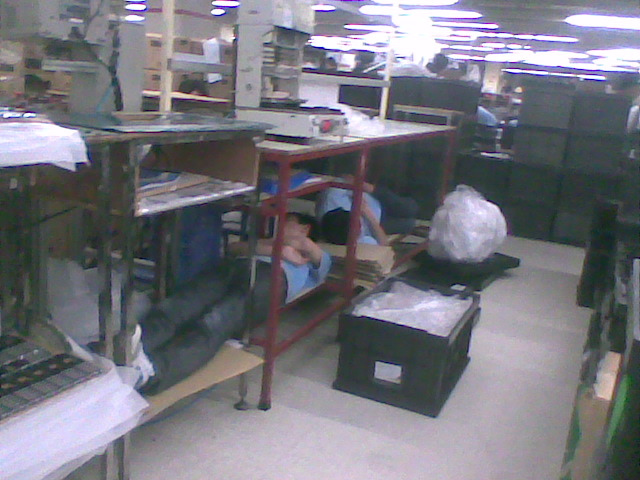 It's worth noting, however, that Foxconn gives employees dramatically higher wages when compared to the majority of electronics manufacturing companies. In Western media, the Apple brand is frequently a honeypot for coverage on China's labor issues. But the fixation often overshadows vast and far more egregious abuses that are still the norm elsewhere within China's colossal manufacturing sector.

Earlier this month, China Labor Watch published a far more damning yet comparatively under-reported investigation which found "severe labor abuses" including use of child labor at factories owned by Samsung. The previous month, the group reported similar conditions at HEG Electronics, a supplier for Samsung, Motorola, and LG. Even less reported was a release from the Institute for Global Labour and Human Rights, which revealed a laundry list of human rights violations at a VTech factory in Guangdong.

With the global economic slowdown, long-held Western perceptions of Chinese workers — as inhabitants of a some other plane, forever consigned to toil for the benefit of developed nations — are seeming increasingly short-sighted and inaccurate. "By depicting Chinese workers as Others — as abject subalterns or competitive antagonists — this tableau wildly miscasts the reality of labor in today’s China," writes Friedman. "Chinese workers are facing the same brutal competitive pressures as workers in the West, often at the hands of the same capitalists."