Facebook gives Gifts another shot, guarantees no ugly sweaters in the wrong size

Share All sharing options for: Facebook gives Gifts another shot, guarantees no ugly sweaters in the wrong size

Facebook today announced Gifts, a new way to send chocolates, Starbucks cards, clothing, flowers, and other items to friends. "One of the challenges with sending physical gifts is that you have to know someone's address, shirt size, or the flavor they like, or you guess and then you're wrong," Facebook's Lee Linden says. "We've turned that on it's head, removing the friction of sending somebody a physical product." Facebook's new Gifts platform lets the recipient know before they receive your gift so they can plug in their address, and even their shirt size dark / milk chocolate preference if you don't know it. If the recipient isn't happy with your gift, they can instantly exchange it for something else inside Facebook's catalog of items from partners like Warby parker, Uber, Starbucks, GUND, Magnolia Bakery, and 1-800-Flowers.

A gift recipient can change their address, as well as the color or flavor of your gift on the fly

So what about the element of surprise? "It turns out that a non-trivial percentage of all flower deliveries fail because people aren't expecting it," Linden says. "It's a major problem with flowers." When people are expecting your gift, they're sure not to miss it, but there's also a "second set of excitement with actually receiving the gift," he says. Facebook Gifts come packaged with a printed greeting card and fancy wrapping as if you had delivered it yourself.

The company's betting on great presentation with Gifts, but also with real utility. It is after all the company's second attempt at rallying users behind sending each other goods. Facebook once tried gifts — of the virtual sort — but the effort flopped, presumably because of low demand for gifts (like cupcake graphics) that only exist on Facebook. "It was dipping our toes into things in order to see how people were sharing," a spokesperson said. The company acquired Linden's company Karma back in May, which was already knee-deep in e-commerce and social gifting, to build out its physical gift-giving efforts. And let's not forget, Facebook's now a public company actively seeking out new revenue streams, especially on mobile where it has been traditionally weak. Gifts operates on a profit-sharing agreement between Facebook and each partner, offering Facebook a new way to make money. 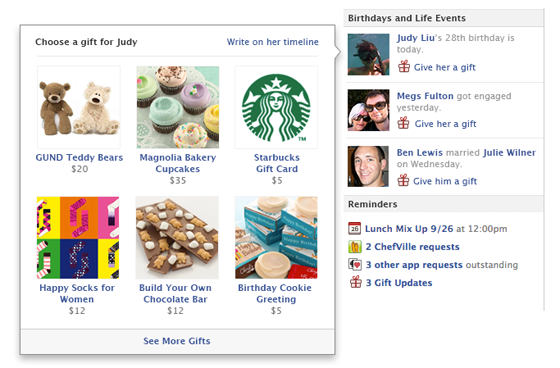 There are two ways to give a gift on Facebook: "Give a Gift" now replaces "Write on Wall" next to the list of friends with birthdays in the top right corner of your news feed. You can also click "Gift" next to "Post" and "Photo" above the text box you see on a friend's wall. By giving the new "Gift" button prime placement, Facebook is clearly stating its hopes for the new feature and revenue stream. The company already knows your friends' birthdays, and is on both your computer and your phone. Facebook won't even charge you when you click "Send" after creating a gift. The bill lands in your inbox later, only once the recipient has digitally "opened" the e-card bearing their gift. At this point you are prompted to enter in credit information or face certain disgust from the gift recipient. "People want to send gifts the moment they think of someone," Linden says, "but you might not always be able to pull out your credit card right then." 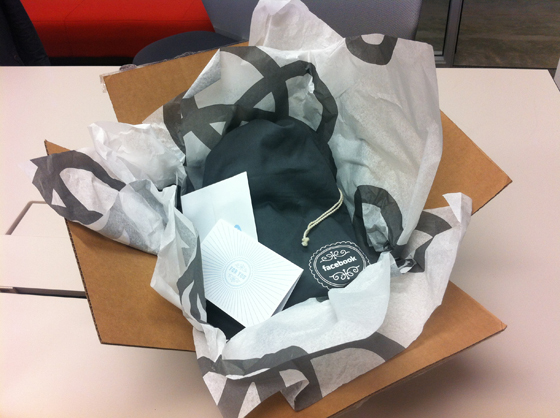 Like everything else on Facebook, your gifts can be made public on the recipient's wall with one click. When you click "Send," the recipient instantly receives a push notification e-card inside the Facebook app on their Android device or iPhone. For now, while both platforms can receive gift notifications, only Android phones can send gifts. Now that Facebook's iOS app has gone native, the app is on a tight release schedule so it won't be able to send gifts until the next update in a few weeks. Gifts begins its roll out today in the US, and eventually in other countries as well.

With Gifts, Facebook seems to be attempting to resurrect the idea of casual gift-giving between friends. By freeing you from worrying about picking the wrong size or asking for an address, the new platform provides a unique draw for both the sender and the recipient. But are people ready to finally purchase things (besides Farmville credits) through Facebook, for all intents and purposes? If it means never receiving an ugly sweater one size too big, we just might be.