Hardware coming next year and will play back master recordings

Neil Young has appeared on the Late Show with David Letterman to promote Pono, a high-quality digital music service that will launch next year. Rolling Stone reports that Pono will be comprised of a music downloads store, a tool that converts digital audio files into analog-sounding recordings, and a series of audio players. Young showed off a prototype Pono player to Letterman, and the design is nothing if not unique — it's a bright yellow triangular prism with a small screen and simple controls. The player will, according to Young, play back Pono master files with "the best sound anyone can get."

'Pono' is Hawaiian for 'righteous'

Young has been increasingly vocal about what he perceives as the poor quality of current digital music offerings, and trademark applications back in April hinted at his plans for Pono. Red Hot Chili Peppers bassist Flea got a first-hand demonstration of the service in Young's car, and told Rolling Stone that "it's not like some vague thing that you need dogs' ears to hear. It's a drastic difference." Warner, Sony, and Universal are reportedly all on board, and while you'll have to re-buy songs if you want to hear them in their high-definition glory, the Pono devices will also play back tracks bought from other digital stores. 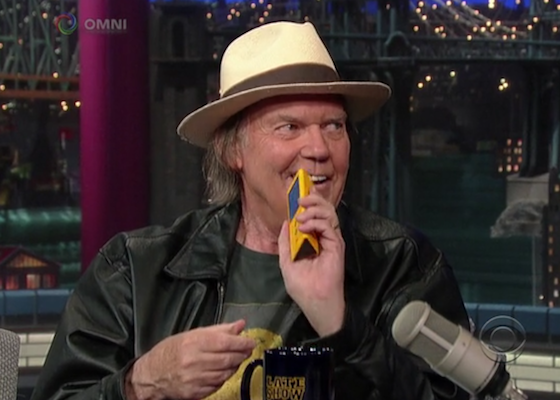