RIM has been promising to launch its new BlackBerry 10 devices at the beginning of next year, but it hasn't officially unveiled what the new devices are or what they will look like. CrackBerry found an apparent internal marketing video for the new phones, revealing what the alleged L- and N-Series phones will look like.

The video, now removed, clearly displayed a slab-style all-touch smartphone (the L-Series), as well as a QWERTY-equipped model (the N-series) that is reminiscent of the Bold 9900 from last year. We have already seen leaks of the L-Series before, but this is the first time that we have gotten a look at the QWERTY model. RIM has already announced that it will launch both all-touch and QWERTY BlackBerry 10 smartphones, so these images line up nicely with its promises. The devices in the video were running what appears to be a final version of BlackBerry 10, but a lot of the imagery also appeared to be faked with image editing software.

Just this week, RIM handed out the Dev Alpha B BlackBerry 10 development device and a beta version of BlackBerry 10 to developers. It is very likely that the Dev Alpha B is the same phone as the L-series device spied in the video, though with a clunkier case surrounding it. Though RIM is being very active in promoting its new platform to developers, it has confirmed numerous times that consumers won't be able to get their hands on it or new devices for it until the first quarter of 2013, so we still have a while to wait. 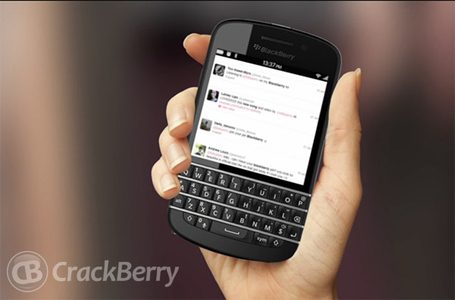 UPDATE: The video has been reuploaded to YouTube and can be seen below.