An ebook reader for the note-taking set

With three sentences, my mom laid out Sony's problem in the ebook reader market. It's not that there aren't good options — the Kobo Touch is a very good device, and Sony has in the past built good ebook readers — but the Kindle and Nook brands are so entrenched and so synoymous with the category that any competitor needs to offer something exceptionally compelling to have a chance.

Sony's latest model, the $129 PRS-T2, is mostly an apples-to-apples competitor with the latest Kindle: it has a six-inch E Ink Pearl touchscreen, is extremely light and thin, and has battery life you'll measure in months instead of hours or days. There are a few new features, though, including one possible game-changer: Evernote integration that lets you sync all your notes, highlights, and bookmarks to your phone or computer. This kind of "active reading" is something no other manufacturer has solved, and it's one of the biggest barriers to leaving print behind. Has Sony torn down that wall, and can it use Evernote to get a foothold in the market? Let's find out.

It's not just my mom: the Reader, Nook, Kindle, Kobo, and most other reading devices are all remarkably similar in their design. The Reader is slightly taller (6.9 inches) than the Kindle, but they feel exactly the same in my hand. A matte black bezel surrounds the 6-inch E Ink Pearl display on my review unit, but the Reader also comes in red and white. The display is sunk far down in the bezel, presumably to make room for the touch technology above it, but it's so far down that it casts a shadow around the edges of the screen, and it feels a bit like you're reaching into an abyss just to swipe to the next page.

The power button and Micro USB charging slot both live on the bottom of the six-ounce Reader. It's the same layout as the Kindle, and in both cases the power button is the bane of my existence. Every time I lie in bed with the device on my stomach or sit with it in my lap, I accidentally turn it off about every third page. I wish the power button were somewhere, anywhere else.

The Reader has five buttons on the front, with icons that look just like Android keys — there's Home, Back, and Menu, all of which are fairly self-explanatory. This is really the only major design change on the new model: the buttons used to be above their corresponding icons, but now icon and button are combined for a much sleeker look. To the left of those three keys are two buttons for flipping pages back and forward. I personally love physical page-turn buttons, but these aren't all that useful — if you want to use them, you have to hold the Reader in your left hand with your palm around the bottom edge. I much prefer the non-touch Kindle and the Nook, both of which have page-turn buttons on either side of the screen, though it's nice that Sony's model has both touch capabilities and physical buttons. I also like that there's an exposed microSD slot, which makes side-loading content easy (it can also be used to augment the 1.35GB of available internal storage). 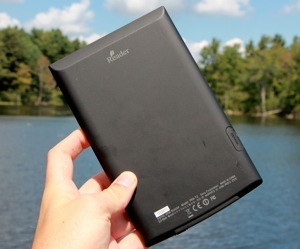 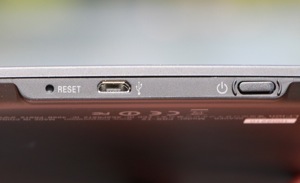 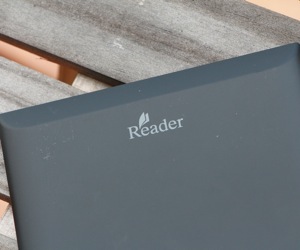 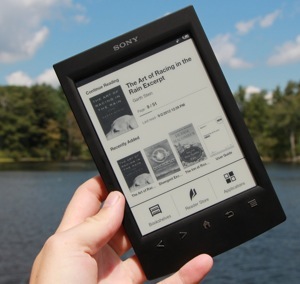 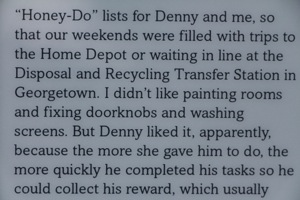 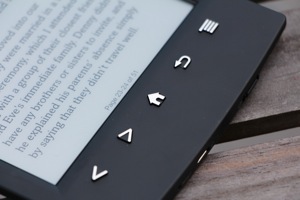 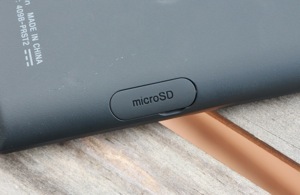 E Ink Pearl has been around since 2010 and has been used on every ebook reader on the planet since that time, so it's pretty much a known quantity. The Reader's screen is, as with all E Ink devices, totally readable outdoors, and text renders as crisply as a physical page. E Ink does require the occasional jarring page flash to clear the screen, but Sony has minimized them: the Reader only flashes every 15th page turn, and slightly more often if you're flipping through images or opening and closing settings menus. The Nook and Kindle both flash more frequently, and there's definitely a bit of ghosting on the Reader's pages as you get to the 12th or 13th post-flash page, but it never really hurts the reading experience.

The Reader is fast and responsive, and every press or tap registered properly. It can lag a bit, simply because E Ink isn't the fastest display technology out there, but as long as you turn pages at a reasonable pace, it keeps up just fine. The on-screen keyboard would occasionally appear to lag, but everything I'd typed would appear a few seconds later.

One of E Ink's biggest advantages is its low power consumption. The Reader's battery is rated to last two months on a charge with Wi-Fi off, and six weeks with it on — given that the battery hasn't gone down at all since I got it more than a week ago, I believe both figures.

I'm constantly fiddling with the settings on my Kindle, trying to get text to look exactly like I want it to. Using the Reader, I missed being able to set margins and line-height, but I loved how many more fonts were available. I also much prefer Sony's default font, which is thin, well-spaced, and attractive. You get eight font-size options, which range from almost unreadably small to ludicrously large — I settled on the fourth-smallest size.

The Reader's home screen shows what you were most recently reading, plus the four things last added to your device. There's also a dock of sorts at the bottom, offering access to "Bookshelves" (your books and periodicals), "Reader Store," and "Applications." Applications covers things like settings, a handwriting app for taking quick finger-drawn notes, and the super-basic built-in browser. The Reader is clearly based on some version of Android, complete with a pulldown offering quick access to settings and any new notifications.

The Reader hooks into Sony's Reader Store, which is getting better and better all the time — Sony's obviously committed to it. There's now a desktop interface for the store, so you can buy books at your computer and send them to your Reader; Reader apps are also available for other platforms, so it's not such a siloed ecosystem anymore. There's a Mac app, a Windows app, and an Android app that's also optimized for tablets — it's not nearly as wide-ranging as Amazon's ecosystem, which covers just about every platform you can name, but it's a solid offering. There's no iOS app, though, which is a huge hole: I do a ton of reading on my iPhone, and not having it synced with the Reader would be killer.

The Store app on the Reader is good, too, making it easy to find and buy books as long as you're connected to Wi-Fi. The Reader Store's selection is as complete as Amazon's or Barnes & Noble's — unless you're really looking for niche and out-of-print content, most stores are going to serve you just fine. Plus, since the Reader also supports ePub and PDF files as well, there's really nothing you can't find. Sony even has an exclusive agreement with the Pottermore store, so you can ready Harry Potter ebooks to your heart's content.

But the best, coolest, most interesting and innovative way to get content on your Reader? Evernote. 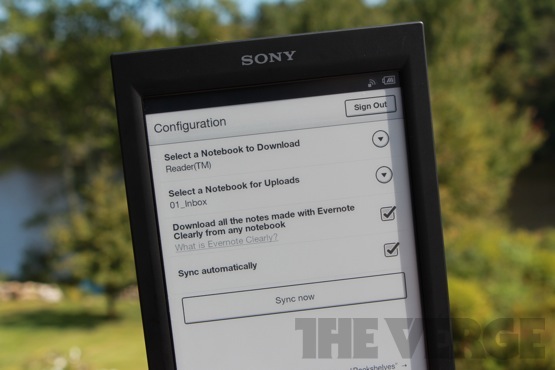 I use Evernote all day, every day — it's where I store everything from notes to article drafts to pictures of my cable bill. It's also the natural place for things like quotes I love from books, or notes I take while reading, and Sony's integration with Evernote allows just such a connection. Once you set up your Evernote account on your device — log in to Evernote, then select a notebook to send notes and highlights to and another to download notes from — you can easily get everything off your Reader and into Evernote. You can also send content in reverse, using the Instapaper-like Evernote Clearly. Clearly is a browser extension that strips all the clutter off a page, and makes it easy to share the more readable version or save it to Evernote without any clutter. If you've connected Evernote to your Reader, every time you use Clearly to save a note (or create a note in the notebook you've selected), it syncs to your Reader for reading later.

Every feature I want is present, but the implementation is clunky. You can't just highlight something and have it go automatically to Evernote — you have to manually send it to Evernote each and every time. Likewise, Evernote notes are stored in their own "bookshelf" on the Reader, and it's a half-dozen taps to switch back and forth. You also have to manually sync, a problem with the Nook as well — the Kindle's wonderfully magical quality is that things just appear on your device as soon as you buy them, but the Reader requires a lot more attention. I certainly applaud Sony for realizing how useful it could be to send articles to your Reader and notes to your Evernote, but the feature feels clumsily stuck on rather than seamlessly integrated.

Facebook sharing is also new to the Reader, but it's just for sharing quotes or your reading progress with friends. Nifty if you're in a book club, otherwise probably annoying for all your friends. 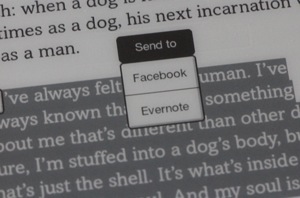 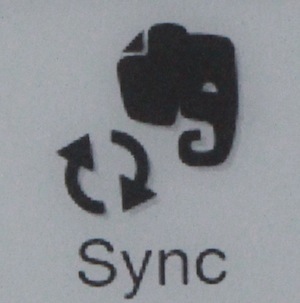 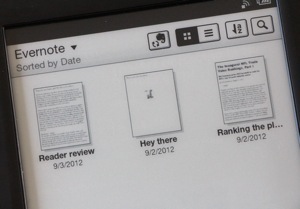 The Reader PRS-T2 is Sony's best model yet, by far — it's faster and more responsive than ever, and added some genuinely great features to the mix as well. Sony's ecosystem is also becoming more compelling, as the company's phones and tablets get better — though the missing iOS app is a huge hole. Evernote integration sets my heart aflutter, but as useful as it is it doesn't feel quite finished.

Next to last year's Kindle and Nook, it might be a competitive third ebook reader option for $129. Unfortunately it's 2012, and Sony's Reader comes to market already behind. Barnes & Noble added a glowing backlight to the latest Nook, a fantastic addition that makes reading in bed or in the dark possible without any extra eye strain. All indications are that this week, Amazon will announce a new Kindle with an entirely new Paperwhite display technology, plus a backlight similar to the Nook's. It feels like Sony's a full generation behind: last year Amazon and Barnes & Noble both introduced very good E Ink Pearl readers, and have since added and evolved on top of them; Sony's latest Reader just hasn't kept up.

No matter what you do, wait and see what Amazon does this week. But even as Sony's given me hope it can someday be the Evernote companion I've always wanted, for now it's given me no reason to steer anyone away from a Kindle or a Nook. When you factor in the fact that the cheapest Kindle is all of $79, the choice becomes a no-brainer.