A couple of images have leaked out suggesting that T-Mobile Germany is receiving nano-SIMs in preparation for the iPhone 5's launch.

We've already been hearing reports that European carriers were — somewhat surprisingly — "stockpiling" newly-approved 4FF nano-SIM cards in preparation for the next iPhone, and now a couple of different images picturing what appears to be T-Mobile Germany's cards have made their way online. According to German site iFun, which received one of the pictures, a cover letter included with the packages of SIM cards being sent out says that the cards are for upcoming smartphones and are not to be distributed yet. Of course, none of this is conclusive, but with a few different sources reporting this we wouldn't be wholly surprised if Apple's next phone does use the new standard — even if that does mean it bet on its nano-SIM standard before it was approved by the ETSI.

Update: BestBoyZ has just published multiple shots of the T-Mobile packaging with its nano-SIM card. Thanks, anonymous! 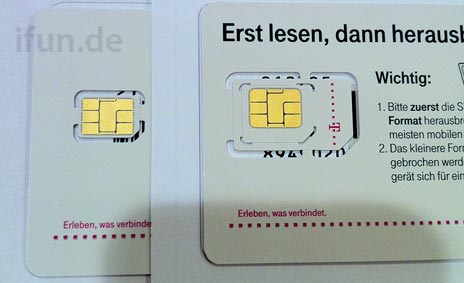