Nokia confirms wireless charging support for the Lumia 820 and 920.

As expected, Nokia has confirmed that its new Lumia 920 and 820 Windows Phone 8 handsets will support wireless charging. The company will make its own charging accessories available, including a standard plate, a JBL speaker dock, and a Fatboy-branded pillow-style unit. As well as charging the 920, the JBL speaker dock will use NFC to automatically start playing music from the phone once it's placed on top. This NFC functionality also features in the previously leaked Monster Purity Pro headphones. 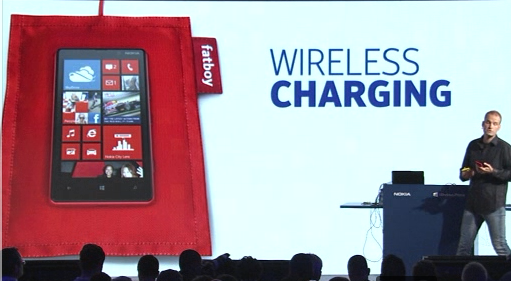 The phones are compatible with the Qi standard, meaning that there may well be more public places to charge in future, as well as a wide range of available mats. Unlike many Qi-compatible handsets from Verizon, the 920 won't require a special battery cover, with the technology built right into the handset. The 820, however, will need to have both wireless charging and NFC functionality added via its exchangeable covers. Nokia will also be installing Qi charging pads in a Virgin Atlantic lounge in London's Heathrow Airport (and later New York's JFK), as well as at Coffee Bean and Tea Leaf cafes in "select major metropolitan cities".

More from this stream From Touchstone to flashpoint: the wireless charging standards war