Film review: 'Looper' reinvents the sci-fi film with a mix of humanity and adventure

Share All sharing options for: Film review: 'Looper' reinvents the sci-fi film with a mix of humanity and adventure

Time-travel movies traffic in upended expectations. From The Terminator's Michael Biehn fathering John Connor, to Shane Carruth and David Sullivan's schemes in Primer, a huge part of the fun of bending the space-time continuum is watching characters discover the unexpected consequences of their actions. Rian Johnson's inventive sci-fi drama Looper is an entrant in that same tradition — but the group that may be most surprised is the audience itself.

If you've seen the trailer, you know the gist. Joseph Gordon-Levitt plays Joe, a hitman in the year 2044 known as a "looper." Loopers perform one very specific task: killing targets sent back in time by the mob of the 2070s. Joe and his assassin brethren live a high-end lifestyle in a world that's clearly seen the other side of prosperity, but they have a known endgame. At some point, they'll likely be sent their older selves to dispose of — "closing the loop" in the movie's parlance — and one day, it's Joe's turn to face the man he's going to become (Bruce Willis).

That's the stage writer / director Rian Johnson sets, and when things invariably go wrong Joe is left scrambling to track down his older counterpart and finish the job, lest his employers catch up and take care of him instead. The film delivers on its hooky premise exactly as you'd hope, as Willis and Gordon-Levitt engage in a cat-and-mouse of stylish action sequences, and Johnson takes full advantage of his time-travel premise. (One particular sequence, when Joe looks for a way to send a message to his future self, involves cutting, a scar that instantly appears, and a bit of blood).

That's when Looper flips on its head, however. As Joe finds out, Willis wasn't sent back in time against his own will after all. He came back for a very specific — and very dark — mission that challenges not just your expectations, but the way you see the Die Hard star as well. To give anything more away would be to ruin the film's best surprises, but suffice it to say that Looper is a movie where nobody ends up where you expect (or hope), but what a pleasure it is to be surprised in a movie theatre again.

While the future Looper portrays isn't a dramatic departure from our own time, the world is cleverly built up with subtle visual and dialogue cues. Blue LED light switches in Joe's apartment and the stylized vehicles let us know when we are without getting in the way, while the dialogue is peppered with references that lock us into place. Gat Men, blunderbuss, The Rainmaker; like Blade Runner (and Brick) before it, Looper's idiosyncratic dialogue sets a noir tone and never lets go.

The dialogue sets the tone and never lets go

Of course, all of the stylistic flourishes mean nothing without performances to support them, and to that end Willis, Gordon-Levitt, and Emily Blunt — as a single mother protecting her son — provide the beating heart of the film. Gordon-Levitt underwent extensive prosthetic work to bring his profile in line with Willis, and to the make-up team's credit the changes to his face drop out of mind by the third shot. Save for a jarring moment midway through the film the change is otherwise seamless. Gordon-Levitt adopts the older actor's smirk to great effect, and when the two end up facing off at a diner the likeness is uncanny.

Gordon-Levitt's Joe is a man without focus or direction; a drug user that lives his life from one target to the next. His transformation from a man of pure self-interest, to one that has the courage to believe in something a little more noble, is impressive on every level — and a triumph of the actor's own impressive skills and the synchronicity he has with Johnson as a filmmaker 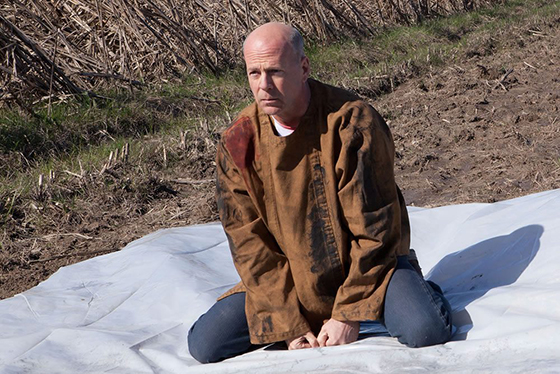 Willis as well provides some of his most inspired work in recent years. There's a vulnerability and heartache here that he hasn't really shown off since 12 Monkeys. It leads his character to make some decisions with monstrous consequences, but we never lose sight of — or fall out of sympathy with — the emotional drive pushing him forward. The Joe of the future is a romantic of all things, and doesn't intend to let anything step in his way.

That said, there are some that will no doubt be disappointed that Looper isn't a full-bore action-fest from top to bottom. This isn't Transformers — hell, it's not even Source Code. Instead, Looper is a balancing act of high-concept sci-fi spectacle, unexpected romanticism, and inspired character work. When I spoke with Johnson earlier this year, he said he hoped to move into the world of Hollywood studio filmmaking, citing the ability to reach larger audiences with his own brand of cinema. If the execution of Looper is any indication, he'll soon have his chance.

Looper opens nationwide in the US on September 28th.

[Full disclosure: Bryan Bishop and Mr. Johnson attended college together, a topic we discuss in our interview with the director.]