Nokia appears to have faked still photos in its PureView OIS camera demonstration.

Nokia's already apologized for faking a video demonstration of the PureView OIS (optical image stabilization) technology in its new Lumia 920 smartphone, but that apology may not go far enough. In the second half of that same video, Nokia showed off sample still images allegedly taken using PureView, and it appears that those were faked as well. See the picture above? Photographer Johannes Grönvall took that shot in downtown Helsinki, Finland, and it appears to depict the very same model in the same clothing, only this time there's professional lighting, a tripod and what appears to be a large camera lens in the shot. 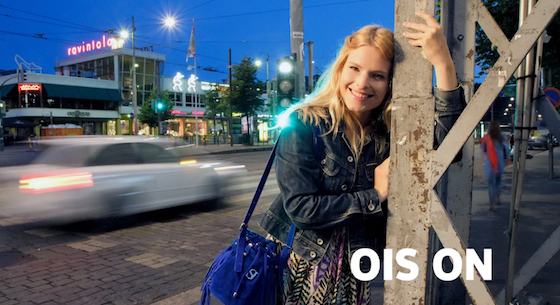 That wouldn't be damning by itself: because Nokia's video demonstration includes some footage of a young man taking photos of that model with his Lumia phone, there obviously had to be someone filming that young man as well. Sure, the model seems to be facing that camera lens, but perhaps that was a fluke, and perhaps later they pulled out a real Lumia 920 to take the photographs we saw. However, Youssef Sarhan, who claims to be a former resident of Helsinki, alleges that the powerful way the model is lit in these photographs would have been impossible with the pre-existing lights in that town. What's more, the way the street lights diffract (see those pointy stars?) requires something to be in the way — something like the blades of a DSLR lens at a tiny aperture, not a Lumia 920 at f/2.0. Here's where this picture was shot, in case you're interested in checking out the city's light fixtures for yourself:

"So what?" you might ask. Nokia already admitted to faking the video, and in any event, the PureView OIS technology does actually work to some degree. It's not nearly as impressive as the faked demo, but it does have a real and quite positive effect from what we've seen. The problem is that while representatives do say that the original OIS video demonstration was faked, they've narrowly tailored their statement to talk about that video and not these stills. Because the video shows that young man holding up actual Lumia phone and then showing these "results," (go to 0:49 in the video below) the net effect is still quite misleading, particularly to anyone who sees the video out of context. Perhaps the company should retire this video once and for all, before any more damage is done.

For now, if you want to see what the Nokia 920's camera can really do, the company insists that every image at the PureView website was taken with an actual prototype handset.

Update: John Pope, a director of communications at Nokia, admits that the still images from the original OIS video were not shot with the Lumia 920 smartphone. In fact, they're not actually individual pictures at all, but rather stills that were extracted from the misleading OIS video that the company already apologized for. Pope says that the company regrets the error and that subsequent images were taken with prototype phones themselves, and in particular that the images from the Central Park shoot in New York were done with no artificial lighting of any sort. Here's Nokia's comment in full:

For clarification, the first photo was shot by a bystander in Helsinki and apparently posted by them to the Internet. It shows the production set-up being used for the video for which we have apologized for not being transparent. Indeed, a Lumia 920 was not used to illustrate the benefits of optical image stabilization and we regret the error. The other still images in this post were extracted from that video. Again, we have posted an apology and the video is now clearly marked. We also posted images of the Lumia 920 being used in low light conditions yesterday. These images were taken in Central Park, the evening prior to our launch in New York, using a Lumia 920 prototype and no artificial lighting or stands, and a flagship smartphone from another manufacturer. Their authenticity is not in question. The same is true for the PureView photos on Nokia’s product pages.