Kindle Fire HD 8.9: how the new Kindle tablet compares with the competition

Kindle Fire HD 8.9: how the new Kindle tablet compares with the competition

Amazon stepped up its presence in the tablet market today with the introduction of Kindle Fire HD, an 8.9-inch tablet squarely aimed at high-end competition from Apple, Samsung, and other manufacturers. We've compared the device with a number of other tablets.

Amazon stepped up its presence in the tablet market today with the introduction of Kindle Fire HD, an 8.9-inch tablet squarely aimed at high-end competition from Apple, Samsung, and other manufacturers. CEO Jeff Bezos touted a number of the device's features on stage, such as its 1920x1200 display. That translates to a pixel density of 254ppi, which nearly matches Apple's class-leading Retina display on the new iPad. That resolution is also good enough to surpass many other other recent entrants in the tablet space, including the Galaxy Note 10.1, Asus' Transformer Pad, and the upcoming Microsoft Surface with Windows RT. 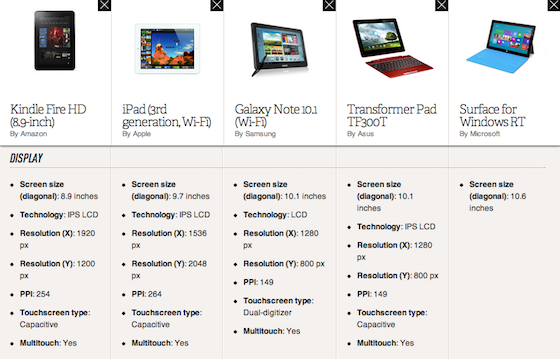 In terms of processing power, Bezos claims the TI OMAP4470 utilized by the Kindle Fire HD outperforms Nvidia's Tegra 3 chipset, which has proven to be a favorite among companies producing Android hardware. We'll obviously have a better sense of how accurate that is once the Fire HD is available and can be placed head-to-head against its rivals. What about other hardware? Amazon has chosen to load the device with 1GB of RAM, which matches the iPad but not the plentiful two gigs of memory offered by the Galaxy Note 10.1. Even so, the included allotment should be sufficient for most everyone buying the tablet.

Unfortunately we can't say the same for storage. Depending on the amount of content you'll be syncing with the Kindle Fire HD, you could hit its 16GB ceiling rather quickly. Thankfully you can choose a 32GB Wi-Fi model for an extra $69, or jump up to the top tier 64GB + 4G SKU priced at $599 — though that would mean paying extra for cellular networking you may have no use for. It seems Amazon is betting most consumers will be relying on its cloud services for their music, video, and ebook needs. The addition of 4G LTE networking might help out in that regard, but you'll need to lean on Wi-Fi heavily if you're opting for the paltry 250MB monthly limit included in Amazon's annual $50 data plan.

It's $200 cheaper than the third-gen iPad

Perhaps the biggest factor here is price, however, and Amazon seems to check all the right boxes. At $299, the company crucially undercuts both the iPad 2 ($399) and the $499 base cost for Apple's third-generation iPad. That alone could decide how Amazon's new flagship tablet fares in a crowded market. For the whole story on how the Kindle Fire HD squares up against its competition, check out the detailed comparisons with full tech specs below.