The Kindle Fire launch signals a new phase in Amazon's evolution as a company, fusing its futures in both tech and retail. Amazon wants to prove that like Apple, it's a serious, innovative technology company.

Share All sharing options for: Amazon to Apple: the game starts now

The key moment in Jeff Bezos's keynote announcing Amazon's new Paperwhite Kindle and Kindle Fire models came before he introduced any of the new hardware. "People don't want gadgets any more," Bezos declared, explaining why the Kindle Fire had succeeded where other gadgety Android tablets had failed. "They want services that improve over time. They want services that improve every day, every week, and every month." This statement of purpose signals a new phase in Amazon's evolution as a company, and its singular, emerging take on the developing consumer marketplace, and how it's positioning itself towards its broad field of competitors.

"The Kindle Fire," he added, "is a service. It offers 22 million items. It calls you by name. It makes recommendations for you." Bezos was talking about the Kindle Fire as if it were Amazon itself: the entire retail and technological experience made manifest in a single device. The future of Amazon, he seemed to be saying, isn't the website; it's this material portal, and others like it.

It's a truism that computing today is driven by increasingly portable hardware backed up by cloud services and subscriptions, that the fun play of digital media is displacing software suites driven by text-based productivity, that subscriptions and proprietary stores are just as legitimate as pure hardware plays. But nobody distills that transformation to its purest essence quite like Amazon.

While Apple, Microsoft, Google, and Facebook are all charting different evolutionary routes from PC to post-PC and from desktop to mobile, Amazon has largely been able to sidestep that entire problem. It's borrowed what it's needed to from all of its competitors — whether spiritually in the case of Apple's iTunes, or materially in the case of Google's Android — and moved on. While the iPad is still trying to prove itself in the face of criticisms that it's only a media consumption device, a portable store in a fancy box, Amazon's simply embraced that fate and never pretended otherwise.

"We want to make money when people use our devices, not when they buy our devices," said Bezos. The Kindle Fire isn't a gadget, but a store. It's also the greatest store in human history.

From the beginning of the presentation, Bezos practically doused other Android tablets in gasoline and lit a match. Not only are they too gadgety and haven't sold, but Amazon just outcompetes them on price and services.

The Nexus 7 is the only Android-powered device Bezos was willing to put next to the new Kindle Fire tablets, at least in price and spec charts that favor the Fire. This makes sense; the Nexus is a serious machine that matched or beat the original Fire on specs and price. Still, it arrived several months after the first generation Fire, and now Amazon's upped the ante for $199 tablets again.

Amazon won't even talk about other tablets as real competitors

As for other OEMs, Bezos wouldn't even mention them by name. Even devices that ostensibly compete with Amazon as readers' tablets like Nook and Kobo didn't warrant a mention, even if the Fire's new family-friendly features like multiple account support seem directly competitive with the Nook. Nor did Bezos bother to say what version of Android the Fire's new software was based on, or even the new Fire was running Android at all — you could have walked away from the presentation thinking Amazon had developed a custom operating system all its own. Even a brief hands-on with the new Fire models just reinforces how far Amazon's pushed Android into the background.

Rightly or wrongly, Bezos doesn't consider Android OEMs and their devices to be serious competitors. Amazon is playing a different game, and setting its sights on bigger prey. 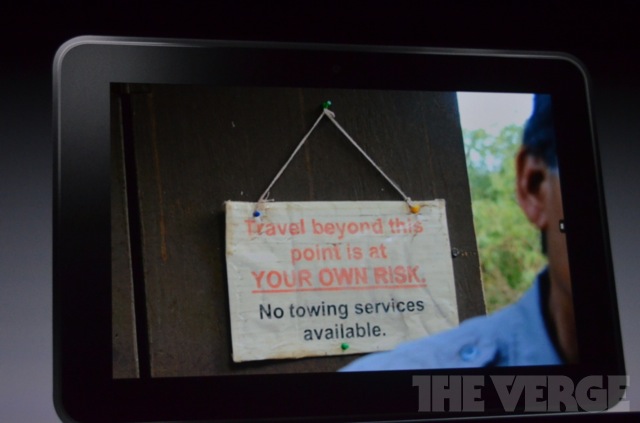 First and foremost, that means Apple: the biggest company in tech, the dominant player in the tablet and media player space, and probably Amazon's only competitor that can boast similar clout in retail and media sales. Make no mistake: when Amazon titles its Kindle Fire press release "Amazon Takes on the High-End," it's Apple that's being called out.

Amazon's challenge to Apple is both direct and indirect. First, Amazon wants to prove that like Apple, it's a serious, innovative technology company. This is why, even as Bezos disdained "gadgets," he was also willing to take a long detour through the minutiae of MIMO Wi-Fi technology already common on laptops and routers sold today.

All this jabbering about Wi-Fi is just Amazon shouting, "we're a real hardware company too"

This whole pedantic performance was Bezos underlining repeatedly: We're not booksellers dabbling in hardware. We're inventors. We're pioneers. We demand to be taken seriously. If this also lets Amazon throw up a chart showing that it has at least one technical feature that Apple's iPad and Google's Nexus 7 don't, so much the better.

At the same time, Amazon gets to have it both ways, touting hardware not for its own sake, but as a "critical," "essential" part of the Kindle Fire HD "service." Improved Wi-Fi just happens to let you stream higher-definition movies without lag or buffering; Dolby stereo sound makes video and games a more immersive experience.

Amazon must be desperately hoping that the Kindle Fire HD's technical promises actually pay off, unlike last year's similarly-touted cloud-accelerated Silk web browser, which failed to deliver on those promises. (No word at all about Silk in this year's event.) Still, it serves the same purpose: proving Amazon's high-tech bona fides, and positioning the company and its products closer in consumers' minds to Apple's.

Everywhere else, Amazon's head-to-head comparisons with Apple are less direct. Amazon didn't make a 9.7-inch tablet with a 4:3 screen ratio; it made an 8.9-inch tablet with a 16:10 ratio. It may seem like a subtle difference, but the large Kindle Fire HD won't really look and feel like an iPad; it'll look like an oversized Kindle Fire. It's big enough for games and movies, but not anywhere near personal computer territory.

Ultimately, Amazon's strategy here is to avoid engaging with Apple on Apple's terms. If or when Apple launches an iPad Mini, it may blow Amazon's devices away — but at least it will be on ground that Amazon, not Apple, helped to create. Still, you can imagine Apple's marketing team preparing for another round of ads already: if it isn't an iPad… it isn't an iPad.

Reducing the cost of 4G data access to just $50 for the first year is another fascinating asymmetric challenge to Apple. Sure, you'll have to sign up for a regular data plan after the first year, and 250MB of wireless data is awfully paltry for road warriors, but a 4G LTE-enabled iPad suddenly looks very expensive on the shelf, while a maxed-out Kindle Fire HD looks like a bargain. Amazon is shrewdly appealing to its customers as customers, asking them to comparison-shop Apple out of the picture. 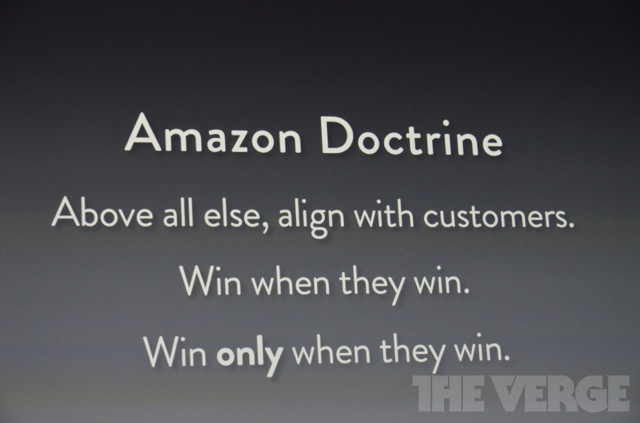 This focus on retail as the primary revenue stream is the flip side of what Bezos now calls "the Amazon doctrine": aligning the company's incentives with the needs of its customers, and "winning only when they win." If Amazon's customers are happy with the Kindle Fire's still-growing media offerings and advertisements for its giant retail catalog, Amazon wins. If its customers sour on that future, Amazon loses. Everything, from Amazon's hardware choices to its price points and messaging, flows from that concept.

"We want to make money when people use our devices, not when they buy our devices."

The Kindle Fire HD is a device built for the future of consumption, not computing. The only way Amazon can succeed is if it does so on Amazon's terms: winning the long game of low price points and high total retail sales. It's a throw of the dice, but Amazon is uniquely positioned to make that bet.

Yesterday, Bezos was almost reverent about Amazon's products "aligning" with the needs of the customer. "If someone buys one of our devices and puts it in a desk drawer and never uses it, we don't deserve to make any money." But it's not about making things. It's barely about communicating. It's a device that was built to buy. Amazon is the world's largest store, and with the Kindle Fire HD, Jeff Bezos invites customers to never, ever leave that store.