Even without audiobooks, the Kindle Paperwhite can still beat the competition

The new Kindle Paperwhite lacks the audio features of prior Kindle e-readers, but it doesn't need them to beat the competition.

Share All sharing options for: Even without audiobooks, the Kindle Paperwhite can still beat the competition

Hidden by all of the improvements that Jeff Bezos extolled on stage yesterday about the new Kindle Paperwhite, Amazon has silently taken some features to the chopping block. The Kindle Paperwhite replaces the Kindle Touch before it, but it has lost the 3.5mm headphone jack and speakers of its predecessor. Clearly, without that hardware, the new Kindle e-reader is devoid of audio features — Amazon's once-highlighted "Read to Me" text-to-speech feature is gone, as is access to Audible's massive collection of audiobooks and the sometimes-useful MP3 playback option on the old Kindle. The Kindle Paperwhite solely consumes text, and its 2GB of onboard storage compared to its predecessor's 4GB makes that abundantly clear.

The Paperwhite is a text-only device

These features were once differentiators for Amazon in the e-reader space, but now that they're gone how does the Kindle Paperwhite compare with the competition? Since none of the leaders — the Nook Simple Touch with Glowlight, Sony Reader PRS-T2, or Kobo Mini — have audio features, the Kindle now has one less selling point. Still, Amazon looks like it's won again when it comes to the most important features: screen and ecosystem. At this point in the e-reader war hardware is fairly standard across the board — all now have 2GB of storage (though only the Kindle and Kobo Mini aren't expandable), and processors, dimensions, and build quality don't separate these devices.

While it's not clear why Amazon has seen fit to remove audio features that made its e-reader stand out — perhaps it's looking to push multimedia users to the Kindle Fire family — there's no reason to believe this loss will alter Amazon's position in the e-reader space. That's no consolation to those who have heavily invested into Audible audiobooks, but ultimately, the features Amazon has added seem more important than the ones it has removed. 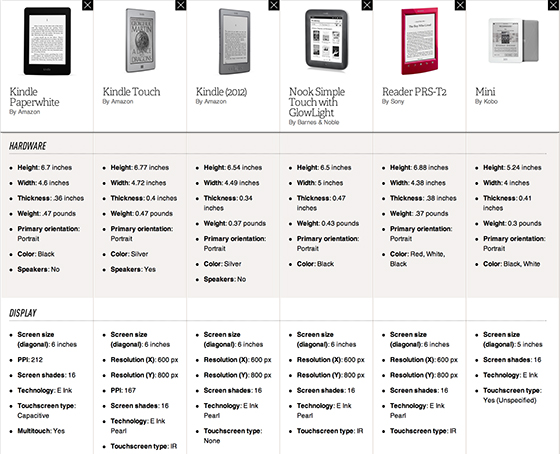