Share All sharing options for: Architects propose a floating airport for London

Architectural firm Gensler is proposing the construction of a floating airport on the surface of London's River Thames Estuary. Dubbed the London Britannia Airport, its concourse would sit in the center of the Thames Estuary, surrounded by runways that float, and tethered to the seabed. The primary access route would be a new high-speed underground railway offering direct links to London and Europe. It's a hugely ambitious project with an estimated cost of £50 billion (around $80 billion). Floating airports and runways have been proposed in the past across the world, but few have made it past the planning phase, and those that did have since been dismantled.

Gensler's concept isn't the first for a Thames Estuary Airport, but it's certainly the best looking. There have been multiple proposals dating back to the 1940s, and just last year a man-made island close to the mouth of the River Thames was suggested as the answer to London's air congestion. Plans to expand London's largest airport, Heathrow, have been vigorously opposed by local residents and are the source of constant political debate. Gensler's proposal includes turning Heathrow into an eco-village, with the excess traffic being diverted to the four runways at Britannia Airport. 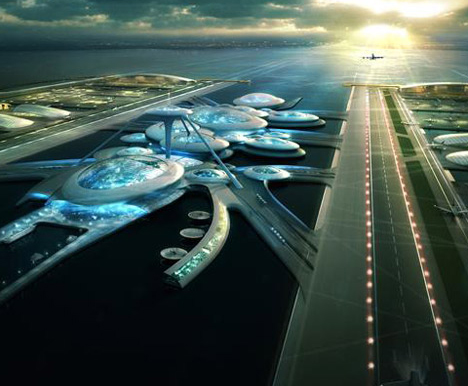