A Russian contest to honor the memory of Steve Jobs has resulted in a fairly unusual monument being erected in St. Petersburg. The Daily Mail and RIA Novosti report that the St. Petersburg National Research University of Information Technologies, Mechanics, and Optics will play host to a six-foot-tall iPhone 4, with a video screen that will play highlights from Jobs' life and quotes from his speeches. A QR code on the back will point viewers to a Jobs memorial site, a risky move for anyone building for the ages. 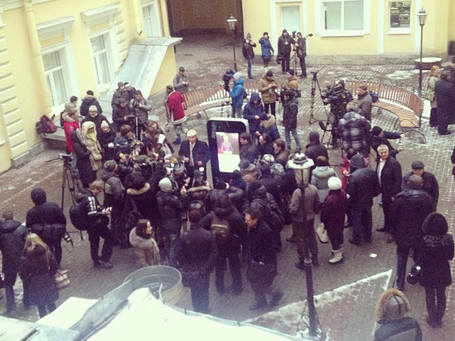 Judging by the photos we've seen, the memorial is a fairly stylized depiction of an iPhone, with a thick bezel. It was the winner of a contest held by the "Progress Fund" in mid-2012, beating out a number of Apple logo-based designs. Besides commemorating Jobs, the monument is meant to draw attention to St. Petersburg's technology industry, according to the Russia Now TV video below. Oddly, the design that was listed as winning the contest there bears little resemblance to the final version, though either is probably preferable to a proposed giant Jobsian face rising out of the ground.