Trent Wolbe will be publishing daily photo essays from CES. This is the latest in the series.

For two years in high school I was a cashier at Whole Foods. We were at a busy intersection right in the middle of three fancy prep schools, so we maintained a pretty steady flow of soccer moms doing wheatgrass shots or going really hard at the salad bar with each other all day long. My supervisor, the Front End Team Leader Eric, was one of those smart middle-aged Whole Foods dudes who seemed like he could be doing much more but had gotten fucked over in life somehow and was now a powerful combination of grateful that he had any job at all and murderously spiteful that he had to wear an apron to work every day. He taught me a lot of lessons, from the practical (where to find the just-expired burritos before they went to the landfill) to the subtly profound. During the lulls in traffic when his team was prone to long bathroom breaks and back-alley bonghits, he’d saunter, clipboard in hand, down the row of cashiers. He’d stop right at the end of your station, lean in, and look you in the eyes. “If you’re not busy,” he’d say in a low rumble, a half-evil grin twisting up into his face, “look busy.” Then he’d slowly moonwalk towards the door, keeping his eyes locked, clicking his pen like a mental patient, until he got outside, where he’d do a spin and casually collect all the misplaced shopping carts in the parking lot. Fuckin’ Eric, man. I wonder if he’s on facebook.

There is no better place for a corporation to look busy than at CES. Executives have to face their current and future investors directly, looking them in the eyes and showing them how the company is creating a future that everyone will want to buy. One of the splashiest ways they can do this is by throwing a gigantic party. 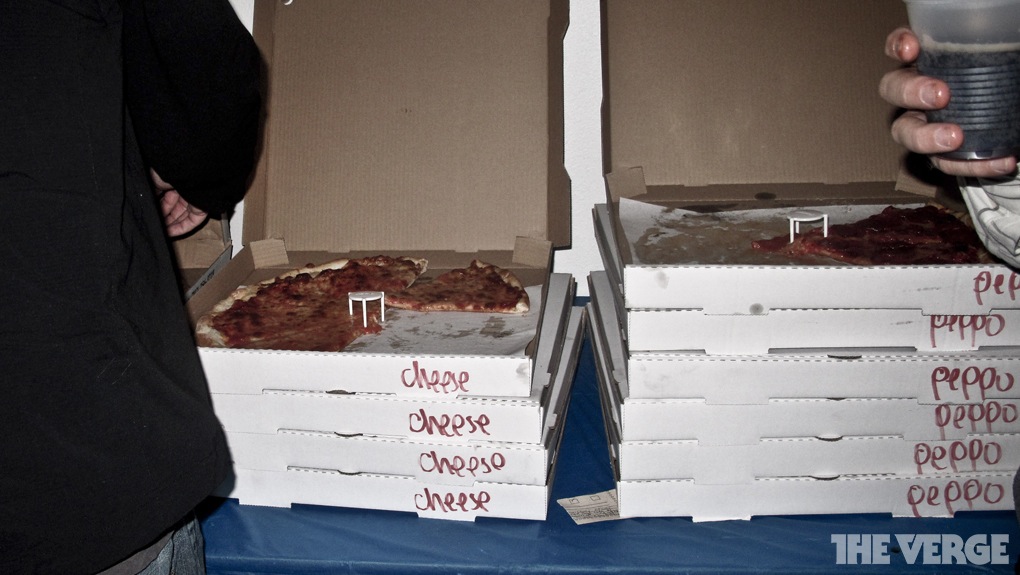 I went to two of them last night and I don’t think Jah himself could’ve provided me with a more illustrative pair of lenses through which I could view the current extremes of consumerism. The night began at the Pinball Hall Of Fame, where MakerBot was doing its version of the CES party song and dance. Located across from a seedy massage parlor in a nondescript strip mall miles away from the big casinos, the Hall Of Fame is one of my favorite places in Vegas. 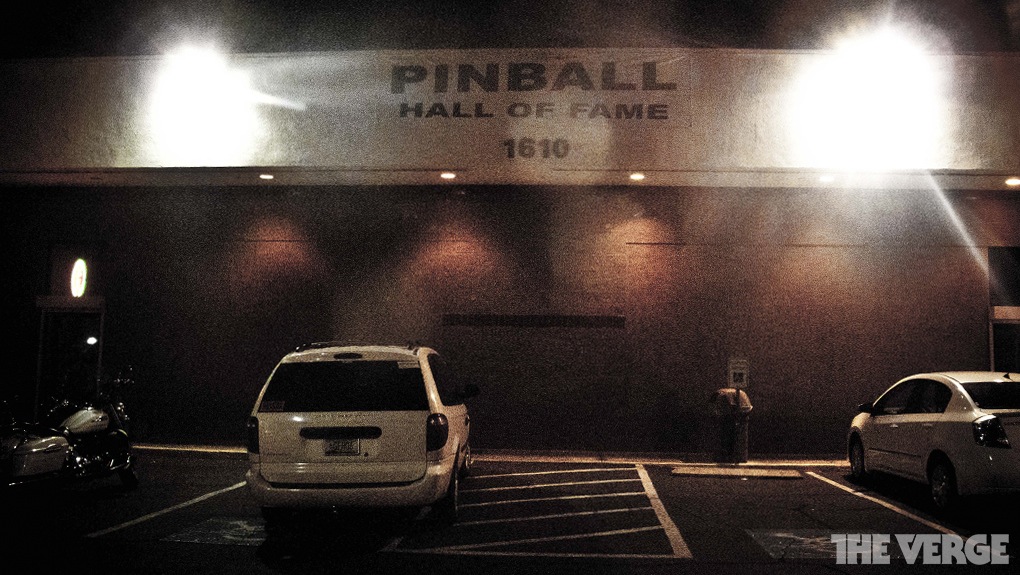 I had had to RSVP for the event but when I got to the front door there was no PR lady checking IDs at a desk: instead there were a bunch of dudes snarfing pizza from a stack of about a hundred boxes of pie and pouring themselves plastic cups of Dogfish Head Ale and Blue Moon from Keg World. On another table sat the party’s killer app, a disheveled pile of $5 rolls of quarters that attendees were free to grab and start feeding recklessly into artisanally-restored treasures like Orbitor 1, Q-Bert’s Quest, and my own personal obsession, an insane electro-mechanical work of art from 1971 called Road Runner. 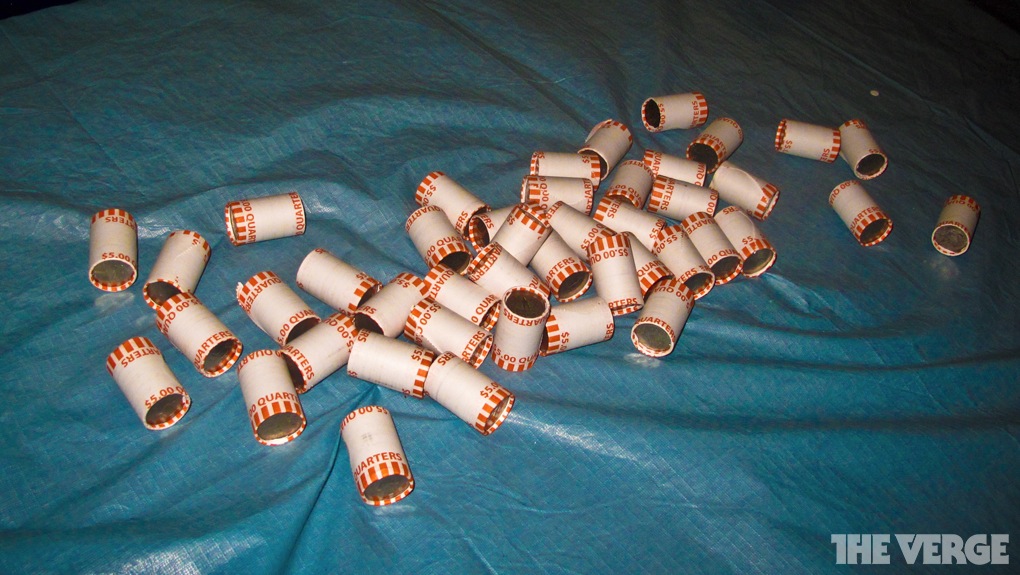 Your car, represented by a crude holographic projection, is placed amongst other cars that move at various speed on three “lanes”: real revolving conveyor belts that move faster or slower depending on how far you depress the gas pedal. An analog score meter clicks away as you speed along the mini freeway, only stopping if you crash. For half an hour I stood transfixed, burning through my stack of quarters and attaining a new personal best of 453 points. 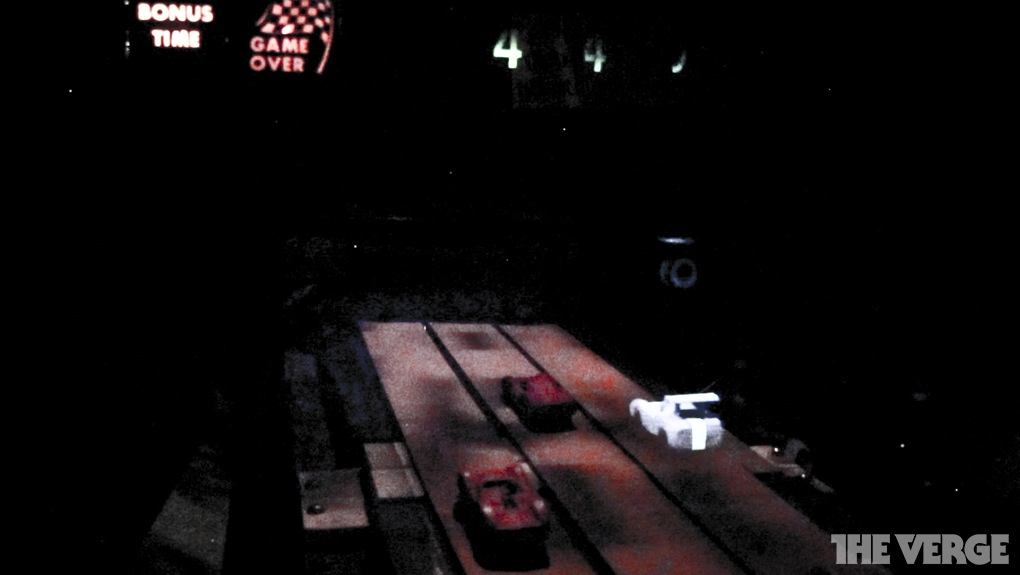 It’s hard to do it justice in a photo. Just go play it yourself.

You know how it is when you get in the zone, right? My palms were sweaty from gripping the steering wheel and I had a vicious snarl on my face, alternately cursing and cheering at myself and the little cars. I heard a voice from over my right shoulder: “This game is AWESOME, huh?” “Yeah, I could fuckin’ play this shit for days,” I said with a maniacal cackle. Distracted, I crashed and turned away from the game, finding the amused and slightly disgusted face of MakerBot founder Bre Pettis. “You wanna play?” I panted in a half-serious huff. He declined graciously and disappeared into a crowd of admirers, leaving me to finish my roll of quarters on a slightly awkward note. Thanks for the party though, Bre, that was awesome. 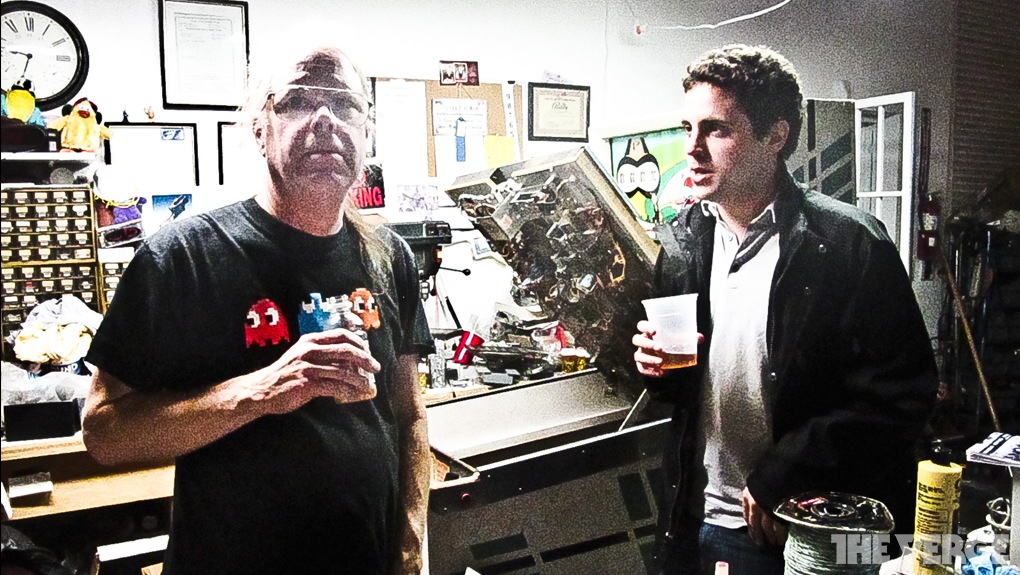 An hour later a taxi dropped me off in the middle of a very different scene: Clear Channel’s “iHeartRadio Live” party at the Aria hotel’s Haze nightclub, a quintessentially douchey hotspot finely-tuned to empty the wallets of the biggest assbags in Las Vegas. 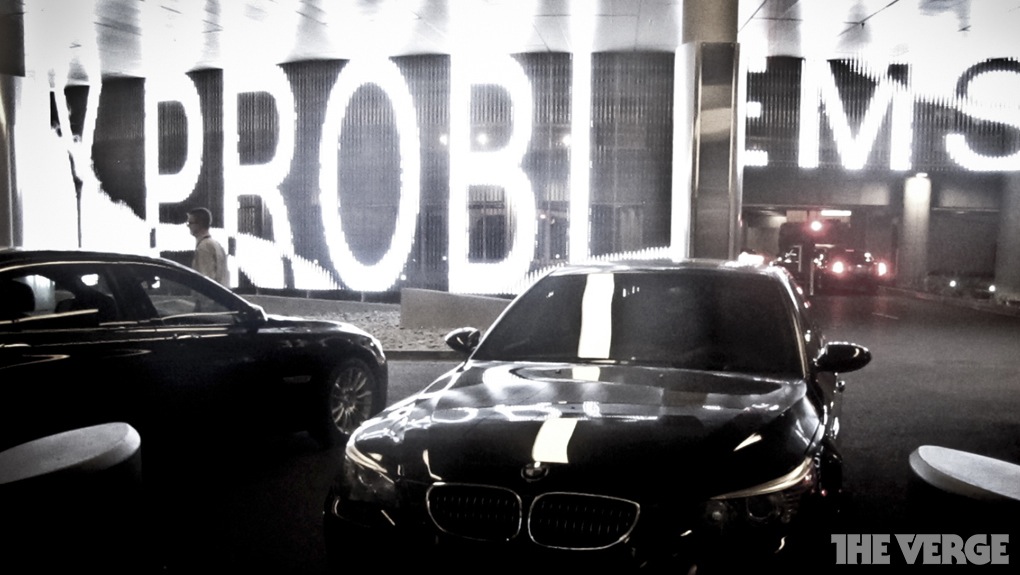 Fast cars and Jenny Holzer rips at the Aria valet, compare to parking lot at Pinball establishment above

There is probably no company that needs to look busier right now than Clear Channel Communications. The vile radio empire, which swallowed up a good chunk of independently-operated stations in the ‘80s and ‘90s before an antitrust case stopped it in its tracks, developed the iHeartRadio brand in response to, you know, Napster and stuff. It’s designed to put a youthful face on a company struggling to maintain commercial interest in a medium that’s been shedding audience for years. It brings consistent branding to terrestrial stations across the country, offers Pandora-esque apps, and puts together concerts that bring together a dizzying array of pop stars. Its CES party at Haze brought superstar DJ Afrojack to the stage along with my future wife, Ke$ha. 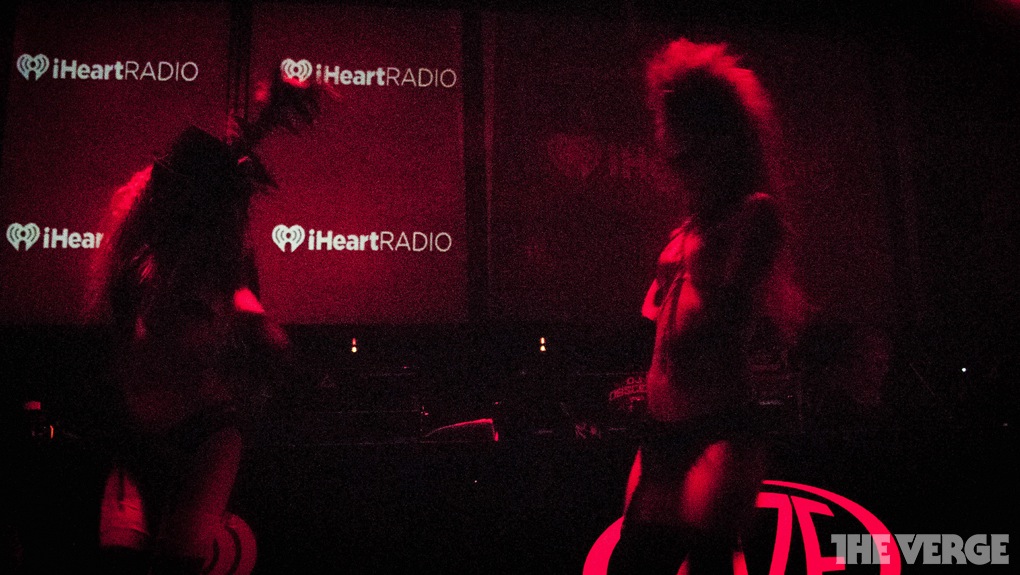 The club was a typical two-level Vegas pit, with bouncers lurking every few feet to keep the riff raff away from VIP tables littered with carafes of orange and cranberry juice and bottles of Grey Goose and Patrón. Onstage were two homoerotic barely-legal showgirls jacking their bodies to the beats of warm up man DJ Obscene, whose obviously Clear Channel-curated playlist was peppered with sensual audio drops of a woman cooing “I heart radio,” a very dissociative form of meta-advertising in a room crowded with people who were selling better ways to connect your iPod to your car stereo. 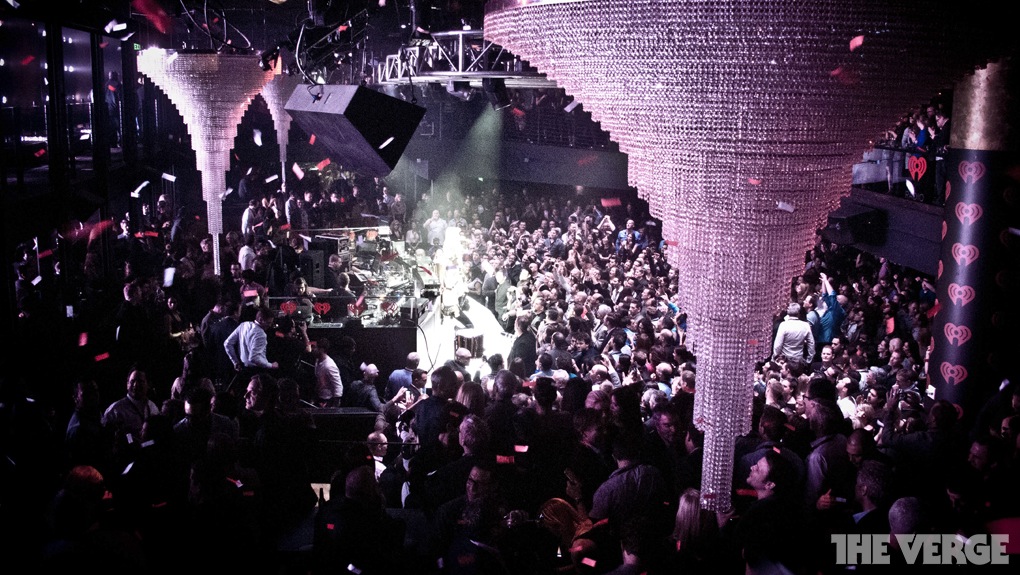 Free booze is a force that gives us meaning

The crowd, noticeably whiter, manlier, and middler-aged than the usual Vegas club affair, congregated around the open bars throughout the club, with lines that stretched so far back that it was often difficult to navigate the space without bumping into someone’s Cosmo. An installation on the second floor held a life-size diorama of a lounge adorned with Ke$ha and Afrojack posters. On a chaise, holding an iHeartRadio pillow under her arm, was a beautiful black model dressed in a bustier and top hat, a scene that could have been ripped from some sort of twisted scene from Django Unchained. I was really beginning to miss that pizza and beer on the other side of town, but I had to stay put because my girl was imminently in the house. 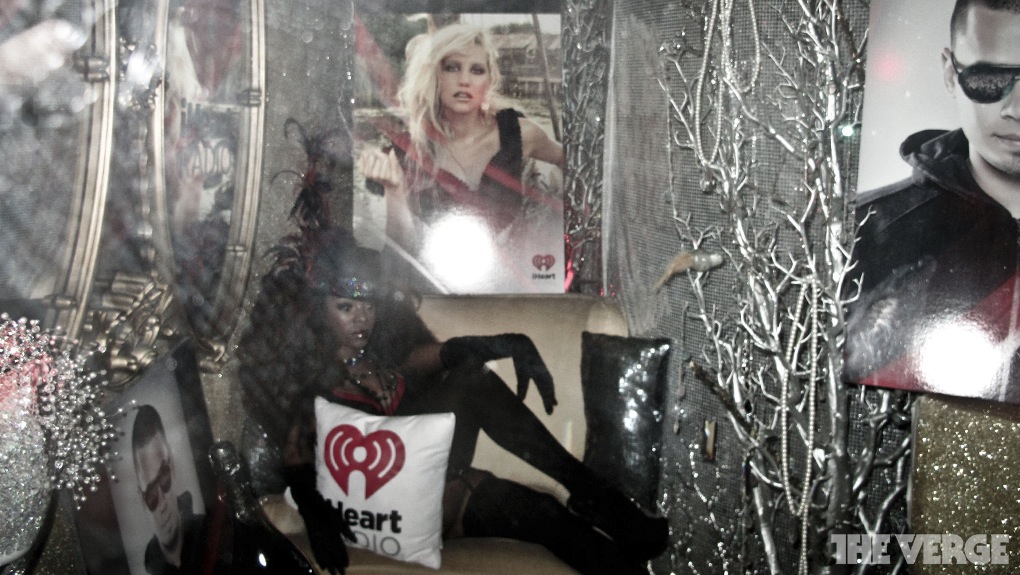 Walking a fine line between surrealism and degradation

I love Ke$ha and her dirty ol’ mouth. Last year I saw her perform at the Gibson Amphitheater in Los Angeles, and in addition to having laser goggles, a glitter cannon, and a gigantic walking penis onstage, she spent a lot of time just sitting in a chair choking back Jack Daniels and slurring preciously debaucherous stories of her alcohol-soaked existence as a broke barfly musician in LA. It was like a gift from heaven. 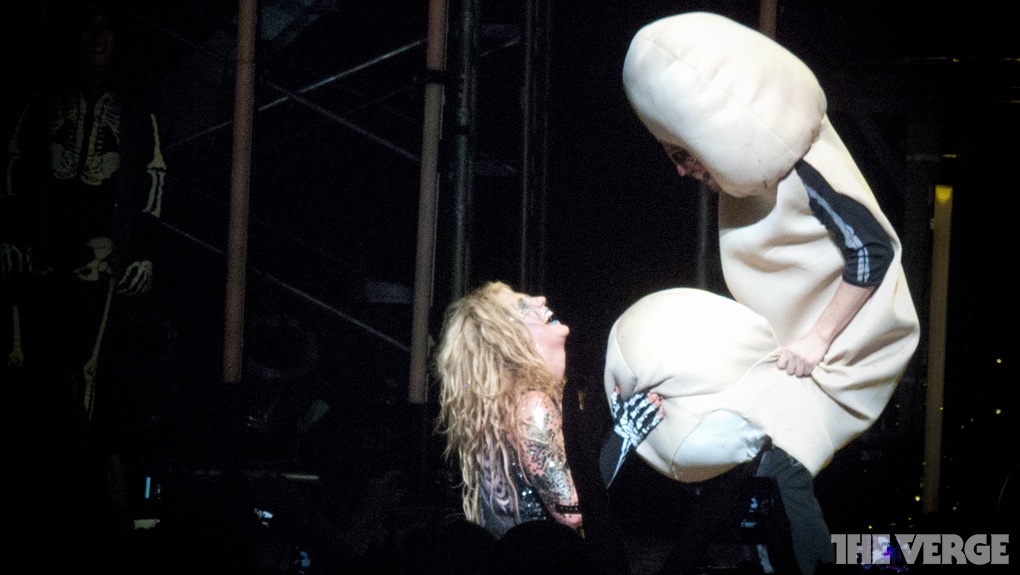 That’s my girl right there with the talking penis 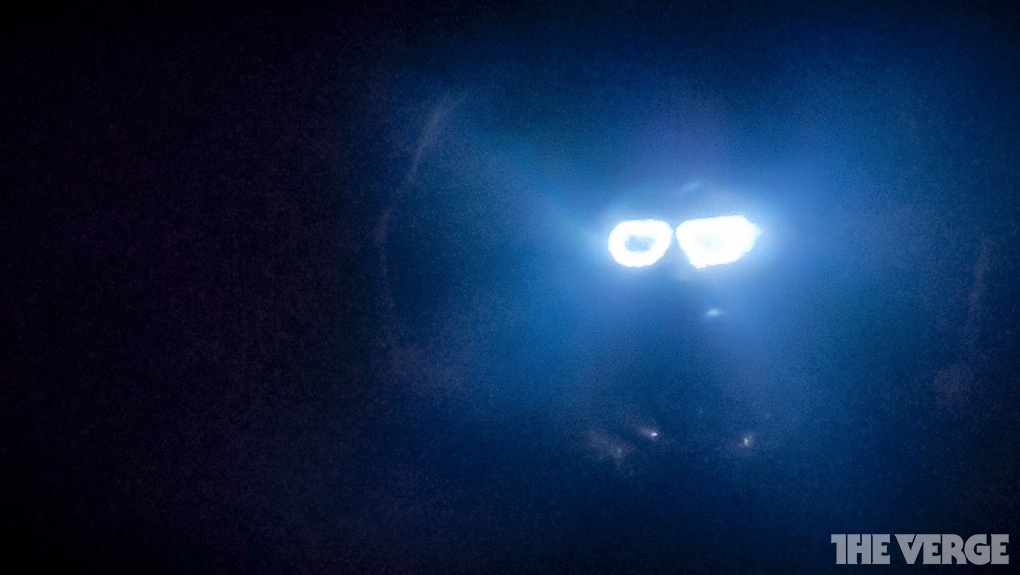 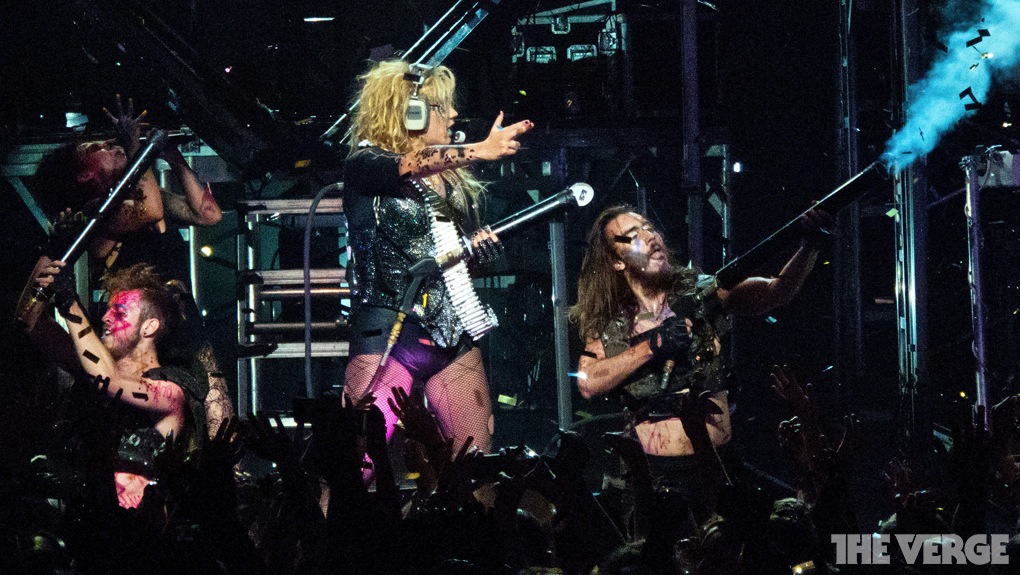 Her performance last night at Haze was more like a swift kick to the nuts. DJ Obscene made the announcement and she took the stage with businesslike precision, flanked by two generic S&M gayboys whose facial expressions and gyrations echoed her raucous lyrics. To my horror, she launched into the lowest form of pop expression: the three-song medley, normally reserved for appearances at childrens’ hospitals or on Oprah. “Blow,” “TiK ToK,” and “Die Young.” She hopped over the DJ booth and was gone as quickly as she appeared. I doubt she had even had a shot before she came onstage. Cold as ice. Balding execs tried to smile like they knew what was going on. She probably collected her cash and went to bed after that. 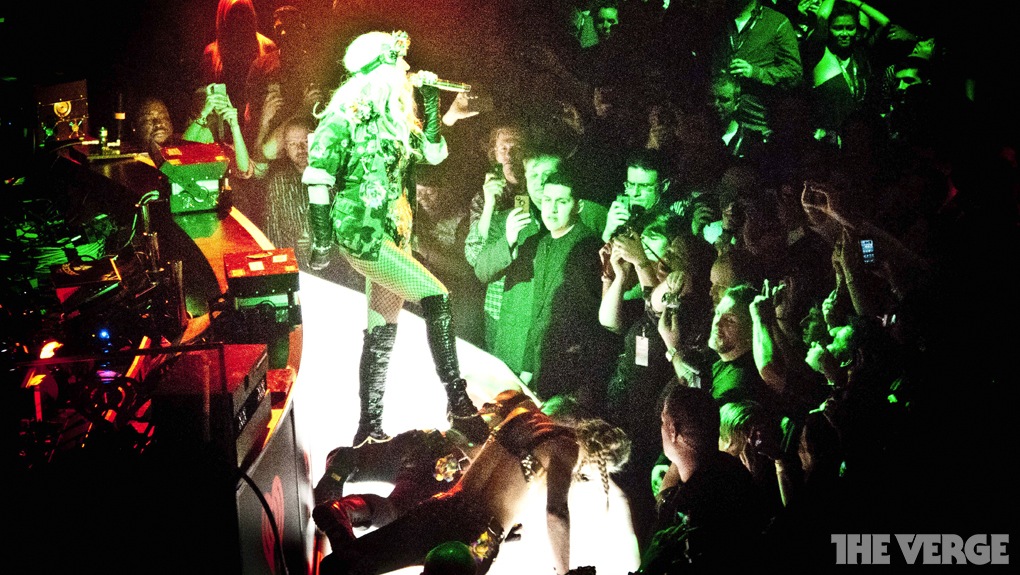 I didn’t think that anyone could ruin Ke$ha for me, but I gotta hand it to Clear Channel. It had distilled the worst aspects of popular culture and nebulous marketing schemes into a single hazy point that they then drove straight into my iHeart.

Taking a step back, though, it’s all good. Lavish parties like these are a hallmark of inevitable collapse, and I, for one, am growing impatient for this particular corporation’s grip upon the airwaves to be shattered, its coffers emptied by a long history of snake-oil ad sales techniques and a growing public realization that its contribution to music, no matter how rosily it’s perfumed, has nothing to do with actually enjoying music.

Ke$h, babe, since I know you’re reading this, I just wanna tell you that I hope you had a good night’s sleep. I know you enjoyed the show last night about as much as I did. Let’s run away to the liquor store and never come back.