Better than Nielsen: Twitter breaks down TV behavior by demographics, device, and genre

Better than Nielsen: Twitter breaks down TV behavior by demographics, device, and genre

Twitter has released a twenty-page booklet for advertisers on trends in television viewing and Twitter use in the UK. The Twitter TV Book (registration required) is rich with data gathered by Twitter as well as its analytics and advertising partners. Not only does it show how ordinary people use Twitter together with other media, it tips how TV programmers, networks, and advertisers are going to drive the Twitter experience in the future.

Tell me what you watch, and I'll tell you how you tweet

First are sheer numbers: of the more than 10 million active UK Twitter users, 60 percent use Twitter while watching television, and a full 40 percent of Twitter traffic during peak time is about television. This breaks down further by age, gender, and form factor, with the semi-surprising result that teens tend to tweet from the desktop while viewers above 30 are more likely to tweet from mobile.

Next come the case studies: for dramas like Homeland, Twitter use is clustered around the beginning and end of episodes; news programs like the exposé "Jimmy Savile: What the BBC Knew" drive conversation for hours after the end of the broadcast; the case of the music reality show X Factor, tweet spikes during singer James Arthur's performances tipped him as the eventual winner of the contest well before fans had voted. 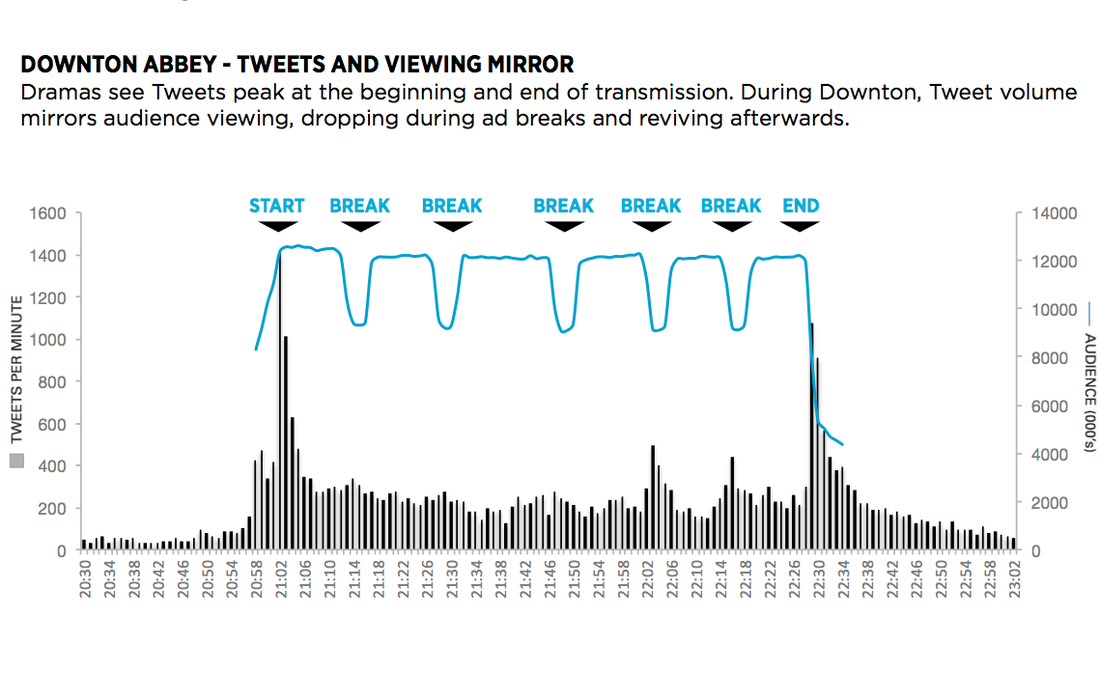 Most of this data is intuitive, but some of it is not, and even contradicts itself. For Downton Abbey, Twitter use fell off during commercial breaks, as viewers changed the channel or shifted attention; for Dynamo: Mission Impossible, tweet volume picked up on breaks. The lesson appears to be that advertising against or during these shows needs to be microtargeted to the specific behavior profiles of their fans. On the plus side, if you're an advertiser, the data now exists to help you do exactly that.

This data will change how ads work, on Twitter and on TV

If Twitter is morphing into a next-generation, real-time advertising platform (and it is), it has to put this data to work to deliver ads that are more effective, engaging, and efficient than anything else currently out there. Because television is the closest thing we have to an existing real-time media and advertising platform, it provides the template. But short of eyeball tracking or (in some cases) behavior-tracking code running on devices, traditional TV metrics can't tell advertisers what Twitter can. Nor can it tell them how to affect viewers' behavior. This is where the Twitter TV Book, along with Twitter's various best practices guidelines for media companies, really gets interesting.

Blurring distinctions between media — and between watching and buying

Here's how advertising on Twitter is already beginning to work. Companies use data on viewers' Twitter use to time and pair specific ad campaigns with specific programs, offering ads on both TV and Twitter. If viewers tweet about the TV ads they see (and the study shows that overwhelmingly, they do), they're directed to promoted trends, accounts, and hashtag campaigns that further help turn interest in the ad into purchase intent. That data in turn can help advertisers match Twitter ads to viewers who don't mention the ads, just the programs, or even television ads to viewers who don't even go on Twitter. It's a circle of continually updated data, multiple media and form factors, and online customer behavior. It's also where the line between different forms of media, and the consumption of media and other products becomes increasingly blurred.

Furthermore, this is only with the advertising products Twitter has currently deployed. As its information gets better, those will grow and change, too. It's still very early in Twitter's evolution, but the service that began as a way to broadcast text messages to friends using the internet is well on its way to becoming something both very different, and more thoroughly enmeshed in the broader culture, in ways that are both visible and invisible.