CNET disqualifies Hopper DVR due to CBS lawsuit; no products of companies in litigation with parent will be reviewed

Chalk it up to the conflicts of being a giant media company. CNET made Dish Network's acclaimed but controversial Hopper with Sling DVR a finalist in its "Best of CES" awards. But CNET's parent company CBS objected, because it's suing Dish over the commercial-skipping feature in its DVRs.

The Hopper with Sling was disqualified from CNET's awards shortly before the winners were announced. CNET attached a disclaimer to its list of award finalists:

The Dish Hopper with Sling was removed from consideration due to active litigation involving our parent company CBS Corp. We will no longer be reviewing products manufactured by companies with which we are in litigation with respect to such product.Dish CEO Joe Clayton accused CBS of censorship and "heavy-handed tactics" in a press statement, writing that the company was "saddened by CNET's staff being denied its editorial independence." CNET public relations did not immediately respond to a request for comment, but clarified on Twitter that the ban applied to reviews (but not news) of products "subject to active litigation" by its parent company. 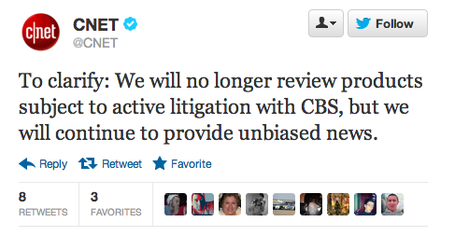 Still, the fact that CNET now isn't just prohibited from giving Dish DVRs awards, but any reviews whatsoever, is unlikely to make Clayton's charge of censorship go away. Furthermore, since most US news organizations are owned by large conglomerates with several divisions and many occasions for conflicts of interest, CBS' decision could potentially set a dangerous precedent. As a tech journalist, it's also just a rotten thing to do to writers and editors who've been promised editorial independence and are just trying to do their jobs.

Reviews ban would affect Aereo, others

CNET editorial staff would not comment on the record, but were clearly upset by the new policy handed down by CBS. An initial search turned up no comparable restrictions on CNET coverage due to a company's litigation status or any other relationship with CBS. Neither Fox or NBC have placed similar restrictions on their coverage of Dish DVRs, despite also being involved in litigation with Dish. Other products currently affected by the ban would include Aereo, which CNET reviewed in March shortly after CBS and other networks filed suit against it. At that time, CNET marked CBS' lawsuit against Aereo with a simple disclosure.

Sources said that CBS appeared to have concerns that Dish could use positive statements from reviews by CNET or other CBS Interactive companies in court to embarrass or contradict testimony given by CBS. (Besides CNET, CBS also owns TechRepublic and ZDNet.) Other sources, however, questioned that interpretation.

Meanwhile, Dish continues to use pushback from television networks to position itself as the champion of the people. "We always stand with the consumer," Clayton said in an interview just before CES. "That means sometimes we'll have lawsuits."