At its best, augmented reality can promise a heads-up display for your entire life. But all too often, the overlay it creates adds little but pain and confusion. That was fully what I expected from Disney's foray into augmented reality toys when I first heard about them. Aimed at a young audience, the toys are built by licensee Jakks, and the first descriptions sounded abysmal: who wants to stare at a toy while watching somebody else — even a Disney character — play with it? After seeing the first versions, I'm not exactly reassured, but I've upgraded my opinion: the idea has promise, but it's not there yet.

The technology that powers Disney's new toys is called DreamPlay, built in a partnership between Jakks and NantWorks, a company founded by the richest man in Los Angeles. Much of NantWorks' augmented reality work is in advertising, and developing for Disney means leaving its comfort zone of connecting people with the right promotional content. Fortunately, DreamPlay is more interactive than I'd originally thought. Some of the toys I saw indeed looked dead boring, including bongo drums that forced you to watch The Little Mermaid's Sebastian play and sing while you stood on. But others incorporated genuinely clever ideas. Looking at the piano above through an iPad brings up a virtual Rapunzel who attempts to teach you to play a song, and one general-purpose app lets you decorate butterflies and release them around the room. 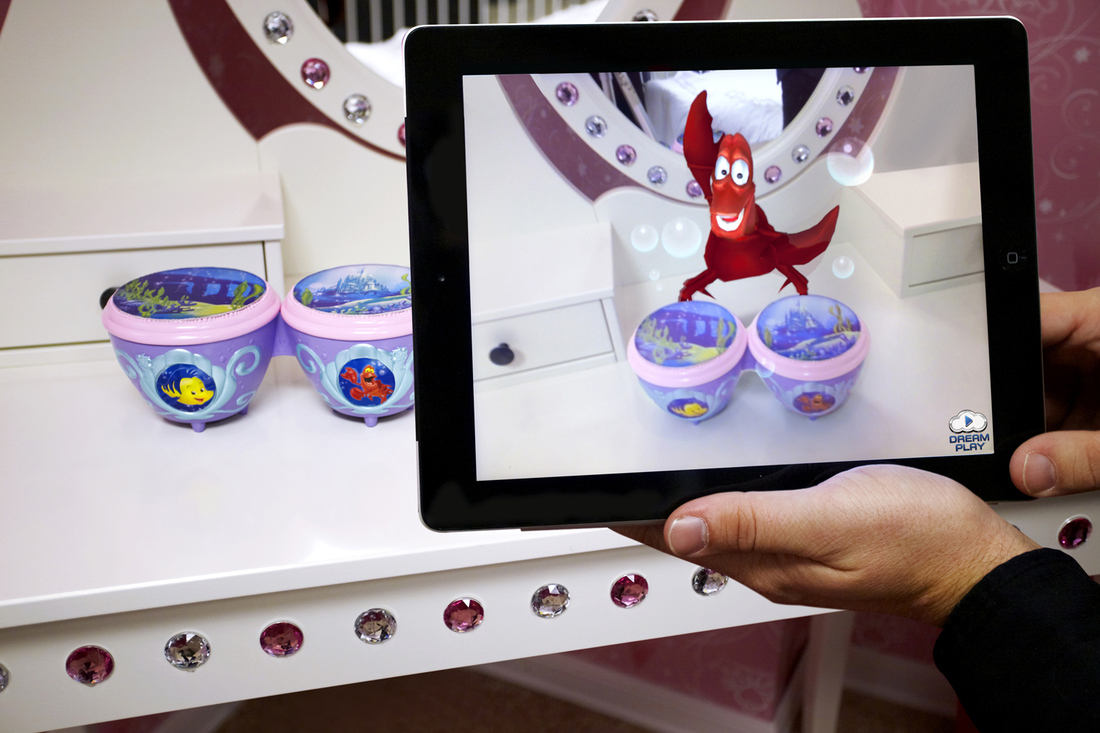 Actually using the app, though, creates its own set of problems. Seeing the bongo animation required holding the tablet in exactly the right place: dropping it by an inch or so cut everything off, and finding the sweet spot wasn't easy. As an adult, it's frustrating; as a child, I'd probably have wondered how I killed Sebastian. Learning to play a piano with augmented reality is an amazing idea, but reaching to touch the actual toy while balancing an iPad is tough enough with fully grown hands. Augmented reality isn't the problem here; the delivery system is.

Disney is launching augmented reality toys with a line of princess products in October; from there, it'll expand into other character lines. Until then, it's keeping a tight wrap on images of what it's developed, and we weren't allowed to take shots or video. We did learn that this is unrelated to Disney Infinity, the gaming project that's rumored to have augmented reality capabilities. As for these toys, I'm not going to write them off just yet, but I'm increasingly wondering if the promise of augmented reality can ever work within the limits of handheld devices.