Some Facebook users have seen an unusual popup when they attempt to send messages to people outside their network. It notes that the message will be filtered, but offers to deliver it to the top of the recipient's inbox anyway — for a cool $100.

Facebook began experimenting with a pay-to-message option in December when it first introduced filters including the "Other" folder. In initial tests, the toll was $1. According to Mashable, Facebook confirms the $100 option is part of that test, and says it's testing "some extreme price points to see what works to filter spam." It's anyone's guess exactly what the final toll will be.

Mashable reported seeing $100 as the fee to send a message to Facebook founder and CEO Mark Zuckerberg, but other users have seen the same price for non-billionaires. Kate Gardiner posted the screenshot below to a Facebook group, suggesting that at least in this test, the figure isn't metered depending on the popularity of the user. For now, unless you're part of the test group, you still can't send a note to Zuck, even if you'd be willing to spend as much as $100 for the privilege. 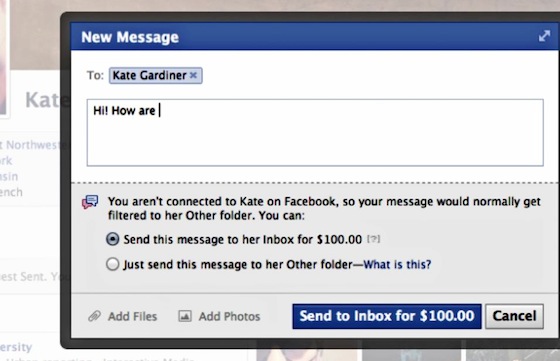