Invasion of the body trackers: take me to your leader

Fitness devices break out at CES, but there's still no obvious winner

Share All sharing options for: Invasion of the body trackers: take me to your leader

There's no doubt about it — CES 2013 marked the point where fitness- and health-tracking devices became a legitimate affair. The category until now has been dominated by a few success stories — Fitbit, FuelBand, and so on — and true to CES form we're seeing a lot more companies attempting to cash in. After all, "people in America, frankly, are really fat" as Fitbit CEO James Park told The Verge in an interview yesterday; the obesity problem has been a hot-button issue for decades, and companies and startups are now attempting to leverage the rise of smartphones to capitalize on the epidemic. According to Travis Bogard, VP of product for Jawbone which produces the Up fitness band, these devices make sense because "people know more about their iPhones than their health." But the majority of new products we've seen at this year's show have been me-too attempts bringing little to the table. What's the future of these devices — exciting new paradigm in personal data, or evolutionary dead end?

The majority of these products are glorified pedometers. A simple accelerometer measures your movements with a fairly high degree of accuracy, but the magic happens in software; the data is synced to apps which convert it into useful information about the user's lifestyle, offering a picture of their activity over time. The differences between major competitors are mostly superficial. Fitbit makes tiny clip-on Bluetooth devices that track steps and sleep patterns, and just announced the wristband-style Flex. Jawbone's Up does the same thing, syncing with an iPhone via a physical plug. Nike's FuelBand is much the same, but loses the sleep-tracking functionality in favor of a dot matrix display and Bluetooth connectivity. All have mobile apps that convert the data into attractive graphs and charts. Are they cool? Sure. Are they unique ideas? Not in the slightest.

For the most part, the new devices announced at CES this year haven't done a lot to shake things up. Fitbug's Orb looks very similar to Fitbit, but told us that it aims to compete on price and with an enterprise-focused business model. Withings, an early leader in the field with its Bodyscale, showed the Fitbit-style Smart Activity Tracker to get its users out of the house. Perhaps the most egregious example of overzealous flattery comes from LG, whose Smart Activity Tracker has the exact same name as Withings' new product and looks almost identical to the FuelBand. 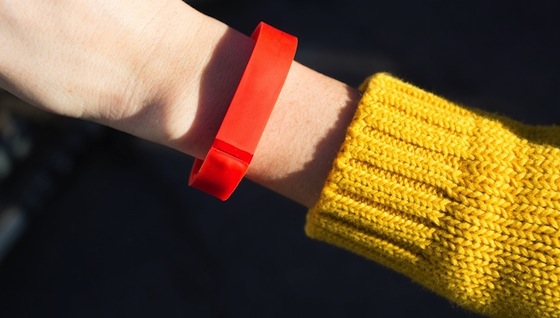 There were glimmers of innovation on the show floor. BodyMedia is aiming to compete based on more accurate and comprehensive sensing technology, with several components combining to capture over 5,000 data points per minute. Hapilabs' bizarre Hapifork applies the fitness-tracking blueprint to another area of health by measuring how often you eat and telling you when you're doing it too much. Both products are cool, but neither seems likely to take over the space — their focus and appeal are narrowed, not broadened.

Instead, what we're seeing is a maturation of the category. With Fitbit's Flex, the industry appears to be crystallizing around wristbands as the most convenient form factor; in yesterday's Verge interview, Fitbit CEO James Park said that one reason behind the company's shift to a wristband device was that "some people like to show off the fact that they're tracking their fitness and becoming more healthy." Jawbone VP of product Travis Bogard, meanwhile, told us that the wrist is a "interesting place" that allows for a lot of flexibility in data gleaned from the Up. It also makes for an unobtrusive and comfortable design that lets users essentially forget about having to wear it.

"No-one wants to wear a computer."

That's not to say that it's been perfected. While Jawbone places a lot of emphasis on Yves Behar's sleek design for the Up, saying "no-one wants to wear a computer," Bogard admitted that the company would "love to make it smaller." He told me that if adding new technology would decrease the band's battery life or balloon its size, Jawbone probably wouldn't want to do it. James Park, meanwhile, says that there are a lot of areas Fitbit could move into in the future in terms of what data to track - blood pressure, stress, deeper sleep, and heartbeat were all called out as potential new avenues. From speaking to Park and Bogard, however, it seems that we're unlikely to see much in the way of radical new changes to the fitness-tracking experience any time soon.

And that's been borne out on the CES show floor, where there are a huge number of gadgets that track similar data in similar ways. How can the big guns hope to differentiate themselves? Jawbone tried to set the Up apart with some of its unique features like the 30-minute vibration alert for when you're not moving, arguing that "it's not just about data," but it's clear that software is a major part of the equation. One of Fitbit's main selling points is the API that hooks into products from other companies such as Withings — all designed to get users more deeply entwined in the ecosystem and ultimately sell more devices, of course. Jawbone's app has seen a dramatic improvement since the first Up's aborted launch, too, and it probably offers the slickest experience of any product to date. Of course, a major selling point for just about any of these products is their software ecosystem, with your data often locked to one company's output forever.

These products are extraordinarily easy to copy

Ultimately, the key feature of these devices may not be what they do, but what they don't do. Bogard told me that Jawbone constantly asks itself "How do we dumb this down?" to make it as easy as possible for users to learn about themselves, and Park sees Fitbit in a similar light; "You want to make things simple," he told The Verge yesterday. The problem with this approach, as we've seen at CES this week, is that it's extraordinarily easy to copy. With new companies sure to flood the market with copycat products over the upcoming year, and incumbent leaders largely happy with where they're at in terms of hardware innovation, the future of the category is anyone's guess.

Right now, fitness devices remind us of nothing as much as the pre-2007 smartphone — a few people thought they were cool to use, but it took one product to break through and make the entire category relevant to a mainstream audience. And, given the limited functionality of the current devices, we expect that inevitable product to be as different to what we see today as the iPhone was to its contemporaries. Maybe a smartwatch could be it; this CES gave us our first look at the finished Pebble, which looks like one of the biggest advances yet in one of the oldest wearable technologies. But then again, no-one really did predict the iPhone.

Health and fitness of CES 2013