'Joe Danger Touch' was born on PlayStation, but thrives on iPhone

How Hello Games made a console game work on a touchscreen

Share All sharing options for: 'Joe Danger Touch' was born on PlayStation, but thrives on iPhone

In 2010, tiny UK-based studio Hello Games released its first game, Joe Danger, as a downloadable title for the PlayStation 3. The game was well received — and went on to spawn a sequel and a special edition on Xbox Live Arcade — but its success also left managing director Sean Murray "feeling really down." The studio was expanding from its scrappy, four-man origins, and this meant that Murray didn't have much time to do what he really wanted: make games. "Then I started playing around with iOS development in my spare time," he says, "and it put a smile back on my face." The result of that "playing around" is Joe Danger Touch for iPhone and iPad. After spending some time as a hobby project, relegated to weekend work with help from indie dev Steven Burgess, the game finally launched this week for $2.99. What may surprise fans of the series, though, is not just that the game is fun — it's that the touch version might actually be better than its console counterparts.

The core idea of Joe Danger Touch is the same as it was in the previous games. You play a stuntman navigating through a series of increasingly difficult stages, avoiding danger, pulling off stunts, and collecting coins along the way. There are numerous secrets to collect in each level, plenty of characters to unlock, and the game maintains the series' trademark sense of humor — in some levels you'll be racing against a cupcake while jumping over a tank filled with cardboard sharks. It even looks as good as the games that have graced the PS3 and Xbox 360. And those good looks aren't muddied by on-screen controls, since there's no virtual d-pad or buttons to contend with in Joe Danger Touch.

Instead, the controls are all based around touch gestures. You can tap the screen to jump, for instance, or hold your finger down to duck under obstacles. A swipe to the left will make Joe pop a wheelie and you can tap on barriers to get them out of your way. Early on it feels like a one-button auto-runner in the mold of Jetpack Joyride, but as new controls are thrown your way the game proves itself to be much more complex and challenging than that, while still remaining intuitive. The learning curve is gentle enough that you don't feel overwhelmed figuring out a whole bunch of new gestures at once.

"I wanted it to feel like it could only work on iOS."

"I wanted it to feel like it could only work on iOS," says Murray, "because we've built it specifically for the device." The trick, he says, is that instead of simply porting the console version of Joe Danger, he built an entirely new game with a touchscreen in mind. And this was done without watering down the core experience. "Something people always think is that you need to dumb down games for iPhone," he says. "I really disagree. I agree that you can't directly port something that normally takes 16 digitals and four analogs to play and expect it to work well though. So, I'm hoping that someone watching you play Joe Danger on mobile would think 'Wow! It's the same game.'" 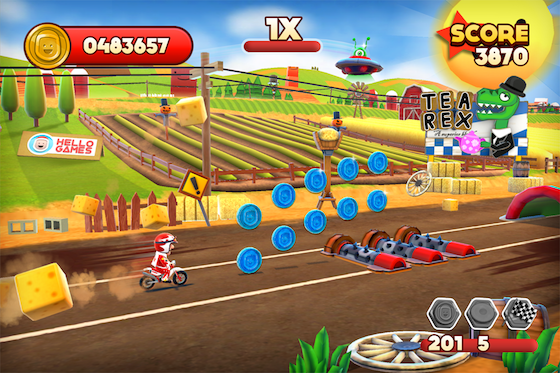 The game even introduces some cool new features like Game Center challenges. If you manage to score three medals in a level, you can then challenge a friend to do the same and beat your score, even if they haven't unlocked that stage yet. It's a great example of asynchronous multiplayer, and one of the few good reasons to actually use Game Center (other than playing Letterpress, of course). As with many mobile releases, Joe Danger Touch may also end up getting better with time, as there are plans to expand the experience through future updates. But even in its current form, Joe Danger is one of the better arcade-style games on the platform, and the rare example of a game that made a smooth transition from controller to touch. "That's a massive triumph for us," says Murray.