The Chinese Electronics Show: can China's biggest brands buy their way into America?

Hisense, Huawei, and others hawked smartphones, TVs, refrigerators, and themselves at this year's CES

Share All sharing options for: The Chinese Electronics Show: can China's biggest brands buy their way into America?

Huawei, Hisense, Changhong. These names are unfamiliar to Americans for now, but in a few years they will be as synonymous with consumer electronics as Sony and Samsung.

That’s the party line out of China, at least, where major electronics makers seem to have simultaneously decided that this year’s Consumer Electronics Show in Las Vegas would be their coming-out party.

When Microsoft decided it was too cool for CES and abandoned its anchor booth this year, Chinese megabrand Hisense jumped at the chance to take its place. Hisense’s prominent display easily cost tens if not hundreds of thousands of dollars, doubling the square footage of last year’s booth and featuring a giant circular stage, a cultural musical performance, and displays of what appeared to be every product and prototype it’s ever made.

The Chinese are the underdogs in the electronics industry, and they have a newcomer’s verve. They also have a great deal of confidence, however, having already established themselves in the most populous country on the planet. There seems to be a sense of manifest destiny, a belief that global takeover is simply in their cards.

"Well you know what? We already are a tier one."

"You’ve probably seen stuff this week saying ‘well hey, Hisense can come in and spend a lot of money and get a very big booth and it doesn’t make them a tier one,’" Hisense product manager Chris Porter told The Verge. "Well you know what? We already are a tier one. We're tier one in China, we're number one market share there, over twice the market share of Samsung. Australia, South Africa, Malaysia, Europe, same thing. It's not like we're trying to buy our way into tier one, we're just letting people know who Hisense really is."

Hisense used the CES spotlight to announce three new TV series, a glasses-free 3D TV concept, and partnerships with Roku and Marvell. The Hisense booth has a wide variety of products on display, including a transparent, 3D, touchscreen TV; facial tracking software; and a smart refrigerator with an Android tablet embedded in the door.

Hisense and its compatriots may not have had the best or most original products to show off at CES, but they had the most zeal out of the big corporations participating in the convention. CES has been criticized for waning relevance, with companies increasingly saving their biggest announcements for their own events, Apple-style. But for Chinese companies, CES is still a prestigious academy into which they desperately want admission. Several companies significantly increased their presence this year with press conferences and large floor displays, attacking the trade show so tenaciously that it’s hard not to infer an inferiority complex. 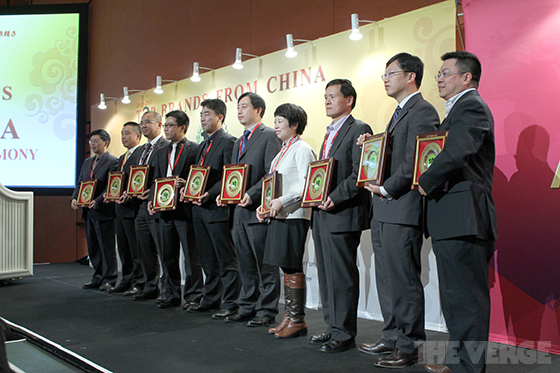 The recipients of the Top Brands From China awards, hosted by IDG.

The electronics industry in China is obviously huge, but Chinese companies aren’t known for innovation — an image they’re eager to change. Hisense executives said that the company has radically increased its investment in research and development, with a new partnership with MIT Media Lab and a new research facility in China with 5,000 engineers. Hisense has been making TVs under house brand names like Best Buy and Sears for years; TVs that Americans bought and enjoyed and that did not explode. Hisense makes its own panels, sells in 130 markets, and reported $13 billion in revenue in 2012.

Another great thing about the Chinese companies at CES: in addition to having big, flashy booths, their executives are refreshingly candid. In another interview, Huawei’s head of consumer electronics Richard Yu all but spat hot fire. Yu called Samsung’s plastic "cheap" and dismissed recent accusations that Huawei is a national security threat by saying that the US government "gives some noise."

"The best smartphone is from Huawei. Not from our competitors."

Huawei used CES as a stage to introduce the Ascend Mate, a 6.1-inch monster smartphone that Yu absolutely adores. Huawei can now claim at least one superlative: World’s Largest Phablet. On stage with the phablet, Yu was dynamo. He poured water over the phone, dropped it on the ground, and talked about using it in the shower, all with the kind of intense enthusiasm that cannot be faked. "The best smartphone is from Huawei. Not from our competitors," he said.

No American carriers have signed on with Huawei yet, however, so phablet lovers will have to wait.

Incumbents like LG and Panasonic still dominated the trade show floor, but the Chinese brands had a distinct presence. TCL Corporation had one of the brightest and most colorful displays in show, following Hisense’s strategy and showcasing a comprehensive lineup of products from a 110-inch 4K TV to its giant tablets, which were loaded with an enormous game of Bejeweled. Haier had a stately white booth filled with its washers, dryers, and TV displays, along with a full kitchen replica and a greeters’ booth where attendees could grab candy. 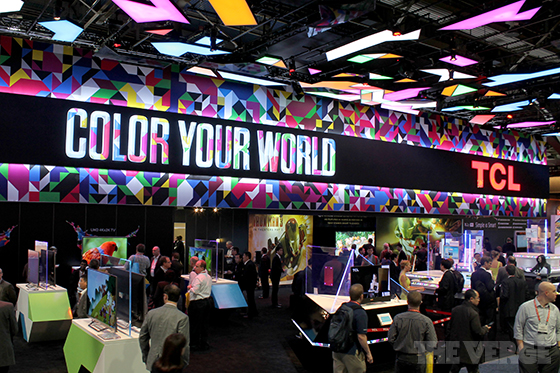 On Wednesday evening, executives from Chinese companies gathered at the swanky Wynn hotel for the seventh-annual Top Brands From China awards ceremony, put on by IDG and hosted by two smiling female MCs speaking first in Chinese and then English. "As you all know, China has not only become the place where top companies release products, but also an incubator and touchstone for products," the hostess said, "leading to a change in roles for China's [consumer electronics] companies, from just manufacturing to high-end brands."

That day is still far off. Hisense estimates it has three percent penetration in the US market, and its rather modest goal for 2013 is to increase that number to five percent. Huawei, TCL, ZTE, and others face obstacles even getting their products distributed in the US, with carriers slow to roll out the Chinese phones to their customers. Even when they do get products distributed, it's often without prominent (or any) branding.

"We are prepared. We are ready. We will succeed."

Despite the full-court press at CES, it still feels very early for a Chinese coup. With the exception of Lenovo, which bought IBM's ThinkPad division in 2005, the Chinese brands haven't yet attached themselves to truly innovative products — and are still attached, in some cases, to lousy ones. The colors in Iron Man on TCL’s 110-inch TV looked so bland that a guest at the booth wondered if the movie might have been a subpar pirated copy. Haier's booth featured an iPad knockoff so blatant visitors first wondered if the company was using real iPads. Its name? The HaiPad. 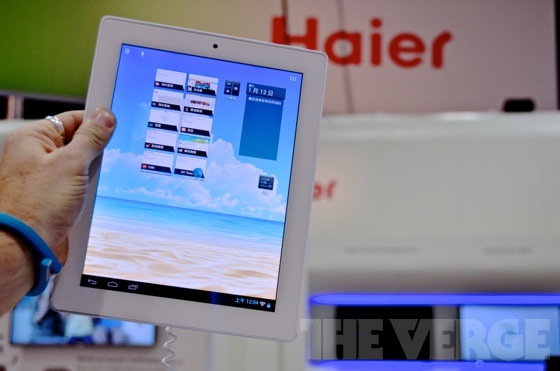 Haier's HaiPad is a blatant copy of the iPad.

And the Chinese marketing is also a bit off — an elaborate music and dance routine at Hisense's booth basically screamed "we're foreign!" and the press materials for the Top Brands From China event were nigh-indecipherable.

Still, the global creep of Chinese brands seems inevitable, if only because of sheer determination. "Confucius said, ‘when you turn 40, you better know your destiny,’" Dr. Weiping Huang, chief scientist at Chinese megabrand Hisense, told journalists at a press conference earlier this week. "Hisense has turned 40 just three years ago. We certainly know our destiny. We are prepared. We are ready. We will succeed."