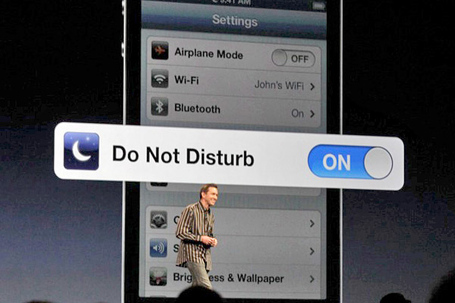 Like many others, I use iOS 6's Do Not Disturb mode a lot. Or at least, enough to know that it's a chore. Sure, one can schedule DND to enable itself at a specific time of day, but that is hardly ideal for everyone, or in every scenario. So as usual, we find ourself going in and out of the Settings app simply to enable an iOS function. Can't it be easier?

Since the release of Auxo (which as most of you know, started off as a concept on this forum), many people have let me know that while they love the toggles, they also want to see a toggle for Do Not Disturb. Toggles are the obvious solution to enabling and disabling core functions such as Wifi, Bluetooth, or 3G/LTE, but does it really make sense for DND to come in the form of a toggle? Personally, I don't think so.

At first, I looked at the Notification Center in OS X Mountain Lion (which allows you to enable and disable a DND-like function via an on/off switch) and came up with this. However, I found it to be unintuitive to have a two step process when the original point was to make enabling DND less of a hassle. Inspired by Do Not Disturb's status bar animation that presents the moon in an eclipse fashion, I came up with this (gif);

As you pull downward, the circular moon dynamically animates and eclipses into a crescent moon icon; the Do Not Disturb symbol. Releasing when it becomes a crescent will enable DND.

Here's an idea extending upon the previous concept.

When a user enables Do Not Disturb, their natural assumption is that they will no longer be disturbed. However, banner alerts still pop up with their normal intrusive fashion, vibrations and all. Considering the crescent is visible in the status bar whether the phone is locked or not, how is the user to naturally know that DND applies to the lock screen only? And more importantly, what is the user to do if they don't want to be disturbed while the device is actually in use, and not just locked?

This concept addresses that with non obtrusive alerts for when Do Not Disturbed is enabled (gif);