The banking startup reaches a crucial milestone, but it's still just getting started

Today online banking startup Simple announced the first Android version of its app, which is designed to replace traditional personal banking with an online-only experience. The app allows customers to see their balance at a glance, find nearby ATMs, deposit checks, as well as view and categorize their past spending.

The Portland-based startup generated a lot of buzz when it teased the product two years ago, partly because it was cofounded by early Twitter engineer Alex Payne, who has since stepped back into an advisory role at Simple. The company built up a wait list of more than 125,000 potential customers and started sending out invites eight months ago when it launched its iPhone app. However, Android users were told to wait.

Simple is a software and customer service company, not a bank

Simple is a software and customer service company, not a bank. The startup partners with federally-insured bank Bancorp to handle the money, with the goal of building digital products that make it so that customers never have to walk into a bank again. It’s similar to online banking options offered by ING Direct and Ally Bank.

Simple sets itself apart by focusing on the average banking customer and building an aesthetically-pleasing, user-friendly experience that incorporates some of the money-managing features found in the popular personal finance tool Mint and others like it. The company also emphasizes minimizing fees and aligning its financial interests with those of its customers. Simple eschews service fees and plans to make its income off of interest and the interchange fees it collects from merchants when customers make a purchase using a Simple card.

Simple has also prioritized the need for useful, secure mobile apps. The Android app lets users quickly see their "Safe-to-Spend" balance from any page in the app, which shows their pending payments, scheduled payments, and spending goals. It also lets users see their recent account activity and their account numbers. Recent transactions are processed within seconds and viewable immediately, unlike at bigger banks where transactions are processed in batches. Customers can use the app to locate nearby ATMs that won’t charge a fee when used with the Simple debit card. Simple partners with Allpoint, which claims to have 50,000 surcharge-free ATMs in its network. 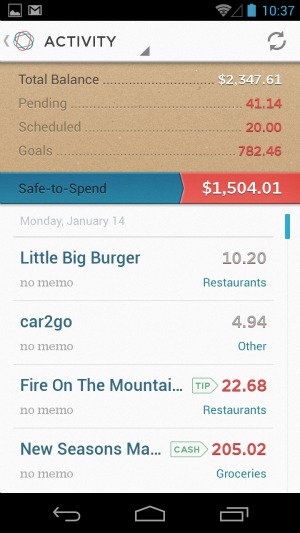 Simple’s Android app took about four months to build because company executives decided they wanted to build a version for Android from scratch rather than simply port the iPhone version over. To achieve this, Simple partnered with New York-based development shop Two Toasters. "It probably would have made business sense to just port the app and get it out there as fast as we could," Simple’s head of mobile engineering, Dustin Barker, told The Verge. "But that's just not what we do. I'm just really excited to put an app out there that is Simple reimagined for Android."

Now that the Android version is launched, Barker says Simple’s next goal is to build out both apps until they have matching features. The company then plans to introduce an iPad-native app. No version is planned for Windows phones, although the company hasn’t ruled out the possibility.

Right now, users must have an Android or iOS device, a US Social Security number, and be willing to transfer money into the app in order to get started. It can be tough to convince customers to switch to a new bank, but Simple says it has 20,000 users after launching for iOS with no paid marketing. The Android app encrypts all communication; Simple also independently verifies the identity of the recipient when data is sent. "When you're using the app, there is no way that you could be communicating with anyone but Simple," Barker said. "There is no way for anyone to eavesdrop."

Even though we first heard about Simple more than two years ago, the company is still just getting off its feet. Simple had technical difficulties in November that disrupted the display of payments in the web and mobile app. The company says no transaction were affected, but the event still left customers feeling jittery — it is money, after all. That’s one advantage incumbents have over startups like Simple: reliability.

"A lot of people have switched to Simple as their only bank account."

Banks like Bank of America, Wells Fargo, and Citi are also updating their mobile apps and tinkering with their online banking offerings as Simple gets off the ground. Bank of America just conducted an extensive online survey of its customers, asking them to grade each aspect of the experience. Bank of America has also been experimenting with innovative features, such as discounts at restaurants and bars that are tailored to a customer’s spending and appear inline on the bill.

Meanwhile, Simple customers cannot make cash deposits, set up joint accounts, or make peer-to-peer payments yet. "There are some features we don’t have right now," cofounder Josh Reich told The Verge. "But really, a lot of people have switched to Simple as their only bank account. A lot of customers have made this transition pretty well."