What can a film's color scheme say about its narrative? According to Spotmaps, quite a lot. Created by Andy Willis, Spotmaps is a Python-based project that conceptualizes classic movies not in words or storyboards, but highly-detailed color patterns. The project, which was inspired by Brendan Dawes' Cinema Redux experiment, translates every second of a film into a single block of color, based on a composite of every frame within that second. These blocks are then arranged in chronological order for every film, with 60 in each row (representing one minute of screen time). The result is a massive, pixelated map that allows viewers to visualize the chromatic contours of a film in a single glance.

The project also makes for some interesting comparisons across directors and genres. Animated films like Wall-E, embedded below on the left, tend to have a more varied palette than live action films, likely due to the fact that their directors aren't restricted to the confines of live sets and film stocks. Wes Anderson's Moonrise Kingdom, by comparison, consists almost entirely of yellows and browns (right image, below) — a pattern that has become something of a stylistic fingerprint across many of his films. The images can shed some light on a film's narrative structure, as well. Tron Legacy, for example, is divided into three semi-distinct phases: it's bookended by brown and black hues, with its massive middle section comprised mainly of blues.

Thus far, Willis has uploaded Spotmaps of nearly 300 films. You can browse them by title, genre, or director here. 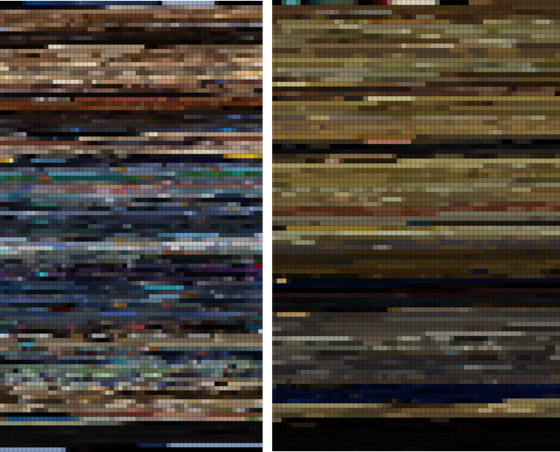