With the reality distortion field gone, Apple's stock falls back to earth

Apple's stock took a sharp jump downwards at the opening bell this morning, continuing the rough slide it's been on since the last quarter of 2012. The stock is currently trading around $488 a share. Back in September of 2012, at its peak price of $705 a share, Apple was far and away the world's most valuable company, a crowning achievement for a company that had its share of dark days in the 1990s. But with the loss of its iconic leader, Steve Jobs, and recent flubs on software such as new Maps app, investors seem to have lost much of their confidence in Apple. 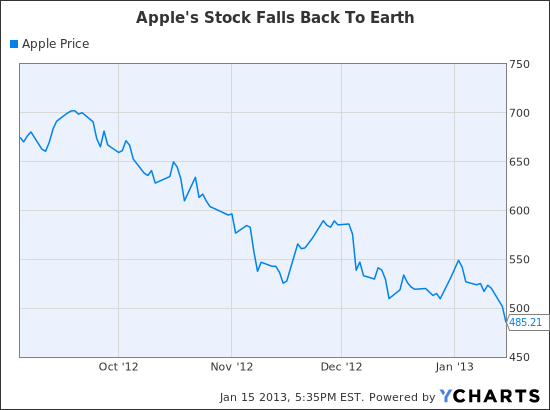 "They are printing money, and the market doesn't care."

There have been rumors of softening demand for Apple's core products, like the iPhone 5. And while analysts like Piper Jaffray's Gene Munster have been predicting an Apple TV for years, the company seems to have settled into releasing new iterations of old products — a slightly bigger iPhone, a slightly smaller iPad — rather than the sort of category defining innovations they produced with the original iPod, iPhone and iPad. A number of high profile departures may also have contributed to the bearish turn in the stock. Apple is still the most valuable company in the world, an incredibly profitable giant with a deep team and products that are the envy of other tech titans. But it seems to have lost the momentum it had in 2011 and 2012, at least in the eyes of investors.

"The company has never traded on its profit, it's the exact opposite of Amazon," said trader and Stocktwits founder Howard Lindzon. "Apple has been rewarded for its innovation. The market is expecting more magic. Apple is kind of stuck, for a company that executes so flawlessly. They are printing money, and the market doesn't care."