Tweet my fridge: the bizarre home appliances of CES

Just because you can do something doesn't mean you should

This year's CES has been the usual wild ride of product announcements and press conference mayhem, but for me it was about a lot more than just tablets or phones. Instead, I've been taking a personal journey into the dark side of CES 2013; the perfect dream portrayed by companies who want to own your life. That's right — I'm talking about home appliances. Last year's encounters with "smart" washers, closets, and windows convinced me that I'd found my new beat. And this year, I couldn't shake the feeling that my show experience had already been summed up best by my erudite colleague Nilay Patel when he covered Samsung's atypically relaxed keynote address:

"Evernote on your fridge, man, it's here. You can connect it to your baby monitor."

Samsung's T9000 smart fridge is a Wi-Fi connected food-cooling device that has a 10-inch touchscreen running a proprietary OS; available apps include Twitter, Epicurious, a Google Calendar client, and more. It's not the company's first effort in this space, but it's the biggest and most impressive to date. If you're into this kind of thing. Which I am as much as anyone, I suppose, but I don't have several thousand dollars to drop on a smart fridge.

Samsung's gargantuan CES booth is a city constructed to evangelize the utopian vision of chaebol culture. Aided by charming and knowledgeable assistants, I went on a ride through a surrealist picture of Samsung-led singularity where the company controls everything in a customer's life, helping them navigate the pitfalls of daily chores in a dazzling display of synchronicity. But in a world where we all have touchscreen supercomputers in our pockets around the clock, why on earth would our white goods need one too? I tried my best to find out, and booth assistants did their best to convince me. 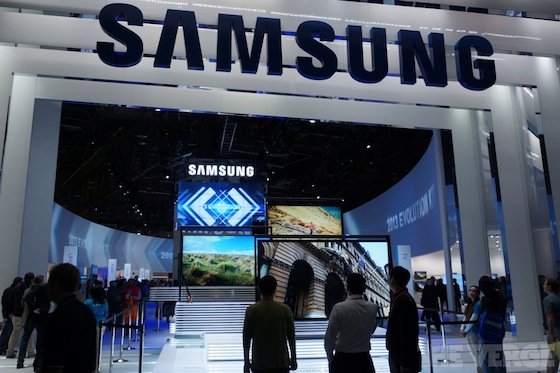 So, Evernote on your fridge. For an example given by Samsung of how this might play out in real-world use, picture the scene: someone is out shopping, and their partner stays at home. They're using Evernote for a shared shopping list, as many people do, but the person at home can see that something is missing — and it isn't in the fridge. So, by entering in the missing item on the shopping list, the shopper won't forget to buy anything.

Why couldn't you just do that on your phone? Or, heaven forbid, use the actual phone function of your phone? Well, if you're as diligent a customer as Samsung wants you to be, you'd have been cataloging the contents of your fridge all along, and would have known from the screen that you were out of milk. But this seems like a ludicrous amount of effort to glean information that you could get in a few seconds simply by opening the door. Samsung's representative said it was designed to slot into the busy lives of parents shuttling their kids from school to sports practice and so on. I thought about the prospect of my own mother navigating this Rube Goldberg-like software, painstakingly recording the state of cabbages in her digital fridge. It didn't last long.

Kitchen appliance design in 2013 has devolved into a Kafkaesque nightmare

Even if you do buy into Samsung's concept of advanced fridge management software, things remain fraught with confusion. One useful-sounding feature is the ability to track expiry dates, for example, letting you know when you'll need to use up items. Trouble is, expiry dates are set by regulatory bodies, and Samsung says its fridges' advanced cooling technology can keep food fresh for far longer than others. So, you'll be looking at inaccurate information that isn't actually calibrated to your fridge, all because of the supposedly sophisticated "smart" features. Kitchen appliance design in 2013 has devolved into a Kafkaesque nightmare.

I didn't fare much better at LG's booth. As will come as little surprise to anyone familiar with the other products offered by the Korean giant, LG's kitchen range is a slightly less sleek mirror image of bigger brother Samsung, with touchscreen washers and fridges abound. Now, I'll say this for Samsung — those guys can make a responsive touchscreen fridge. LG's, on the other hand, offered performance reminiscent of one of the company's smartphones from a few years ago, making it maddeningly difficult to write and stick a virtual Post-it note to the door.

NFC ovens could save literally seconds of time

LG's big innovation this year is NFC-enabled ovens. Look through a recipe book on your phone, tap it to a receiver located just above the hob, and boom — your cooking settings have been programmed for you. This could save literally seconds of time that would otherwise have been spent pressing a couple of the many buttons next to the NFC receiver. Will it make your food taste any better? I guess not, though LG's rep did cite the infrared grills that were introduced a few years ago as a way to get juicier cooking.

That's the thing with these smart appliances — the flashy features are limited to the high end, so I'd have a hard time calling them bad products at a base level. Buy them, and they'll undoubtedly do their job. But my washing machine was about $300 from Muji, and it does a pretty good job of getting my clothes clean even without a Wi-Fi antenna. My Haier fridge came free when I signed up for an internet connection four years ago back in Osaka, and it's kept things cool ever since. I think that, to a large extent, the performance of home appliances is a solved problem, and the proliferation of smartphones makes the addition of an extra screen into the equation superfluous at best. It's like what's happened with smart TVs — we've suffered through years of companies trying to push their clunky interfaces on us, but are only now starting to realize that the iPad was the answer all along.

But that's not to say there's no room for innovation in the space. Haier's large booth seemed like the best place to look; the Chinese company is the largest washing machine manufacturer in the world, a representative told me, though it only has around 5 percent marketshare in the US. The big feature on show at CES (besides a dubious wireless-charging blender) was the ludicrously named 3D Washing machine — turns out 3D isn't dead, after all. It's a prototype system that involves a direct double drive to make what are apparently massive reductions in washing time, noise, and energy consumption. Haier doesn't expect to produce consumer products with the technology for a couple of years, but if its claims are true, it sounds like the kind of thing I'd be interested in paying extra for.

At least, more so than a washer with Twitter.