Reach out and touch me

When I reviewed the X1 Carbon, Lenovo's flagship ThinkPad laptop, I found few faults. It's an eye-catching computer that combines everything good about ThinkPads – great keyboard, sturdy design, solid performance — with a fit and finish I didn't expect from the company's "black box" line of laptops. Its price was a little high and its bloatware portion was heaping, but it was (and still is) one of my favorite Windows 7 ultrabooks.

Now that Windows 8 is here, in all its touch-friendly, colorful glory, Lenovo's released a new X1 Carbon with a touchscreen. The X1 Carbon Touch is otherwise virtually identical to its untouchable sibling: same processor, same operating system, same beautiful matte black carbon fiber body (though a half-pound heavier). It comes at a $150 premium, sort of – the cheapest Carbon model is $1,249 and the cheapest Touch is $1,499, but the Touch's specs match the $1,349 model. I spent some time with the Carbon Touch trying to decide if it's worth the extra weight and the extra price, plus whether or not touchscreens are the future of laptops.

Note: this video is from our original review of the ThinkPad X1 Carbon. Imagine I touch the screen at some point in the video, and something happens, and you'll pretty much get the idea here.

For once, I'm grateful Windows laptops have stickers all over them, because otherwise there's absolutely no way to tell the X1 Carbon Touch from the X1 Carbon. Be sure and read our X1 Carbon review for the full rundown, but here's the quick version: it's one of the best-looking laptops I've ever seen. The wedge-shaped carbon fiber body is sleek, sturdy, and almost soft to the touch. The whole design is impressively minimal: there are Lenovo and ThinkPad logos on the top, and a couple of removable stickers plus another ThinkPad logo in the palmrest (just in case you forgot this is a ThinkPad while you were opening it up), but that's it. The Touch adds an easily-removable Energy Star sticker and removes the two indicator lights from the lid, but I can't say I ever noticed the lights anyway. The TrackPoint and its buttons add the requisite red accents to the inside of the machine, but the overwhelmingly black device still seems like something you'd see Jason Bourne open up in his getaway car.

The Carbon Touch is slightly heavier than its non-touch counterpart — 3.4 pounds, vs. three pounds flat without the touchscreen — and about a credit card thicker. (I say "about a credit card" because it's more than the two pieces of paper I tried, but less than the Smart Cover on my iPad mini.) I noticed only the difference in weight: the X1 Carbon feels remarkably light, where the Touch feels more like a normal ultrabook, but it's still plenty svelte and won't weigh down your backpack or cause you scoliosis.

True to ThinkPad form, the Carbon Touch has a fantastic keyboard. I've always liked the "smile" design of the backlit keys, which curves the bottom of each to leave more room between rows – I can't say for sure, but I swear I make fewer errors on the Carbon than even on the MacBook Air I use every day. I still can't stand that the Fn and Control keys are switched — Control is such an important key on a Windows machine, and I still haven't trained my finger to not look for the outermost key. There also aren't quite as many function keys as I'd like — you can change brightness and control playback using the F1-F12 keys, but not much more — and they're not even the primary use for the keys, so you have to hit Fn and F12 every time you want to go to the next song. 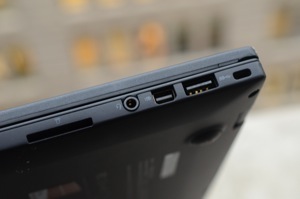 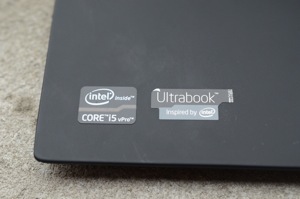 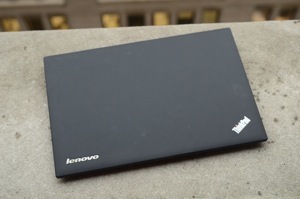 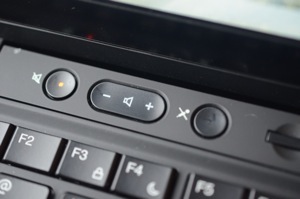 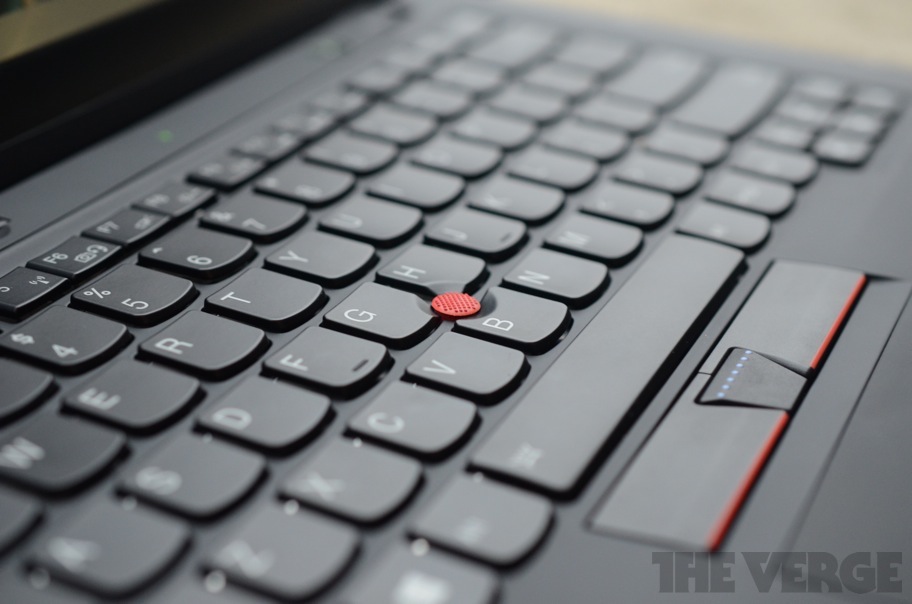 The trackpad is also solid, even better than it was on the original X1 Carbon – the software here is clearly improving. It's smooth and glassy, responsive and easy to use; it doesn't do edge gestures particularly well yet, but everything else works perfectly. My only wish is that it were bigger, using the Yoga 11S's five-button trackpad instead of the separate TrackPoint buttons. The TrackPoint, by the way, is the same as ever: absolutely indispensable for some, but mostly superfluous for trackpad devotees like me.

Technically, the screen is the same on both models as well, a 1600 x 900 matte display that's not as vibrant as most glossy displays, but is far more usable outdoors or in a bright room. The muted colors are more noticeable thanks to Windows 8, which is such a colorful operating system in general, but I'll still take visibility over pop any day. Viewing angles are great from side to side, but tilt the display too far forward or back and the colors start to go haywire. Like X1 Carbon, like X1 Carbon Touch.

Except now, when you touch its screen, something actually happens. Lenovo's added a ten-finger multitouch panel to the Carbon Touch, which makes the whole machine feel more at home running Windows 8. As I've grown more accustomed to the new OS, I've found myself constantly reaching out and touching the screen to do things like connect to a Wi-Fi network or switch between apps; it's not that you can't do these things with a mouse and keyboard, but they're far faster using the touchscreen. This touchscreen works really well, too — it's responsive to gestures and taps, and it handled my epic eight-fingered Fruit Ninja battles with ease. 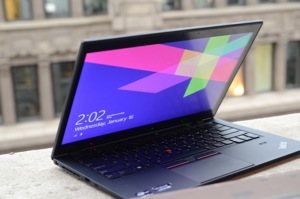 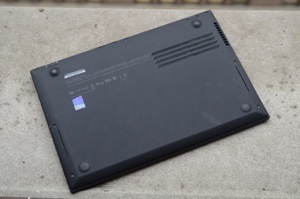 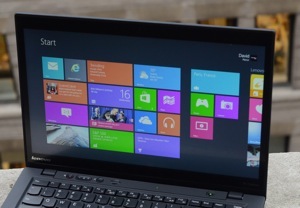 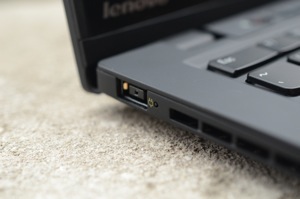 Unfortunately, physics do get in the way a bit. Adding a touchscreen to the Carbon means adding another physical layer between the display and your eye, which has two effects. One, it makes everything feel a little further away, so you feel like you're touching glass rather than whatever's underneath it on the display. Two, the layer adds a slight sheen to the display, a just-noticeable glittery effect that makes everything look a little bit more pixelated.

But all that said, I unequivocally recommend getting a touchscreen on this or any Windows 8 laptop. Not only is it a faster way to navigate in some instances, it just feels more natural — mousing around the big, touch-friendly Start screen is cumbersome and involves a crazy amount of scrolling, or you can just swipe and tap. Some things, like Fruit Ninja, really aren't much fun without touch, and what good is a computer without a good Fruit Ninja experience, really?

Even if you're not planning on using the touchscreen, there's no real harm in getting it other than the extra cost – neither performance nor battery life takes a hit on the X1 Carbon Touch. Windows 8 is a fast operating system in general, and the Carbon Touch easily keeps up; I tested it with a 1.80GHz Core i5-3427U processor, 4GB of RAM, and a 180GB SSD, and had zero problems as I browsed the web, streamed music from Rdio and a couple of movies (like Drive, which I finally got around to watching on Netflix), and generally worked a normal day. No, it's not a gaming machine – it did okay with Borderlands 2 on the lowest possible settings, but fell apart as soon as I cranked it up at all — but you shouldn't be using this for games anyway. The X1 Carbon Touch is pure business.

You also shouldn't use the X1 Carbon Touch on your lap, unless you have some leg hair you're not fond of. Like the X1 Carbon, this machine gets really, really hot — it's both silent and cool while handling normal tasks, but the fan never really kicks into full gear when you're playing a game or streaming six videos at once (a scenario I like to test), and as a result the temperature goes through the roof. I like how quiet the Carbon is, but I don't like having sweaty palms just from touching the machine.

There's still plenty of bloatware on the Carbon Touch, but it's at least better hidden than on the non-touch model. Lenovo bundles a fistful of business-friendly apps into their own section on the Start screen, like Lenovo Companion and Lenovo Support, plus Evernote, Skitch, Skype, and a few others. Upon your first venture to the desktop, you'll be greeted with the friendly nags to upgrade the Norton security suite you probably didn't want in the first place, and a link to the "Lenovo Solution Center." The total package isn't as cluttered here as on the original Carbon — Windows 8 seems to have forced manufacturers to ease back a little, and nothing is as constantly interruptive as the Carbon's software was — but crapware still abounds on the Carbon Touch.

There's no better way to tell Windows 8 is built for speed than to test the Carbon's boot times. The Windows 7-powered X1 Carbon took 27 seconds to boot, and without changing anything but the operating system Lenovo got the Carbon Touch to start in a grand total of eight seconds. Resume time is basically zero in both cases, but I was blown away by how quickly the Carbon Touch got up and running.

As I mentioned, battery life hasn't really changed since the last Carbon model. That's good and bad: good because touchscreen devices can often have shorter battery life, bad because at between 4.5 and 5 hours on a typical charge, battery life wasn't all that good to begin with. Luckily, Lenovo's impressive RapidCharge technology gives you about 50 percent battery in only about 30 minutes — you'll need your charger with you all the time, but at least you won't have to be plugged in for long.

Lenovo got a lot of things right with the ThinkPad X1 Carbon, and all the advantages carry over to the Carbon Touch: it's light, gorgeous, functional, and powerful enough for every realistic ultrabook task. But like the X1 Carbon, the Carbon Touch gets too hot, comes with too much bloatware, and just costs too much. You could spend your $1,500 on an Asus Zenbook Prime and get a better display, or spend it on the MacBook Air. If Lenovo could either improve the battery life or sell the Carbon Touch for about $200 less, buying it would be a no-brainer. But as it is, you're paying a huge premium for the fit and finish of the X1 Carbon Touch, and unless your pockets are deep, that might be hard to justify. I really like the device, but when I have to send back my review unit I don't think I'll be buying one.

I'll say this, though: if you're going to buy the X1 Carbon, buy the touchscreen. As Windows 8 matures, it's going to become even more touch-friendly, and I don't care what Steve Jobs said — touchscreen laptops are awesome. The fingerprints all over my MacBook Air's screen, left as I prodded the display in vain, can attest to that.