Step inside 'Moonrise Kingdom' with this beautiful interactive screenplay

Step inside 'Moonrise Kingdom' with this beautiful interactive screenplay

In last-minute Oscars push, Focus Features pulls back the curtain on New Penzance

With the Academy Awards looming on the horizon, Focus Features this week released a gorgeous online script for Wes Anderson's Moonrise Kingdom. The film doesn't have much at stake at this year's Oscars, having received just one nomination for Best Original Screenplay, but Focus is nevertheless making a strong push for its candidate, with an online feature almost as delightful as the movie itself.

Written by Anderson and Roman Coppola, the actual Moonrise screenplay comprises but a small part of Focus' online version. Peppered in among the dialogue and stage directions are film stills, production drawings, artwork, and storyboards, giving viewers a glimpse into Anderson's famously quirky creative process.

Such stylized promotion has been a part of Moonrise's DNA from the very beginning. Prior to the film's release last spring, Focus launched a media-rich interactive website, replete with a full map of New Penzance, voiceover narration, and set photos of "the best cast ever." It remains unclear, however, whether the studio's campaign will result in Oscar gold, especially considering the stiff competition Moonrise faces this year. Also nominated for best screenplay are Kathryn Bigelow's Zero Dark Thirty and Quentin Tarantino's Django Unchained, which won the Golden Globe on Sunday. 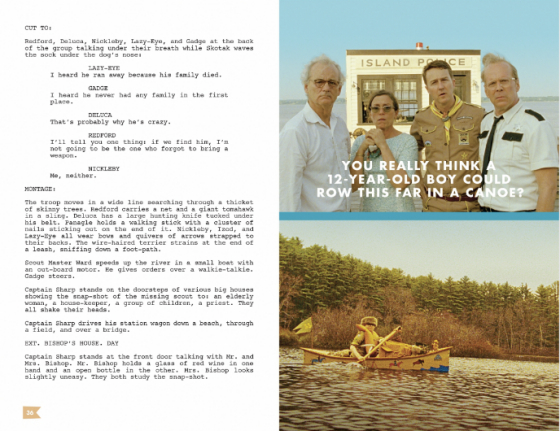