For most people, the strength of a Wi-Fi signal is nothing more than a number — an isolated, and entirely utilitarian metric. But for Austrian artist and architect Peter Jellitsch, this data point is part of a larger set of invisible forces silently enveloping us. It's this invisible, "fragmented space" that Jellitsch strove to capture in his latest work, "Bleecker Street Documents."

Named after an apartment where the artist stayed during a 45-day residence in New York last year, the installation is equal parts sculpture, diary, and data visualization. Every day during his stay, Jellitsch would measure and record the strength of the wireless signal in his apartment, charting each data point in chronological order across a flat white plane. When the signal was strong, he would raise the part of the plane for that particular day, leaving it flat for those days when the signal was weak. The resulting sculpture, pictured above, is a craggy, mountain-like 3D model of the silent forces that surrounded Pellitsch during his sojourn.

New dimensions for a new environment

But the sculpture is only one part of "Bleecker Street Documents." Also included in the installation are the notes Jellitsch took while creating the piece, as well as a scientific primer on radio waves and WLAN signals. These three elements are meant to be displayed together to complete the full installation — "art by triangulation," as Fast Company aptly describes it.

For Jellitsch, "Bleecker Street Documents" represents not only a visualization of the unseen, but a new architectural framework for the 21st century. "For me, it is no longer necessary for architects to think in measurements such as meter, kilometer, or decibel anymore," Jellitsch said in an interview with BITE earlier this year. "Kilowatt, hertz, and terabyte are the emerging dimensions for our environment today." 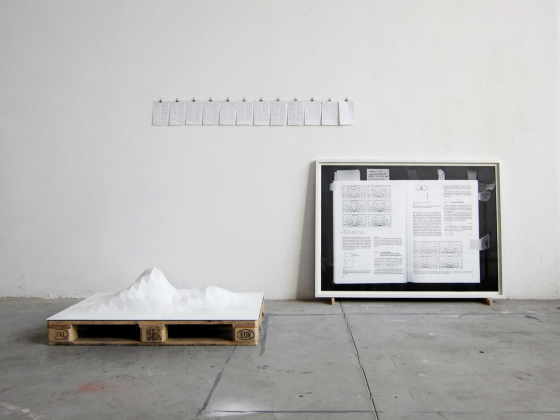