We already knew Verizon was committed to backing BlackBerry 10, but now we're seeing further evidence that the Z10 will be announced for the biggest US carrier soon. @evleaks has just released a small screenshot on Twitter of a Verizon promo site for "the new BlackBerry Z10," with a spot to sign up for more information. The image is tiny, so it is hard to make out the exact details on the page, but it shows the Z10 in all its touchscreen glory with the Verizon logo emblazoned on its white back — the first time we've seen the phone in such a color. The image also further affirms that the first BlackBerry 10 devices will be touchscreen-only, with the keyboard models coming later down the line. We should have all the details in a week and a half when RIM finally takes the cover off of BlackBerry 10. 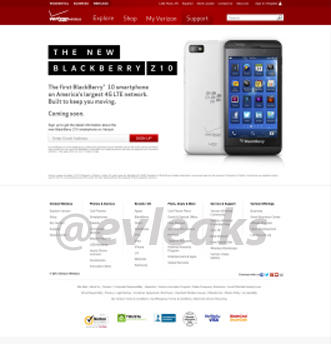