Ahead of President Obama's inauguration, Twitter announces new statistics on adoption rates among US lawmakers

It can be easy to criticize US lawmakers for failing to grasp the nuances of internet legislation, but when it comes to Twitter, at least, Congress seems to be on top of its game. According to the social network, all 100 US Senators are now active users on Twitter, as are 90 percent (398) of all members of the House of Representatives. This represents a significant jump from 2011, when active Twitter users comprised just 44 percent of the Senate and 38 percent of the House. As of now, 29 states have their full delegation on the microblogging platform — including both senators and representatives — with adoption rates falling no lower than 70 percent within a single state (see the map, embedded below).

Announced just a few days before President Barack Obama's inauguration on Monday, these statistics also coincide with Michelle Obama's inaugural tweet. On Friday, the First Lady officially joined Twitter, where she and her team will be posting "updates and pics" under the @FLOTUS handle. Thus far, Mrs. Obama has garnered more than 124,000 followers, after opening her account with a campaign for National Service Day.

There are also several accounts dedicated to Monday's inauguration, including @SecretService, @ObamaInaugural, and @MetroInaug, among others, where users can receive news and updates from the event as it unfolds. 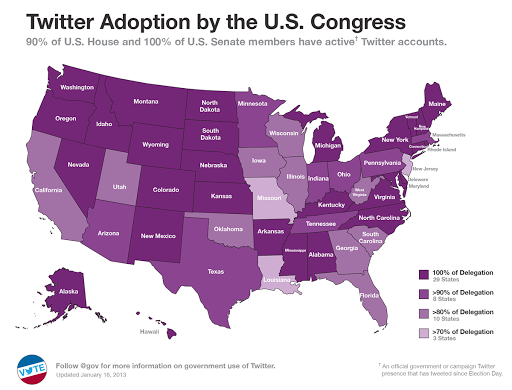