HTC is rumored to have a flagship phone called the M7 waiting in the wings, and we published the first alleged image courtesy of the oft-reliable @evleaks last week. Since then, a contradictory render surfaced at PocketNow that was produced by someone who claimed to have seen an image of the phone, and now Android Police has a matching photo itself. As you can see, it bears little resemblance to the "M7" in the previously leaked image — either this is a different handset, or one (or both) of the pictures are fake.

HTC appears to have switched the Home and Multitasking buttons around

That said, the new photos certainly look like something, and come with some details worthy of note. The device's industrial design isn't breaking much new ground for HTC, coming across as reminiscent of the Droid DNA. Unusually, though, HTC appears to have switched the Home and multitasking buttons around so that the former is on the lower right of the device — a non-standard location for Android devices to say the least, and one that could leave many users scratching their heads. 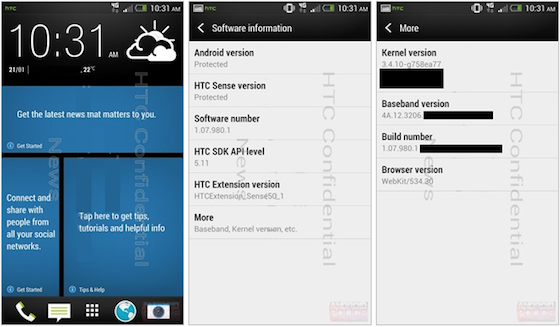 The phone also appears to be running all-new software that Android Police's tipster says is Sense 5.0, the latest version of HTC's much-maligned Android skin. Both Sense version and Android version are listed as "protected" in the system settings screenshots provided, but if this is the real deal it looks like it could be a major shift for HTC. The weather widget has been overhauled with simple black-and-white iconography, for example, eschewing the bright colors of previous Sense skins. The time on the widget says 10.31am on January 21st, suggesting that the pictures were taken very recently somewhere in Asia — just under a couple of hours ago, if in HTC's home country of Taiwan.

Otherwise there's not a lot to ascertain from this supposed leak, but we're expecting to learn more about HTC's hardware and software plans at Mobile World Congress in just over a month's time.

More from this stream HTC One: What we know prior to the February 19th launch