We're just over a week away from RIM's big BlackBerry 10 launch event, and leaks of the new devices and operating system are coming fast and furious. The latest leak to hit the internet is a batch of 100 screenshots of the new BlackBerry 10 platform, posted by BGR. The images detail everything from the setup of a new BlackBerry 10 device, to the settings menus, to the new home screens, to RIM's Siri-like voice control system. Unfortunately, the leaked images don't give us any more clues as to what unannounced apps will be available at launch, nor do they show us what it will be like to actually use the operating system once it's loaded with accounts and data.

RIM's hosting a major, multi-city event on January 30th to finally unveil the new platform and its first devices to go along with it. It is expected to announced carrier partnerships and pricing as well, and all four major carriers in the US have already pledged to support the new platform once it is available. BGR's anonymous sources say pricing for the new devices will be lower than the usual $199 on-contract price that we see for most high-end smartphones these days, so it will be interesting to see how RIM decides to price the first BlackBerry 10 smartphones. Either way, we'll be there in full force to to cover RIM's big unveil. 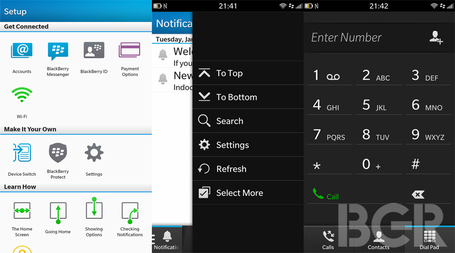