Verizon just announced its financial results for Q4 2012, revealing an 8.4 percent year-over-year increase in retail revenue. The wireless carrier added what it calls a "record-high" of 2.1 million new postpaid subscribers over the quarter, and now has 98.2 million retail customers in total. Verizon users are opting for smartphones now more than ever: more than 58 percent of its postpaid subscribers now have smartphones, up from 53 percent last quarter. Overall, the company activated some 9.8 million smartphones, and 87 percent of the carrier's postpaid sales were smartphones.

With the increase of smartphones comes a similar uptick in LTE compatibility, and Verizon reports that 23.3 percent of its customers now have devices capable of accessing its next-generation network, up from 16.5 percent last quarter, adding that 273 million people (over 88 percent of the population) now live in LTE-enabled markets. Overall, the company sold 7.3 million LTE-enabled devices in the quarter, and nearly 50 percent of Verizon's total data traffic runs on its LTE network. All these smartphone accounts helped to drive an increase in average revenue per account (ARPA) — Verizon says ARPA is up 6.6 percent year-over-year to $146.80 per month. That's up slightly from the $145.42 Verizon posted last quarter.

Verizon's FiOS Wireline business added 144,000 internet and 134,000 video subscribers, down significantly year-over-year, but still moving in the right direction. It wasn't all good news for Verizon, though: the cost of repairing infrastructure battered by Hurricane Sandy took its toll on the company, resulting in a seven-cent decrease in earnings-per-share, while mounting pension liabilities slashed earnings by a massive $1.55 per share. Adjusted losses for the quarter totaled $4.23 billion, but over 2012 in its entirety Verizon managed to make $875 million. The carrier will be holding a conference call this morning to give more details on its quarterly performance. During the call we expect to hear specifics on iPhone sales — this is the first full quarter since Apple released the iPhone 5 — and we'll update this post with any take-outs.

Update: Verizon CFO Fran Shammo is hosting Verizon's quarterly conference call to discuss the carrier's results, and as usual we just heard some details on iPhone and Android sales. Out of Verizon's 9.8 million new smartphone activations, 6.2 million were iPhones. Out of those, Shammo said that "almost half" were running on Verizon's LTE network — that means that the majority of iPhones sold at Verizon were not Apple's latest model, but instead older iPhone 4 and 4S models. As for the remainder of smartphone sales, Shammo said that the majority were Android devices.

When talked about how phone subsidies would affect Verizon's bottom line, Shammo took the opportunity to mention Windows Phone for the first time on the call. "We now have the Windows platform in our mix," Shammo said, "and we saw some steady albeit slow increase in some of the uptake of that platform." RIM's reinvention was also a topic of discussion: Shammo mentioned Verizon's "very loyal BlackBerry users in our base," and also said that with four platforms available on the carrier, "more choice for our customers is better for us and for the consumer and for competition."

Update 2: Horace Dediu at Asymco just posted a simple but revealing graph showing the trajectory of iPhone sales at Verizon — it's rather shocking when you see what a big quarter Apple had. Essentially, Apple sold nearly the same amount of iPhone 4 and 4S handsets in Q4 as it did in Q3, and added some three million iPhone 5 devices on top of it. We'll find out how many iPhones Apple sold in total tomorrow, and we'll hear from AT&T on Thursday, but we're guessing that Apple did just fine last quarter. There's also a look at the entire history of iPhone activations by US carrier below — we'll be looking to see what this trend is like once all three carriers report their earnings. 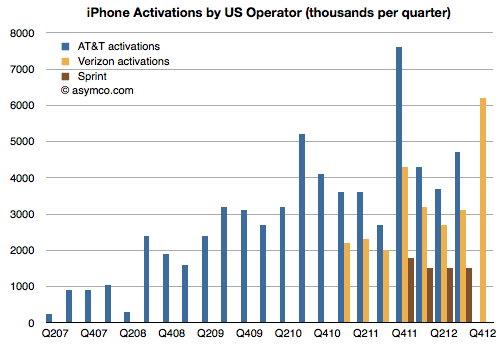 Nathan Ingraham contributed to this report.