Google just announced earnings for Q4 2012, and the company had another strong quarter. The company earned $14.4 billion in revenue, up 36 percent over last year. $5.99 billion of that revenue came from the US, with the remaining from international markets. Motorola Mobility revenues worked out to $1.51 billion, or 11 percent of total revenue for the quarter. Still, Motorola Mobility posted an operating loss of $353 million. Overall, Google pulled in $2.89 billion in net income, up slightly over the $2.71 billion the company pulled in during Q4 of 2011.

From a more detailed revenue breakdown perspective, Google "advertising and other" revenues made up $12.91 billion, a 22 percent year-over-year increase. Google-owned sites specifically made up $8.64 billion in revenue, and Google Network (partner sites) revenue was $3.44 billion. Those were up 18 and 19 percent year-over-year, respectively. Cost-per-click, which measures the cost of clicks related to ads served on Google's sites as well as network sites, decreased six percent year-over-year, but was up two percent over last quarter. Aggregate paid clicks, which measures clicks to ads on Google and Google network sites were up 24 percent over Q4 2011 and up nine percent over last quarter. 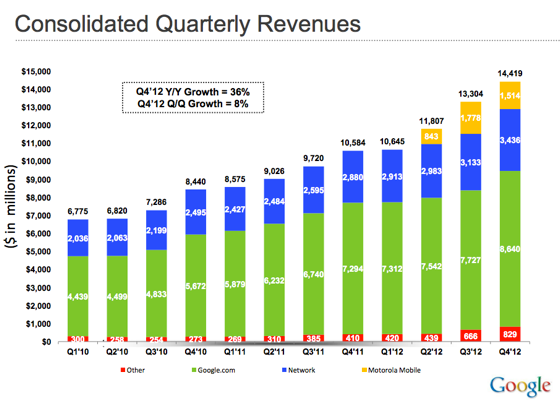 It's worth noting that Google is reporting results a little differently this quarter — as a result of its sale of the Motorola Home business, Google must now split net income from its core businesses out from the Motorola Home results. It's doing the same for past results in Q2 and Q3, as well. Including the Motorola Home business, consolidated revenues would have been $15.2 billion — a 44 percent gain year-over-year, before Google owned Motorola. If you excluded all Motorola revenue, both Home and Mobility, Google's revenue would be $12.89 billion.

Google will be hosting its quarterly earnings call at 4:30pm ET — we'll be listening in and will update this post with any news that comes out of the call.

Update: Larry Page is on the call giving an update on Google's products, and while talking about the Nexus lineup he just re-confirmed the supply issues that Google has had. "Clearly there's work to be done managing our supply better, and that is priority to our teams," Page said.