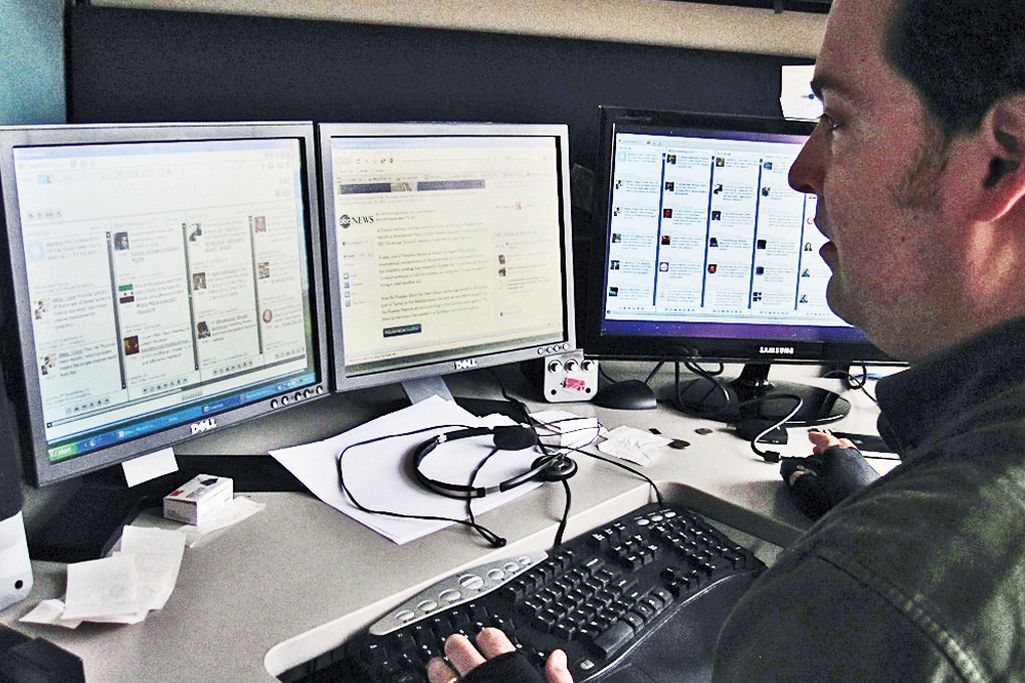 Andy Carvin’s official title is Senior Strategist, Social Media Desk at NPR, but that bureaucratic fog undercuts the scale of his work. More emphatically, The Columbia Journalism Review has called him a "living, breathing real-time verification system," while The Washington Post declared him “a one-man Twitter news bureau.” The Guardian described him as "the man who tweets revolutions," while The Daily Dot labeled him “Edward R. Murrow 2.0,” referencing the World War II-era radio broadcaster often cited as one of journalism’s most inspiring figures. Whatever @acarvin’s doing, it has many observers reaching for superlatives.

Fundamentally what he’s doing is quite simple: he tweets, and he retweets. A lot. Sometimes he goes 20 hours at a stretch, collating from those he follows and passing information on to his eighty thousand followers. He often interjects questions or critiques, building on what he’s read and recruiting fact-checkers. The result can be simultaneously cacophonous, intimate, and illuminating.

He developed his technique during the Arab Spring, as mass demonstrations convulsed first Tunisia, then quickly spread to Egypt, Libya, Yemen, Syria, Bahrain, and others. His new book, Distant Witness: Social Media, the Arab Spring and a Journalism Revolution, chronicles how he became enthralled by Twitter reports from the front lines of those revolutions happening half a world away. Via email we discussed Twitter's evolving role in journalism, the potential for social media to support revolutions, and just what it means to feel connected to people you’ve never actually met. 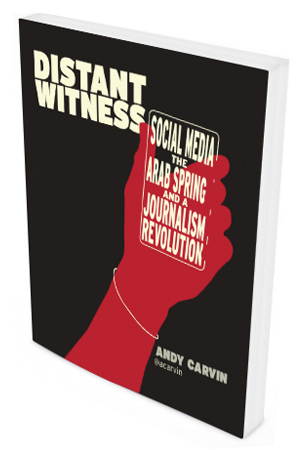 In the book you describe yourself as a"journalistic test pilot — I take new reporting methods for a spin, and see if they soar or crash." You regularly have new followers ask what you're doing. So, how do you describe what you do, beyond test piloting? What's the thinking behind your method?

I still haven't come up with a satisfactory way of describing it. There's that word "curator" that gets used so often, but to me that seems to suggest archiving information rather than analyzing it in real time. I've sometimes joked about myself as a real-time oral historian or a news DJ, but those don't suffice either. Probably the best way to describe what I do most of the time is serve a function similar to a news anchor. I process news in real time and try to share the most interesting bits with my Twitter followers. But I don't see them as just my followers — they help me research, translate, etc. So I guess I'm like an online news anchor who uses Twitter as his newsroom, with Twitter followers helping me do my job better.

Jeff Jarvis writes in the introduction that "we journalists think of ourselves first and foremost as storytellers," going on to suggest that your work takes a different form — it's not poured into conventional narrative forms. The way you describe it sounds almost like a communal fact-checking, debunking and confirming while, as you say, feeling "through the smog to find the truth." Are these visions of journalism — storyteller versus fact accumulator — compatible?

Actually, I see myself as a storyteller, but one who doesn't work in traditional story form structures. For people who've followed me on Twitter, they've gotten to know many of the people I tweet about as characters in a broader Arab Spring narrative. You see their ups and downs, the hopes fulfilled and their dreams dashed. But because it's happening over twitter, you're not experiencing these stories in the past tense. You're experiencing them in the present – as present as you can get. And my characters are real people, whether they use their real names or are forced to use pseudonyms for their own safety. 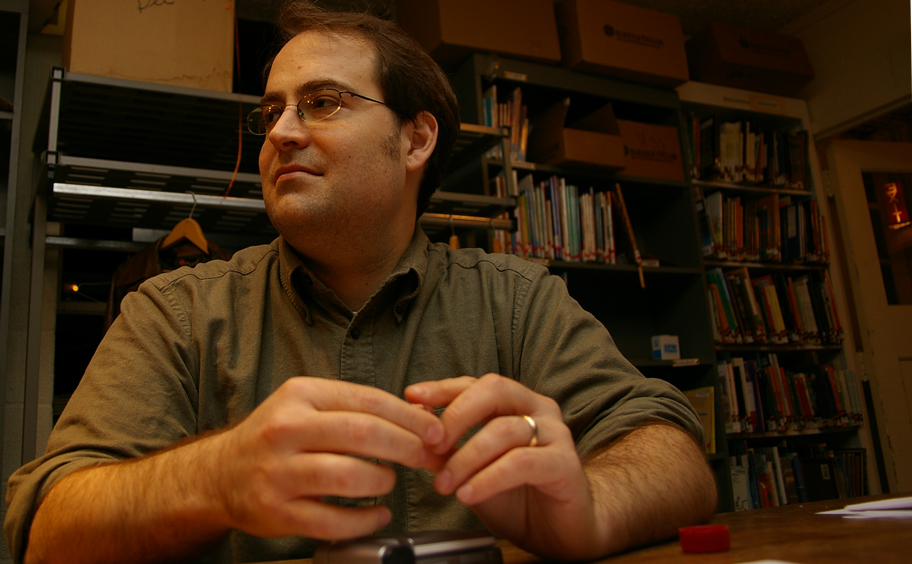 The Arab Spring was a truly unprecedented series of revolutions, spreading from Tunisia to Egypt, through Bahrain, Libya, Yemen, and Syria. These weren't Twitter revolutions: people had to put their bodies on the line, and many people suffered and died to make change possible. Social media did have an effect, though, helping recruit would-be protesters and keep them connected. Yet while protesters in Egypt and Tunisia, for example, had an advantage in their technological savvy, that wasn't the case in Bahrain, where pro-regime citizens were just as vocal on social media. What other kinds of differences did you see among the countries?

Bahrain was very different than the other revolutions because the government is very tech savvy, and the vast majority of the population is online. That means people both for and against the government have their say in online discourse, and both can use the same online organizing techniques to rally the troops, as it were. For example, there were pro-government Facebook pages that identified Bahraini dissidents and encouraged the public to turn them in – or worse.

Both Libya and Yemen were different than Tunisia and Egypt, because both of those countries had much less Internet access. You didn't really see them being used to spread the word about new protests in the same way the other North African countries did. What you did see, though, was a lot of video. Those people who managed to stay online worked with others to capture footage and upload it, or even stream it live. In the case of Libya, I think live streams like the one created by Mohammed Nabbous probably played a role in shifting public opinion towards military intervention.

You mention the very real connection you felt to Arab Spring activists half a world away; Boing Boing's Xeni Jardin tweeted that "The nature of your connection to [a Libyan activist killed during his reporting] is something we don't have language for yet. But it was important." Do you think that connection was particular to the events, a sense of camaraderie formed in the crucible, or something that could happen any time via social media? How might we make it happen more often?

I think it was a combination of factors at play: a charismatic citizen journalist who dedicated his life to documenting what was happening in Libya; an assortment of fans and volunteers who helped him do his work and spread it to news outlets; and the way that he interacted with all of them in real time. Almost none of us got to meet him in person, but we all got to know him in that crucible, which made his death all the harder to process. I know others who also died, but sometimes our connections were more indirect and less real time. I took their deaths hard, of course, but not with the same level of visceral grief and anger I experienced that awful day . 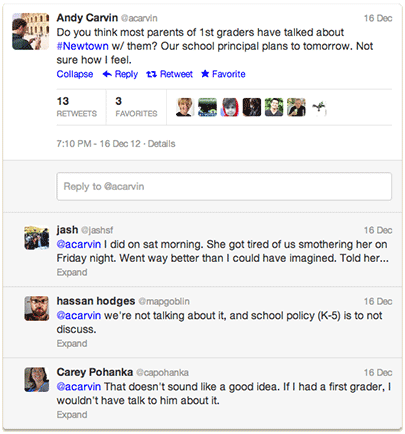 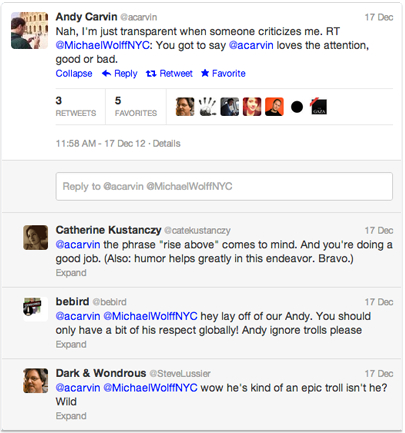 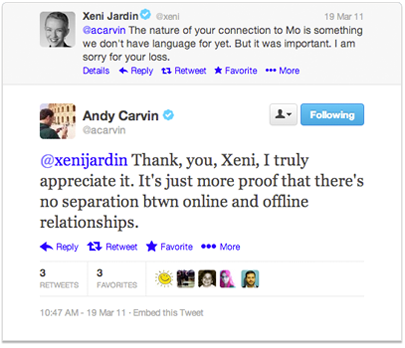 Michael Wolff recently criticized your method in retweeting the wake of the Sandy Hook shooting, an event that seemed to provoke a remarkable amount of bad information, including a Facebook profile allegedly belonging to the shooter. In the wake of that accusation and the subsequent death threats he received, it seems a little cavalier to suggest that social media are self-correcting — that good information will eventually push out bad, and the truth will out. Wolff's critique seems to be that there's a blurry line between trying to confirm or debunk rumors and spreading those same rumors. What do you think of his analysis? And are some events better suited than others for this kind of reporting?

I think he doesn't understand what I do or how I do it. I actually posted a reply to him, going paragraph by paragraph through his accusations.

For example, when I supposedly spread that Facebook page, I was actually pointing out that the guy who was being cited in the media as the shooter was using his facebook page to say he had nothing to do with it. And when he accuses me of spreading a fake letter supposedly written by a student in the classroom, the tweet I sent out was asking my Twitter followers to help debunk it – which they did.

I think there are definitely questions worth raising about my work, such as what happens when a person sees a tweet of mine out of context. If you follow me, you'll see how my process unfolds, but a single tweet might be confusing. I don't have a good answer to that yet. Same thing with people who just start to follow me. My methods are unusual, so I probably should create a FAQ guide or something for new followers to get the basics of what I do and why.

And yes, Twitter can spread rumors far and wide; he's right about that. In this case, every rumor he accused me of spreading originated with mainstream media, and I only referenced them in the context of asking my followers if they were true. I'll let readers judge for themselves, but I think Wolff's argument falls apart if you take the time to see what I've doing, which I've also archived for people to scrutinize:

What do you think average citizens — who may not see themselves as would-be journalists, but still want to understand the world — can learn from the way you use Twitter?

Two points. First, in many ways, I see the meta-narrative of my online work as a type of ad hoc media literacy course. Too much of journalism happens behind the scenes. We don't see how the sausage is made, so we don't know what editorial decisions reporters make. I think people become more informed citizens when they understand the processes of journalism, not just the products of journalism. By following me, they get to see the processes in action – and hopefully they get something from the experience.

Second, I really go out of my way to amplify the stories of people around the world who are using social media to document their experiences and emotions. By connecting my followers to these people, I hope it humanizes them, even if my followers know little about their culture, religion or history. All too often, we see protesters or rebels as just a person carrying a sign or a gun, but we don't know what motivates them and what they hope to accomplish. By connecting my followers with them, I hope they get to see the world through their eyes, even if it's just for a few moments.


Photo of at his desk Andy Carvin: Mike Janssen/Current.org)