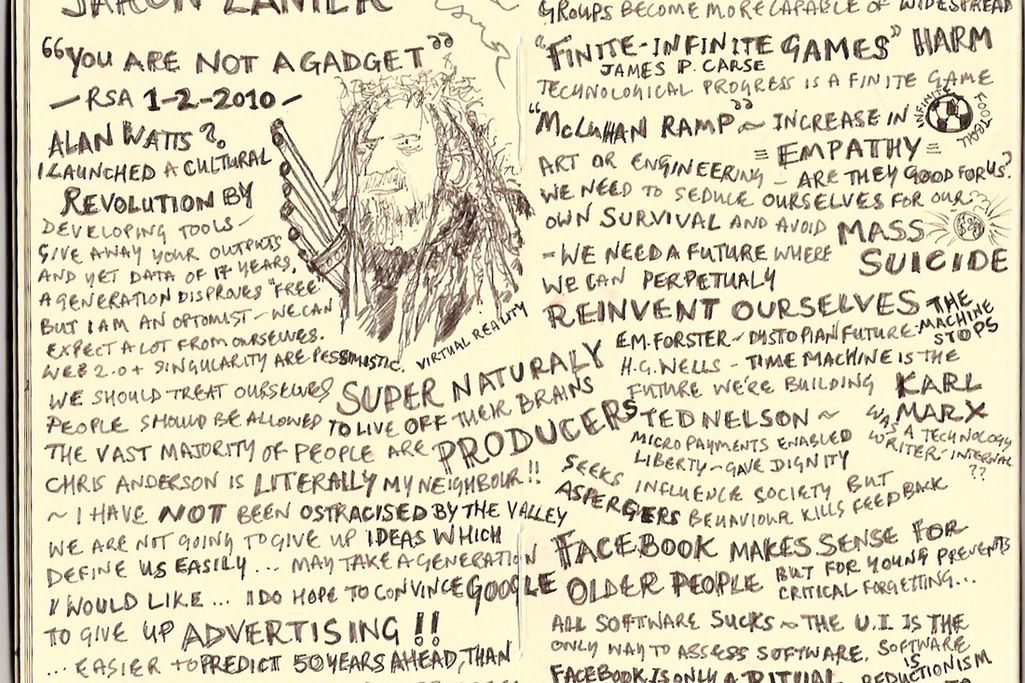 Every few years, one of my friends from the early days of digital enthusiasm turns up on the media’s radar as a “defector.” Huzzah! The former advocate or progenitor of the Next New Thing has turned into a flaming critic. Perhaps he or she has even issued a jeremiad against the former Great Hope of All Humanity. It’s a turnkey, media-ready narrative, easy to convey and easy for a low-attention reading public to digest: He was for it. Now he’s agin’ it. You can tweet that and have enough characters left over for a haiku.

Jaron Lanier, who emerged into the media spotlight in the early ’90s as the chief spokesperson for Virtual Reality, seems to be having a longer — and more vocal — run at this sort of thing than most. In “Half A Manifesto,” published in Wired (2000), Lanier struck out against what he saw as a cybernetic totalism wherein some techno enthusiasts were laboring to create our nonbiological replacement species. You Are Not A Gadget (2011) went a bit further into “fighting the future,” exploring the ways in which Web 2.0 disruption depersonalized or was economically unfair to “creatives.” The latest chapter of this saga, “What Turned Jaron Lanier Against the Web,” is the much-ballyhooed portrait by Ron Rosenbaum for Smithsonian Magazine that portrays Jaron as being like a “spy who came in from the cold.” 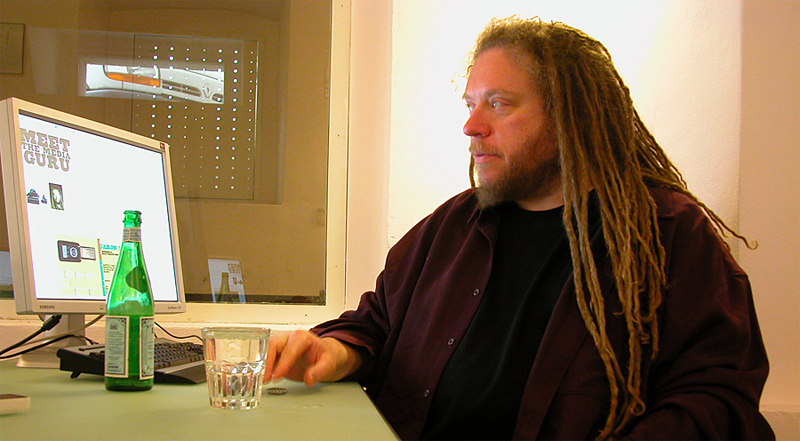 I partly agree with every point that Jaron Lanier makes in the Smithsonian article… with the emphasis on partly. But there is one place where I stand, politically, in opposition to Lanier’s implicit stance: that whole “information wants to be free” thing.

I asked him if there was a single development that gave rise to his defection.

“I’d had a career as a professional musician and what I started to see is that once we made information free, it wasn’t that we consigned all the big stars to the bread lines.” (They still had mega-concert tour profits.)

“Instead, it was the middle-class people who were consigned to the bread lines. And that was a very large body of people. And all of a sudden there was this weekly ritual, sometimes even daily: ‘Oh, we need to organize a benefit because so and so who’d been a manager of this big studio that closed its doors has cancer and doesn’t have insurance. We need to raise money so he can have his operation.’

“And I realized this was a hopeless, stupid design of society and that it was our fault. It really hit on a personal level—this isn’t working. And I think you can draw an analogy to what happened with communism, where at some point you just have to say there’s too much wrong with these experiments.”

In a nutshell, either Jaron just wants to express his dissatisfaction with people taking cultural stuff for free, or he thinks he can convince people that it’s the ethical thing to do to stop all this P2P sharing. I think P2P sharing is a natural and friendly act that should be honored, and that the digitization, availability, and replicability of cultural wealth represents the onset of a crisis in late capitalism that simply won’t get resolved without broad systemic reform.

“Free culture,” as some call it, is not economically kind to artists, musicians, writers, and creative folks in general. Almost all cultural product today is digital, infinitely replicable and instantly available to everyone with web access. This tends to devalue and demean creative types as we’re pushed down into the shit end of the Long Tail alongside the vast, relatively unskilled hordes who are happy to provide their own content, thank you very much, and to grab up our stuff for free. The creative middle class is effectively being removed from the supply chain. It’s being disintermediated.

Despite my immediate self interests, I stand on the side of those who want information to be free, who oppose the creation of false scarcity. Back in the early days of new media — I met Jaron back in 1987 or ‘88 — we contemplated ideas like Free Culture as future probabilities instead of new (complicated and convoluted) realities. We were both younger then, and perhaps more resilient. I can’t speak for him, but I think it’s fair to say that there was a broad feeling amongst those of us at play in the fields of the arising tech revolution that if the anarchic shockwaves of shifting social relations brought about by — among other things — the digitization of cultural stuff and the resultant ease with which that stuff could be copied unto infinity and accessed from anywhere hit us, then we would happily surf those crazy waves of change.

The other part of that deal, as many of us perceived it, was that everything else had to change too. We knew that the end of scarcity in the digital realm would be “heightening the contradictions” (as they say) in the industrial capitalist model. We assumed that either capitalism would rise to the challenge by finding ways to support those disintermediated or displaced by technical change — or it would be forcibly altered or dissipated in the forward rush of boundary defying technologies.

We’re now experiencing the change we once contemplated. While there’s certainly a surfeit of free culture, there’s also this middle terrain best represented by iTunes. By offering convenience and legitimacy (and by being extremely well advertised) those old school turnstiles are resurrected and money is exchanged. In this distribution model, culture workers are not removed from the equation, but they are devalued. This only serves to cloud the discussion by offering the almost entirely false premise that creative professionals can still make a reasonable livelihood off of their digitized stuff.

The big question is whether there is an economic place in the world for the cultural professionals — for the musician, the writer, etcetera. It seems to me that there is, down there with the hobbyists at the shit end of the Long Tail. In Chris Anderson’s glib happyland, everybody gets to bring his or her game to a nearly infinite market. In reality, that Long Tail is populated almost entirely by people who either don’t need to — or simply don’t — make anything like a reasonable livelihood from their efforts.

Why should this matter to you? Well, aside from the fact that everybody’s salable skill will eventually get disintermediated, automated, or both, it shouldn’t. There is no intrinsic entitlement to a middle class life for creative workers — or for anyone — written into the cosmos.

On the other hand, there’s no intrinsic entitlement to free access to the products of cultural creativity written into the cosmos either. All of these tendencies come about (or don’t) as the result of where the technology takes us, within the context of the type of society in which those technologies grow, and with the additional and important possible directional thrust that might occur as we negotiate what’s fair and, if warranted, actually make those societies change. And this finally is where the shouting over the P2P exchange of digital stuff versus the interests of the creator to gather a livelihood needs a contextual shift. 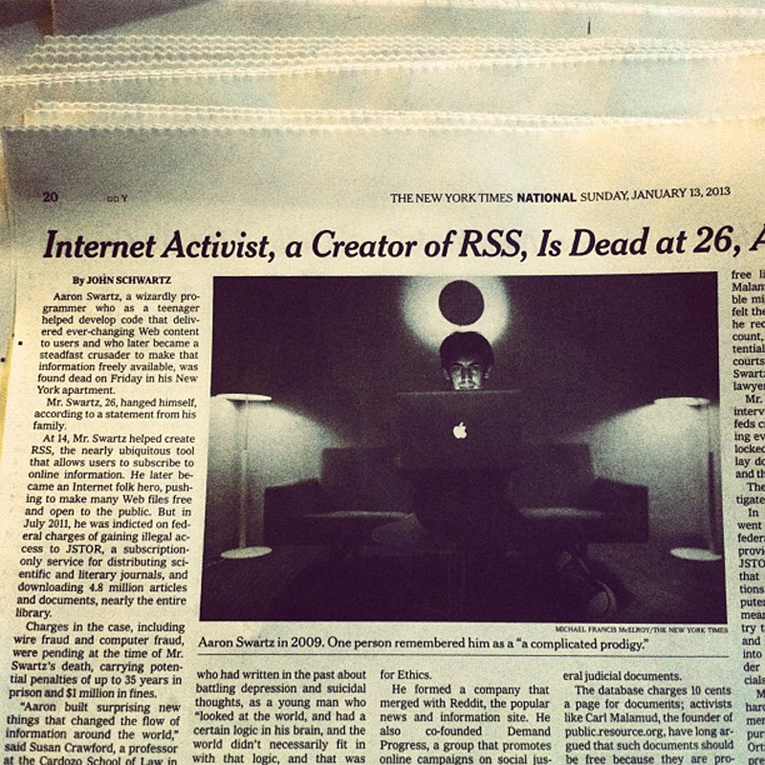 Apparently, it was the economic marginalization of creatives in the age of free culture that pushed Jaron Lanier into this dark and foreboding mood. This is an understandable reaction to both the destabilizing effect of digital technology on society and the stress of living in an economic pressure cooker that’s about to blow. Unfortunately, the thing that needs to be targeted is the tendencies and policies that make for such economic pressure and not the natural urge that people feel to share stuff that can so easily be shared. And that’s going to require a radical change in our economic and political discourse. That may be a long shot, but it’s a better shot than trying to put the Free Culture genie back in the bottle. That ain’t gonna happen… and it shouldn’t.

This story took a darker turn a few days after I finished my first pass at it, when I learned about the suicide of Aaron Swartz. The hacker and free information activist faced a possible 30 years in prison for “liberating” several million academic journal articles from JSTOR, a paid subscription repository for digitized academic journals.

The free access to academic journals goes to the heart of the most idealistic intentions of free information advocates, as it has been understood since the earliest days of hacker ethics. This is the idea that hoarding information does harm to humanity. Progress is best made when other explorers can access the latest ideas and discoveries and build on them. Conversely, not having access to the discoveries and insights of others leads to wasted time, money and effort. That the information provided by researchers to academic journals might be valuable to others working in similar fields seems pretty obvious. Getting the latest Beyoncé album for free is not really the same thing, except by the broadest interpretation in which all signals are understood to contain information that, therefore, could be useful. Anyway, once you establish the principle of free information, any attempt to limit that principle to the sort of information that conforms to the values of the original idealists leads us inexorably into a near-infinite fog of subjective valuation.

Aaron Swartz is, in some sense, a victim of the disconnect that this essay has tried to illustrate. The idealism at the heart of digital free culture exists in a kind of isolation. It is not reflected and supported by other types of idealism around property — intellectual or otherwise — and the distribution of wealth. The federal prosecutors in the Swartz case represent the sort of hard-ass, legalistic, economic concerns that surrounds digital idealism like a school of sharks that senses the potential for an oncoming feeding crisis.

To some extent, both Jaron Lanier’s turn against ”free culture” and the insane, heavy-handed prosecution of Aaron Swartz stem from an inability to come to terms with the reality that in the digital age, it’s easy to share stuff for free with everybody, but people still want and need money. The larger tragedy is that lots of people (not just middle class creative professions) will eventually be rendered economically superfluous. The hope is that this will result in a critical mass of folks demanding a solution. The solution, which seemed obvious to people when they discussed the coming “cybernetic revolution” in the 1970s, is to find a way to (or an excuse to) distribute wealth to those rendered economically obsolete. This notion has been rendered taboo by a decades-long reactionary campaign to instill a visceral horrified response to any claims that displaced people should be “entitled” to anything. But this is a big subject that requires another essay questioning the legitimacy of a whole series of political and economic paradigms, so I’ll have to leave it there for now.

In the meantime, I’m convinced that with the slightest loosening of the economic pressure cooker — and even better, a modicum of slack — this techno-juggernaut will start to look again like the marvelous garden of intriguing possibilities that it did to some of us back in the day, when we enthused and dreamed an expansive and delightful future.

R.U. Sirius was editor-in-chief of Mondo 2000 and a columnist for San Francisco Examiner and Artforum International. He has authored or coauthored numerous books, including Mondo 2000: A User’s Guide to the New Edge, Design for Dying (with Timothy Leary) and Counterculture Through the Ages. He is currently working on Use Your Hallucinations: The Making of Mondo 2000 in Late 20th Century Cyberculture.