After losing his office job a few years ago, David Beattie decided to pursue his true passion: slot car racing. He began by building models in his garage, and eventually founded his own company, Slot Mods USA. Last year, Beattie teamed up with Audi to create an enormous, interactive slot car track in Toronto as part of a promotion for the company's Quattro A4 sedan. Originally housed within a transparent shipping container, Beattie's model is no longer on public display, but its creation is the subject of a fascinating short film called Painting Coconuts.

Produced by Supplemental Films, Painting Coconuts interweaves Beattie's personal story with the meticulous construction of Audi's model. When the manufacturer first approached them with the project, Beattie and his team set about creating miniature 3D-printed models of the Quattro A4, on a 1:32 scale. The track itself, meanwhile, was constructed with painstaking attention to detail, with every tree crafted from Japanese Sedum flowers and every figure hand-carved.

At Audi Canada's request, the team also had to incorporate an iPad to control the speed of their model cars, which posed a particularly steep challenge. The idea was to allow spectators to drive the model Audis using a custom iPad, and to give them a "behind-the-wheel" view of the car's path. As a result, Beattie's team had to delicately situate small POV cameras within every car, and connect them to iPads using custom circuits.

Eventually, it all came together in a beautiful exhibition, though what's most memorable about the film isn't the actual construction, but Beattie's undeniable passion for his craft. For him, building slot car models isn't just a hobby, but a way to re-connect with a forgotten art form — a way of telling people, "Hey look, this still exists, this is still fun. Let's race."

And despite all the hours and manual labor, Beattie says that building slot car tracks is an exercise that transcends the physical. "It's more mystical than just tools and hammers," he said, his voice swelling with emotion. "It's more the passion. And that's what drives me." 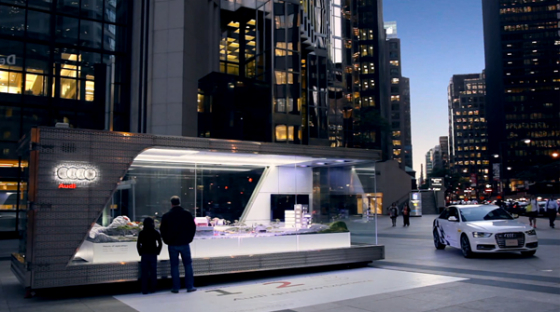