Question and answer site Quora just announced a new feature that represents a significant shift for the startup: blogs. In addition to posing and responding to questions, users can now start their own blogs on Quora. The site is a powerful distribution system for bloggers, Quora's Marc Bodnick said, because blog posts will be included when users search questions, look at a topic page, or scan their personalized feeds. "There is still the same potential for viral distribution that you have for Q and A," he told The Verge.

If you write a post about Zero Dark Thirty and tag it with the rather broad topic "movies," it will be shown to users who follow those topics, he explained.

Quora caught our attention when it first launched for two reasons: rich blood and a worthy mission. The site was founded by early Facebook alumni, including former CTO Adam D'Angelo, who Mark Zuckerberg reportedly called one of the "six people in the world who have decent ideas." Its mission was to be the high-quality version of Yahoo Answers by enforcing real-name identities, using a complex user-voting system to promote better answers, and seeding the site with Silicon Valley insiders who contributed high-minded, articulate posts (which often contained juicy insider intel). At first, the site was closed to search engines. After its public debut, Quora's popularity boomed.

Slowly, the startup pivoted away from its original goal to a fuzzier one

Slowly, the startup pivoted away from its original goal to a fuzzier one: "an internet-scale Library of Alexandria, a place where hundreds of millions of people go to learn about anything and share everything they know," as D'Angelo said in a recent blog post about Quora's mission. That means Quora is starting to look more like Wikipedia, with topic pages; and more like Twitter, with trending topics. Now it's reminiscent of Medium, the blogging platform founded by Twitter cofounders Ev Williams and Biz Stone, which makes the exact same promises about building a platform that connects bloggers with readers.

Quora doesn't release traffic numbers, but the company did advertise some stats for the first time. "Active writers on Quora average 30,000+ monthly views and 350,000+ estimated annual views," according to a press release. "Our most active writers average 90,000+ monthly views and 1+ million estimated annual views. Many great answers on the site go viral — read by tens of thousands of people." Quora decided to add blogs after realizing that users were posting excerpts from their personal blogs on the site, Bodnick said. 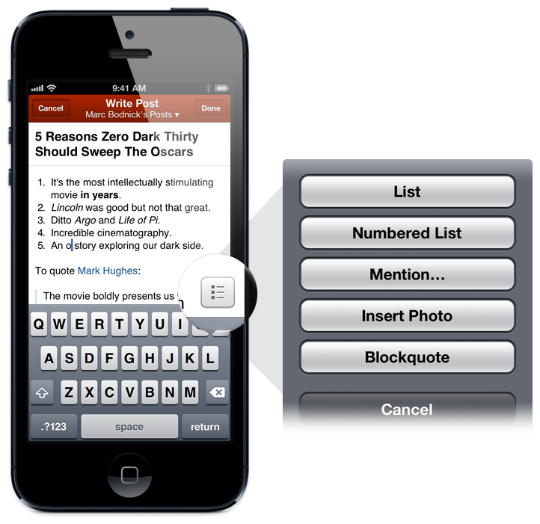 Quora realized users were posting excerpts from their personal blogs

The top answer of 2012, according to Quora staff, was an anecdote about Steve Jobs helping a stranded motorist who broke down in front of his driveway. According to Quora, 88,566 viewed that post. Another Apple-themed post, a story about the company's legendary ability to keep secrets, got picked up by tech blogs and hit 343,593 views. A prisoner's answer to the question, "What does it feel like to murder someone?" got 96,374 views. That isn't viral, Reddit-level traffic, but it's certainly better than what the same writer might have gotten if the post were buried on a personal Tumblr or Blogspot.

The blog feature is also available through Quora's iPhone app. About 25 percent of Quora's traffic is mobile, Bodnick said, so Quora is also coming out with an enhanced mobile text editor in a few weeks.

There is one major drawback to blogging on Quora: the site is kind of ugly. It's text dense, mostly red and white, dotted with tiny thumbnails that surface for user avatars. For bloggers, there are only two options for themes: "a basic themeless view" and the minimalistic "loose leaf theme." Quora implies that more designs are coming.

Quora is basically angling to be a high-end content farm

All the recent news out of Quora, and today's shift away from question and answer, give the impression of a product that is still in the testing phase. Feature updates feel more like experimentation than a roadmap. For example, Quora had previously launched a feature called "boards," topic pages managed by users. The company said today that all boards will be converted to blogs.

According to AppData, which measures the fraction of Quora's audience that log in through Facebook, the site has around 520,000 monthly active users and around 60,000 daily active users. Those numbers are nothing to sneeze at, and that doesn't include people who signed up with an email address or read the site without logging in. According to Alexa, Quora is the 684th most popular site in the world.

But Quora is basically angling to be a high-end content farm, with few obvious options for revenue other than advertising. That means it will need to put up huge traffic numbers if it wants to become as relevant as Wikipedia (or ancient Egypt's Library of Alexandria). Perhaps becoming a blogging platform will help accomplish that.