Cupertino has another record quarter and narrowly beats the Street

Importantly, iPhone sales were a record 47.8m compared to 37.04m iPhones a year ago and 26.9m iPhones last quarter, and iPad sales also set a record at 22.9m sold, compared to 15.43m last year and 14m last quarter. Overall, Apple moved some 75m iOS devices last quarter. Interestingly, Mac sales during the holiday quarter were down to 4.1m from 5.2m last year, while the iPod continued its predictable slide, with the traditionally strong holiday sales coming in at 12.7m from 15.4m a year ago.

The results narrowly beat the consensus Wall Street projections, which had Apple posting a $12.8b profit on $54.8b in revenue. Apple also beat its own estimates, which were $11b in profits on $52b in revenue. Even still, that may not be enough for investors, who are hammering the stock in after-hours trading for being "light on revenue." 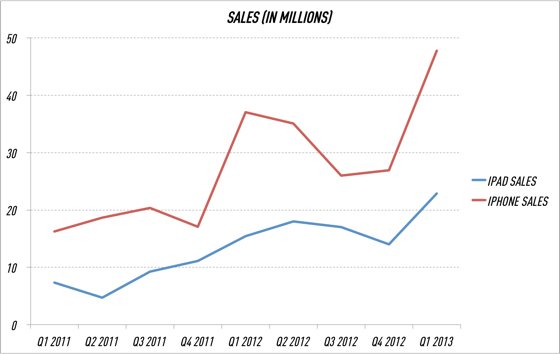 Here's the total breakdown of sales across product lines: 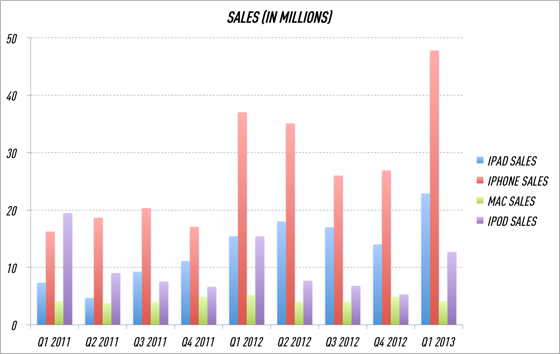 CEO Tim Cook and CFO Peter Oppenheimer will make remarks and answers questions from analysts at 5PM ET — check our live blog for all the news as it happens.

Update: Apple is providing some more insights on its earnings call. See our live blog for the latest updates.