The company's big quarter shows it has crawled out of Qwikster jail, but the table is getting more crowded

When Netflix CEO Reed Hastings is sleepless, what's keeping him awake isn't watching one more episode of Arrested Development or nightmares of Carl Icahn taking over his company's board. It's subscriber growth. How to get subscribers, how to retain them, and how to make them happy without overspending for content.

That's how Netflix shattered expectations for the fourth quarter of fiscal 2012, even its own. Three months ago, Hastings said new international markets would put the company in the red; it broke a profit anyway, surprising analysts who thought it would be $8 million going the other way. International subscriber numbers beat Netflix's guidance, hitting 6.12 million, a record quarter-over-quarter growth. And in the US, Netflix cleared the top of its projections, getting to 27.15 million streaming subscribers. Even DVD subscribers seem to be heading to a happy equilibrium; they're down slightly to 8.22 million, but nowhere near the multimillion subscriber losses from its 2011 price hikes. Netflix subscribers are happier, and they are growing everywhere.

In the middle of the 2011 fallout over charging separately for DVD rentals from streaming, followed by the Qwikster debacle, Hastings said that Netflix's brand had three years to recover. On tonight's earnings call, he said that controversy had left "an echo and a bruise," and that Netflix was still "on probation" with customers. "So we're out of jail," he said, "but we still have a year and a half of probation."

So Reed Hastings is still worried. By the end of the call, though, he freely speculated on what digital video would look like in six to eight years — with Netflix streaming immersively around the home, controlled from the iPhone 10, and the company trying to reassess its relationship to cable operators and programming networks with a base of 50 to 60 million subscribers. With these 2012 numbers at his back, Hastings doesn't seem too afraid that Netflix's parole will be revoked.

Netflix is no longer weak, but neither is anyone else

Subscriber growth has always been Netflix's go-to metric, from its earliest days pushing DVDs through the mail. Over the years, it's built itself on mailers and on streaming, it's made money and lost money, it's been the darling of Wall Street and its dog. All that time, its consistent subscriber growth was what made Netflix seem inevitable; when subscriber growth began to sputter, it suddenly seemed weak.

Talk up your ghosts, talk down your targets

Now, Netflix is no longer weak, but neither is anyone else. Amazon is making serious plays for Netflix's content and subscribers. Hulu Plus has doubled its subscriber base in the past year. Both, like Netflix, are investing in original and exclusive content.

You can tell how strong the competition in digital streaming is growing by how much Hastings attacks other companies in his letter to shareholders. If they're nowhere, he talks them up. "HBO is coming," he'll warn, solemnly, like like he's the lord of Winterfell in Game of Thrones. Now that HBO and Netflix are actually competing head-to-head for stand-alone subscribers in the Nordics, he barely mentions them.

"When it comes to the most popular content," he writes of Amazon Prime, Hulu Plus, and Redbox Instant, "none of these services are good substitutes to Netflix." He also politely reminds everyone that none of Netflix's competitors can beat its budget or its tech. Internationally, he writes that "given this heightened competition, we’ll say a little less about country by country results than in the past, to avoid inadvertently helping our competitors." The difference in tone is everything. It's game time now. 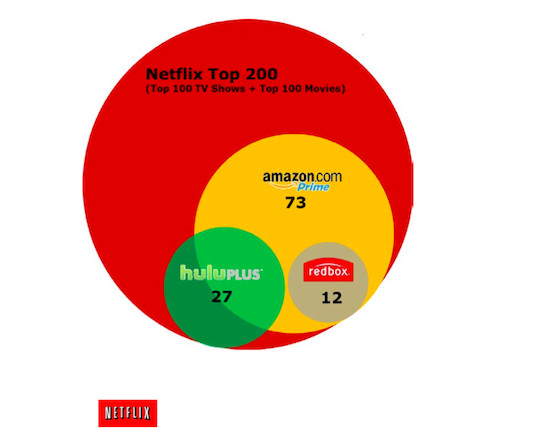 Hastings knows that the market for digital video is enormous. He doesn't have to evangelize Netflix's strategy any more by pointing out how many companies are copying it. He's pinned Netflix's addressable market at 60 to 90 million streaming households in the US alone. Will Netflix get those customers? Will Amazon, Hulu, or Redbox? If they launched a standalone streaming service, would HBO or Apple? How many digital streaming customers would subscribe to multiple services? What's the upper limit? What about cable and satellite (MVPD) customers? How many of them are still looking for somewhere to spend their last $8 to $12? How is a Dish subscriber different from a Comcast subscriber? What can Netflix offer those people that HBO Go can't? To answer those questions, Netflix needs something exclusively its own — not just different series, but an experience that you can't find anywhere else.

A House of Cards or something more

So now, it's all about evangelizing the original programming. And here, Netflix's strategy is quite different. "We believe that February 1st will be a defining moment in the development of Internet TV," Hastings writes. Full stop. Paragraph break. In less than two weeks, Netflix will release every episode of its big-budget drama House of Cards simultaneously. No dragging of the calendar like HBO to make sure you're rung up for at least four months of The Sopranos. Netflix is betting its future on this.

Imagine if books were always released one chapter per week, and were only briefly available to read at 8pm on Thursday. And then someone flipped a switch, suddenly allowing people to enjoy an entire book, all at their own pace. That is the change we are bringing about. That is the future of television. That is Internet TV.Netflix is reluctant to definitively predict a subscriber boost for either House of Cards in the first quarter of 2013 or Arrested Development in the second. "Some of us are optimistic that it may be substantial, but we really don't know," said Hastings.

"Is Arrested Development a content expense or a marketing expense?"

But when he's less guarded, Hastings seems to be predicting big things. "Is Arrested Development a content expense or a marketing expense?" he mused, explaining how Netflix doesn't need to make a big traditional advertising buy. "The huge benefit is we don't have to advertise '8PM on a Thursday night, tune in'," for a series unfixed from any date and time, Hastings said. "This lets us be much more efficient in our marketing."

Still, as Hastings points out, no one has really tried this before. What will happen? Will people plow through the episodes all at once? Will House of Cards generate HBO-level buzz? If it does, will nonsubscribers sign up for a free month, watch all the episodes, and then cancel? Will fans rewatch every episode of Arrested Development when they're finished? How else will they engage? Hastings says all of this information will inform its content strategy going forward.

The data, the data, the data! Just imagine the engagement data Netflix will have for original series, for exclusive content, for the back catalog, for every device, for separate queue profiles for users in a household. For a numbers-driven company like Netflix, this is like putting television into a supercollider. We can finally see its elementary particles, and see which model is right, and which is dead. 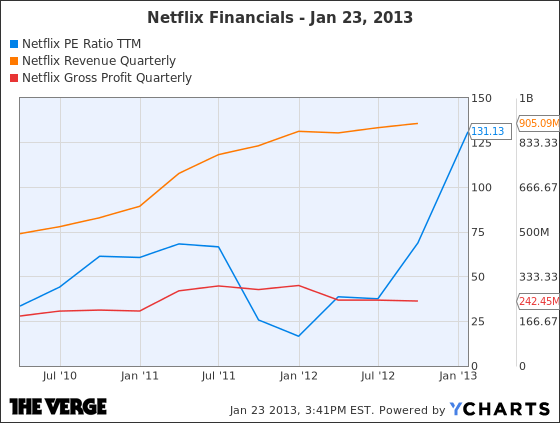