The entire stock market, not just tech traders, were interested to see how Apple would do today. "The market has held up incredibly well while Apple got crushed from September onward," said Philip Pearlman, the editorial chief at StockTwits. "You wouldnt have thought it possible because Apple was such a leader. If the news is good and Apple rallies, the broader market will rally with it, and so everyone, even those who are not invested in Apple long or short, is interested."

Well, Apple reported record revenues, an eye-popping $54.5 billion in just the last 90 days. On top of that it raked in a record profit $13.1 billion. iPhone sales and iPad sales were both record highs. And yet the company fell in after hours trading. If you were to compare it to the other tech stocks who reported earnings, it might feel like Apple is in a different universe. Google missed its marks and was up 10 percent. Netflix made a tiny profit of 13 cents per share and jumped up nearly 40 percent. Yet even as it breaks records and mints cash, Apple's stock can't seem to recover its momentum.

Traders were inspired to some dark humor.

As StockTwits founder Howard Lindzon explained to The Verge last week, "The company has never traded on its profit, it's the exact opposite of Amazon. Apple has been rewarded for its innovation. The market is expecting more magic. Apple is kind of stuck, for a company that executes so flawlessly. They are printing money, and the market doesn't care."

If you're an Apple shareholder, it's probably a pretty frustrating time. All signs seem to indicate Apple needs a new narrative: a TV, better software, or different leadership, because just having the world's best business is not enough. But hey, the company is still paying a cash dividend of $2.65 per share. That's a better return on your cash than you would get storing it at the bank. 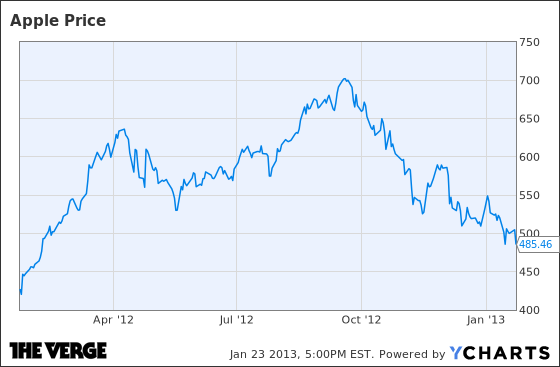