Nokia surprised the 3D printing community last week by unveiling mechanical drawings to allow Lumia 820 owners to print their own case. The company pushed out an impressive Wiki full of details, ten "fascinating facts" about 3D printing, and has been promoting it ever since. However, it's not as easy to print one of these covers as Nokia might lead you to believe.

After downloading the relevant files, I spoke to Nick Allen at 3DPrint UK in London. Allen has a vast amount of experience in printing and 3DPrint UK regularly prototypes a number of parts for various companies. Allen agreed to print the case at a cost of £48 ($75) and I dropped by his office on Brick Lane to take a look at the results.

"Printing the case is OK, but not the buttons."

Allen explains that Nokia's diagrams meant there were points on the case, particularly around the button areas, where it was particularly thin. "Rule of thumb is you should keep it above 1mm," says Allen, with the pinch point of the button areas measuring in at 0.6mm. Because of this, and the thinness of the buttons, the results weren't quite what I expected. The power, camera, and volume buttons had split due to their thinness, and the sidewall that houses the buttons was starting to split. "Printing the case is OK, but not the buttons," explains Allen.

Unperturbed by this, I tried the case on a Lumia 820 and the 3D print successfully snapped onto the phone tightly. The case of Nokia's Lumia 820 is one of the most difficult smartphone cases I've had to remove, so removing the 3D printed case was challenging. I removed it from the top corner of the device and it immediately shattered on the weak side near to the buttons, cracking along the back close to the camera. Allen had warned me that it would likely break due to the thin edge where there's a lot of force on the case.

"I really like the fact they've released it, but I think they've gone at it by simply releasing the injection molding version which isn't the best way to do it," says Allen. Part of Nokia's promotion involved MakerBot printing its own shell with an "optimized" version of Nokia's files. Looking more closely at the buttons, Allen and his team rejected the idea that the Makerbot would accurately print the buttons so you could use them in daily use. "The machines that tend to be stronger tend to be lower resolution," explains Allen. "It's all around the button areas, that's the issue." 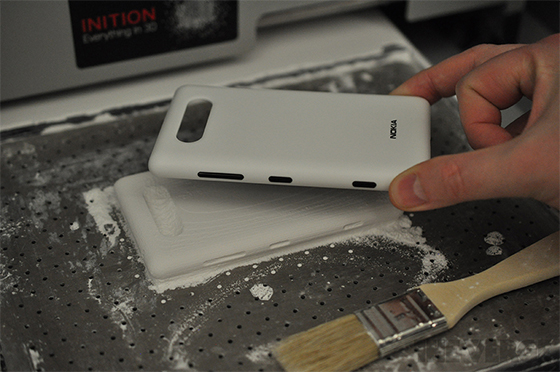 "People need to do a lot of research before they get a print made."

Inition, a fellow 3D printing company in London, agreed with Allen's assessment and offered to print a Lumia 820 cover to compare results. Ed Rawle, Inition's 3D printing technician, printed the Lumia 820 case using Nokia's files and a $40,000 Zprinter 450. The results were almost identical, the case cracked at the same point upon removal. Inition's 3D printing and scanning consultant, Paul Armand, warned that it might not be as simple as phoning up a 3D printing company and supplying the files. "People need to do a lot of research before they get a print made," he explained, noting the differences in machine types. On the topic of using the Makerbot to print a fully working case, with buttons, Armand says it's "questionable" and that you'd likely need to tweak Nokia's diagrams to make some parts thicker. "It's likely made for injection mold," he explained.

The results aren't encouraging for those wishing to print a Lumia 820 cover. Allen has had some inquiries about printing them, but he admits "it's gonna cost you more to print that than it is to buy one off the shelf." While you won't get the customizability that the 3D printed version offers, it's clear that Nokia's diagrams are suitable for injection molding techniques and not typical 3D printers. Others in the 3D printing community agree It's a solid first effort from Nokia, but until there's a Lumia that doesn't require button printing or isn't so tight to the phone body then it's just not ready yet.

Aaron Souppouris contributed to this report