Apogee focuses on the iPad with updated One, Duet, and Quartet multichannel audio gear

Apogee focuses on the iPad with updated One, Duet, and Quartet multichannel audio gear

As if it weren't already obvious that professional musicians are rapidly turning to the iOS platform for music creation, digital audio powerhouse Apogee is planning to update its Quartet studio control center to support the platform. It's also releasing two new iOS-compatible products, and launching a new app that'll run everything. Quartet has worked with Macs for some time, but a new firmware update and the Maestro iOS app will let owners use it with their iPhone, iPod touch, or iPad. The product features four inputs and eight outputs and can be hooked up to a Mac or iOS device via USB; this update essentially lets your iPad act as a multi-channel recording studio.

Apogee says that Quartet will interface with any "Core Audio compliant" app, including Garageband, Auria, and Multitrack — and on the Mac, it'll work with high-powered software like Logic, Ableton Live, and Pro Tools as well as Garageband. All in all, this $1295 piece of hardware is clearly geared at professionals — but for anyone who wants to record multi-channel music on the go, the iPad / Quartet combo appears to be a small and powerful one. The Quartet firmware update, Maestro app, and required 30-pin sync cable will all be available in February.

Apogee is making a strong play for the iOS market

For those interested in doing more advanced iPad recording without breaking the bank, Apogee is also releasing two new products — the One and the Duet. The redesigned, $349 One features a built-in microphone and two inputs and outputs, all tied together with a USB interface that can be hooked up to both Mac and iOS. The small box offers three different input methods — the built-in mic, the XLR microphone inputs, and the 1/4" instrument input (typically used for guitars, keyboards, and other similar instruments). One lets you record from two of those inputs simultaneously, and it also features a built-in headphone amplifier / digital-to-analog converter for listening back to your recordings (or anything else, really). The new One will be available in March. 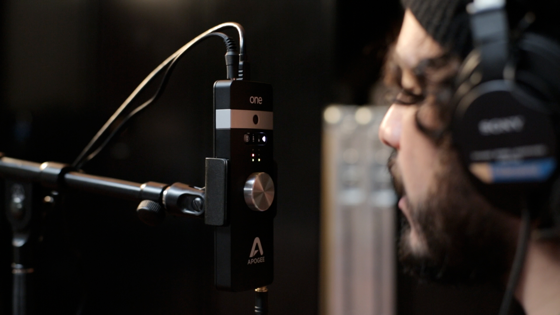 The new Duet is like a beefed-up version of the One — it loses the mic, but provides stereo audio, two analog inputs, two balanced analog outputs, MIDI input and output, and a built-in headphone amp. Like the One and the Quartet, it offers a fully digital direct connection to the iPad and works with the upcoming Maestro app. The Duet will cost $595 when it is released in February. Apogee will be showing off all this new gear at NAMM, which kicks off tomorrow. 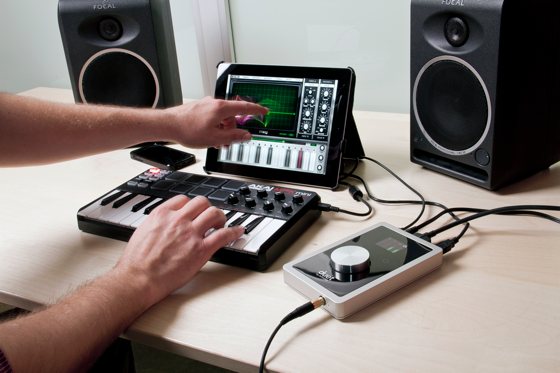