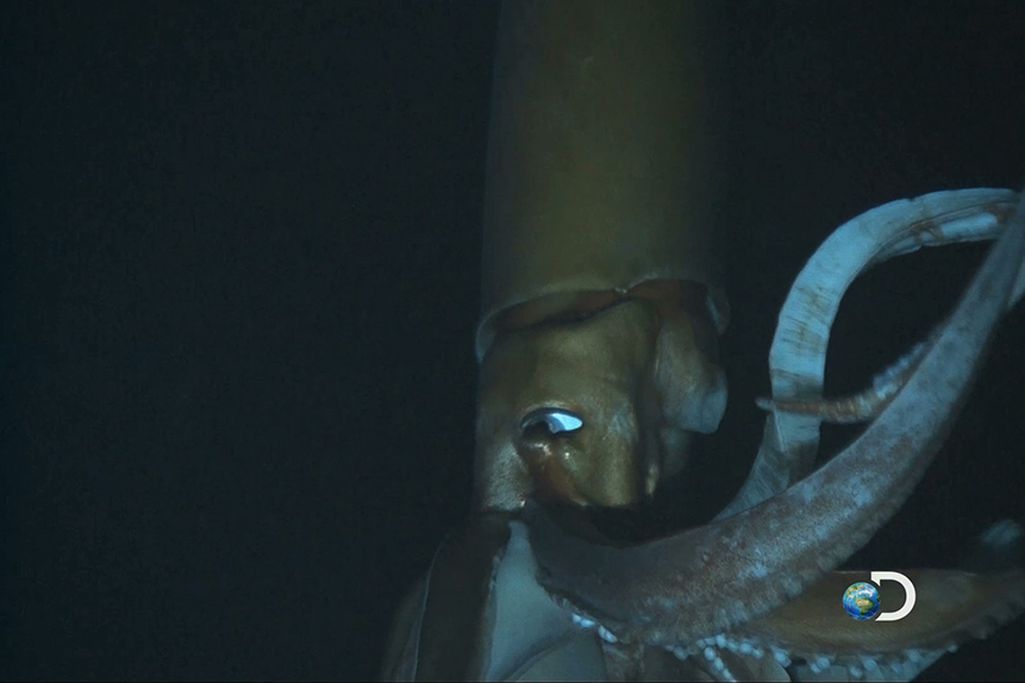 Giant squid – also known also by their scientific name Architeuthis – have been the stuff of both legend and science for hundreds of years. Stories of great tentacled Kraken in Scandinavia and in the scientific writings of Pliny the Elder are some of the earliest indications that such monsters were thought to exist. Giant squid have also left evidence of their existence tangled up in fishing nets and washed ashore all over the world. Despite their massive size (adults can grow up to about 40 feet from tip to tentacle and weigh up to 610 pounds) searching for them has been a needle-in-a-haystack endeavor.

The first video footage of a giant squid in its natural habitat will air this Sunday on the Discovery Channel in Monster Squid: The Giant is Real. The show is the culmination of years of searching, and a successful six-week expedition 550 miles south of Tokyo in June of 2012. 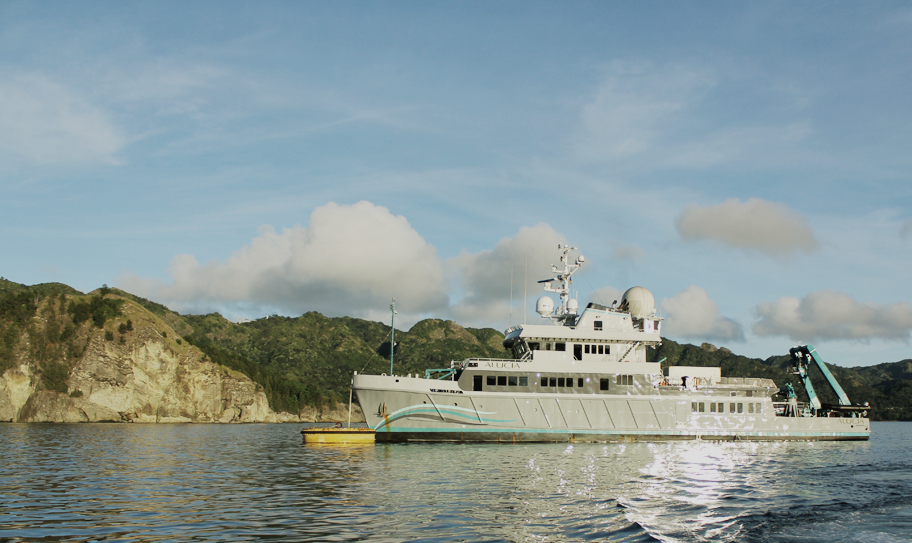 "It’s not that they’ve been evading us,” explains Craig McClain, Assistant Director of Science National Evolutionary Synthesis Center and founder of Deep Sea News. “It's more that our daily activities don't overlap with their daily activities."

Only around five percent of the oceans on Earth have been explored, and everything about the behavior of the elusive giant squid has been inferred from chance sightings at sea and dissecting beached carcases. Unlike its relative the humboldt squid which hunts in schools, the giant squid is thought to be a solitary creature. Also, until about twenty years ago, the best submersibles were made of opaque metals, and no camera could withstand the pressure and cold of the deepest waters.

Discovery and Japanese television company NHK began plotting the ultimate giant squid mission in 2006, but after watching repeated and fruitless attempts by National Geographic and others, there was hesitation about investing resources. But premiere squid scientists Tsunemi Kubodera of Japan’s National Museum of Nature and Science, American oceanographer Edie Widder, and Kiwi renegade marine biologist Steve O'Shea convinced producers that they could find the squid. But they still needed the equipment.

Enter Ray Dalio, billionaire manager of the world's largest hedge fund, who just happened to own a fully equipped research vessel. Dalio made his 56-meter motor yacht, the Alucia, available for NHK and Discovery to charter for the expedition, along with three submersible vessels, one of which is "the sexiest, most contemporary deep submersible that money can buy," according to the manufacturers.

"He really just wanted to have an opportunity to go under water, just he and his family," said Bruce Jones, CEO of Triton Subs, who manufactured the craft used to capture the footage. "Then he decided that since he had these assets, he might as well use them for some scientific progress."

The team knew this was likely to be the last opportunity they had to search for the mythic creature, and on June 22nd, 2012, they boarded the Alucia and set off for six weeks afloat in the vast, blue sea. 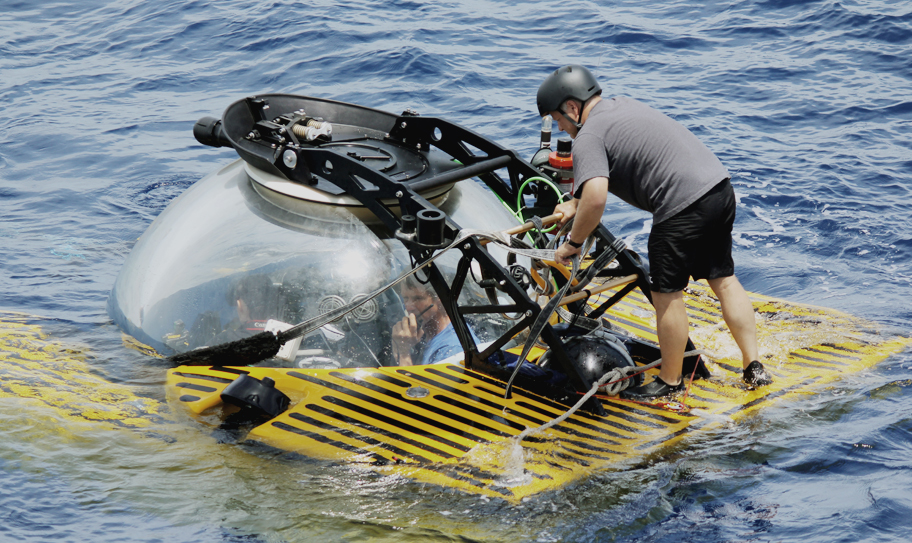 Kubodera had captured still pictures of giant squid near the Ogasawara Islands, so the team used that as a starting point, setting sail from Sagami Bay.

Patrick Lahey, President of Triton Subs, joined the team on the Alucia to train the pilots and crew members in operating the submersibles. Three people would be in a submersible on every dive: a scientist, a photographer, and a pilot. During the six weeks they kept an around-the-clock schedule of missions. Each of the 55 jaunts below the surface lasted eight to 10 hours, and they took full advantage of the sub's capabilities, often reaching its max depth of 1000 meters.

“You are down there and you are absolutely lost in time and space,” O’Shea said. Lahey says, “we all have to be a little bit crazy to do this,” because these expeditions are often emotionally and physically draining on crew members.

Even the world's foremost giant squid researchers know virtually nothing about the way the giant squid behaves in its natural habitat, so they were forced to guess at how to lure it in front of a camera. Each of the researchers took a different approach, with success hinging on one main unknown: do giant squid prefer the lights on or off?

Widder, who has a PhD in Neurobiology and specializes in bioluminescence, sunk to the depths in the dark, extending a glass orb with flashing LEDs as bait. Her goal was to mimic the light display of a deep-sea jellyfish called atolla, which release a glowing chemical while being attacked. She'd observed that smaller squid were attracted to this jellyfish, but had never found any evidence that squid eat them. She concluded that squid were using the jellyfish as a “bioluminescent burglar alarm,” eating whatever was eating the jellyfish.

"You've got this small thing lighting up because this medium sized thing is munching on it, and the goal of the small thing is to get away from what's eating it," she explained.

Widder didn't capture any video footage of Architeuthis while in the submersible, but she did capture five different recordings of giant squids by dangling a “Medusa” — her bioluminescent lures and a camera system — from a buoy on the surface. 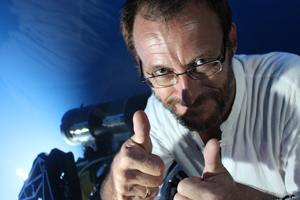 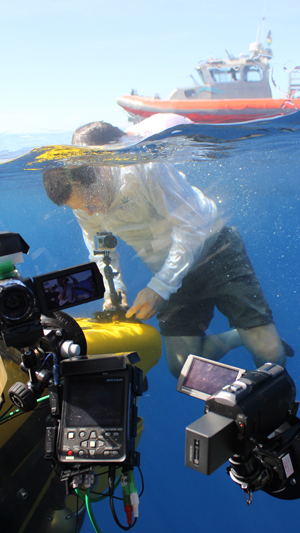 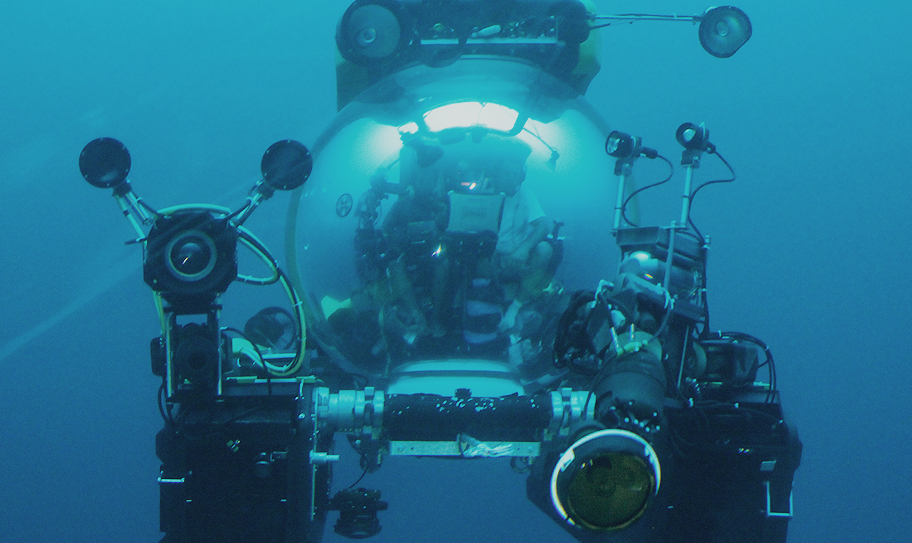 When it comes to speculation on the mental prowess of the giant squid, O’Shea is dismissive. “I think it's one of the most stupid animals in the ocean. The only thing going through that 20 gram brain is eating and breeding.”

In his dives, O’Shea had lots of creatures attack the bait, and even the sub — on a 500 meter dive they once felt a thump from below and found themselves shrouded in a massive ink cloud. O’Shea saw more squid than anyone else during his dives with the lights on, but none were of the giant variety.

In the end, the successful approach was Kubodera’s, who descended like a deep-sea ninja, as quietly and invisibly as possible. Like Widder, he made use of the infrared lighting system and turned off everything electronic in the sub, including the temperature control system. He thought giant squids may be especially sensitive to sound vibrations. He sat staring out into the black abyss for eight hours at a time, cameras aimed at a diamond squid as bait.

And finally, on one lucky occasion, Architeuthis approached.

What followed was an inter-species staring competition. The squid explored the bait suspended in front of the sub, “sitting there for the most of 18 minutes looking beautiful,” as O’Shea put it.

O’Shea and Kubodera have held opposing hypotheses about the giant squid’s hunting behavior for as long as they’ve known each other, and were hoping that finally seeing it in motion would settle the bet once and for all. 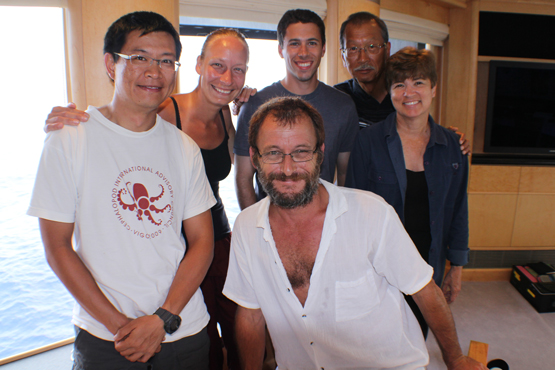 Kubodera thought the animal would be an aggressive hunter darting around and quickly projecting its tentacles out to pull prey into its mouth. "I always thought that it was a dopey, giant thing that was floating at a 45 degree angle through the water column, dangling the two long tentacles down," O’Shea said.

When they watched the video footage, each declared their own hypothesis confirmed. O'Shea says he shed a single tear when he saw the giant squid on video for the first time. "All I felt was overjoyed. It had now been done. We can now relax. We can now move on.”

Back on land, producers at Discovery are ecstatic for the giant squid’s 15 minutes, and grateful their gamble paid off. "Had we not succeeded I'm not sure anybody would have tried again," said Christina Weber, VP for Production and Development for Specials at Discovery. 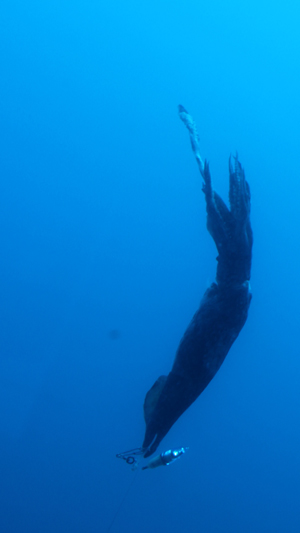 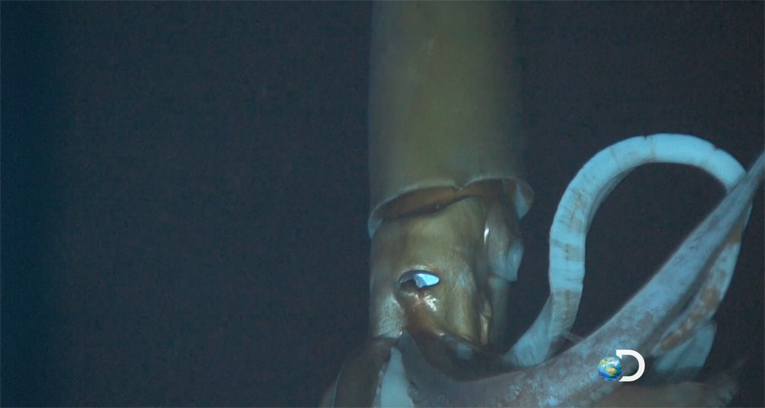 To celebrate the discovery, Dalio flew famous biologist and atheist Richard Dawkins out to meet the research team on the yacht, which Dawkins later blogged about. While the scientists no doubt delighted in breaking new ground, their true bounty was the potential for the giant squid to act as an emblem of the deep, as a symbol with the power to convince the average television watcher of the necessity of preserving the earth's oceans.

The question remains as to whether viewers will see the squid as majestic and beautiful, or as a monster like the show’s title asserts. “We are in the entertainment business. We don't always want to preach to the choir,” Weber said, explaining that putting “monster” in the title was a ploy to lure in an audience beyond the scientific types who are already inclined to tune in.

"We're driven to find all this weird and wonderful stuff on film for you guys, but at the same time what's driving us is conservation. We use these charismatic megafauna as our hook to lure you into far more important matters,” O’Shea said. "People are going to see this on television and start giving a damn about the marine environment.”

The giant squid may have been the holy grail, but it wasn’t quite the final frontier. There is evidence of a squid even bigger than the giant squid out there called the colossal squid. Now that the elements for successful deep sea exploration voyages have been established, it’s only a matter of time before someone attempts to capture the colossal squid in Antarctica.